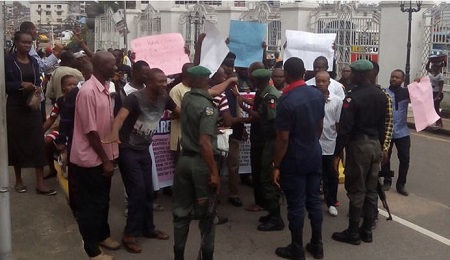 Members of Imo State Association of the Deaf, numbering over 300 on Monday, blocked the entry gate of the Imo State Government House, Owerri, in protest, Punch Metro reports.
The protesters tried to force themselves into the premises of the government house but were resisted by the security men on duty at the entry gate.
The security men fired several gunshots into the air.
The protesters said they wanted to see  Governor Rochas Okorocha, over alleged neglect and abandonment of their ‘welfare packages and annual subventions.’
Their chairman, Mr. Uzoma Edwards, who spoke to newsmen through an interpreter, a Catholic Church Reverend sister, said that for the past 12 years, their annual subventions totaling N12m had not been released to the association.
The group also alleged that the government had ‘grossly marginalised’ members of the association in employment, empowerment opportunities, and official programmes.
The protesters said the state government treated them ‘badly’ because they cannot talk and had no ability to air their grievances through verbal communication.
The association’s chairman said members were angry that the state government had yet to approve its proposal for the state to host the sixth edition of the National Deaf Football Championship in 2018.
While demanding two vehicles from the state government for members’ use, the protesters also sought to be included in the government’s empowerment of 305 millionaires which was concluded by the state government last week.
“We demand an allocation of land, reopening of the office of the Special Assistant on Deaf Matters to the Governor and the revival of the dying special education in the state.
“The government should also relocate the primary school for the deaf situated on Wetheral road, Owerri, to a safer and more conducive environment.
“We are also crying for lack of employment opportunities.”
As of the time of filing this report, no government official had addressed the protesters.
Meanwhile, the protesters have maintained the barricade to the entry, causing people who want to access the Government House to be stranded.
Commotion as 300 Deaf People Block Imo Government House, Demand N12m Subvention was last modified: July 24th, 2017 by Arinze Ago