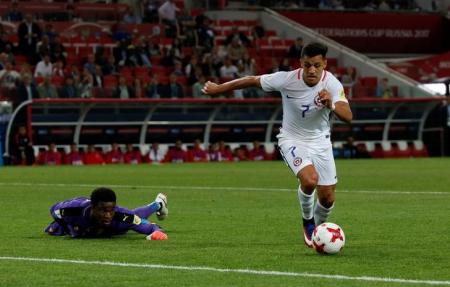 Arsenal star, Alexis Sanchez was the hero of the night after assisting a late goal to inspire Chile to a 2-0 victory over Cameroon in their opening Confederations Cup outing on Sunday.

Sanchez who came on as second half substitute however looked to share the spotlight with the video assistant referee.

Sanchez provided the cross for Arturo Vidal to head home their 81st minute opener and inspired the second goal as well. He beat the offside trap but failed to score. Eduardo Vargas was on hand to put the ball into the net in the dying seconds.

The Video Assistant Referee (VAR) also made an impact as Chile were denied a legitimate looking goal on the stroke of halftime and technology was used again at the end of the match to overturn a linesman’s offside call.

Vargas had the ball in the net as the match moved into stoppage time at the end of the first half, deftly lifting it over the onrushing Cameron goalkeeper Fabrice Ondoa after being expertly fed by a defence-splitting pass from Vidal.

Slovenian referee Damir Skomina initially awarded it but then, more than minute later, he suddenly reversed the decision on the advice of the VAR, Clement Turpin of France.

Vargas looked to be millimetres ahead of the last man in a tight call that was hotly contested by the angry Chileans as they headed down the tunnel for the interval.

But Vargas was on the right side of technology for Chile’s second as Sanchez sprung the offside trap from just inside the Cameroon half to round the goalkeeper only to have his own effort blocked. Vargas followed up the rebound only to see the linesman’s flag shoot up.

There was no dispute about Vidal’s goal as he rose above two defenders to power home the ball as Sanchez, who had been ruled out of the starting line-up through injury but came in early in the second half, provided the perfect assist.

The African champions came closest when captain Benjamin Moukandjo hit narrowly wide with a shot from the edge of the penalty area midway through the second half.