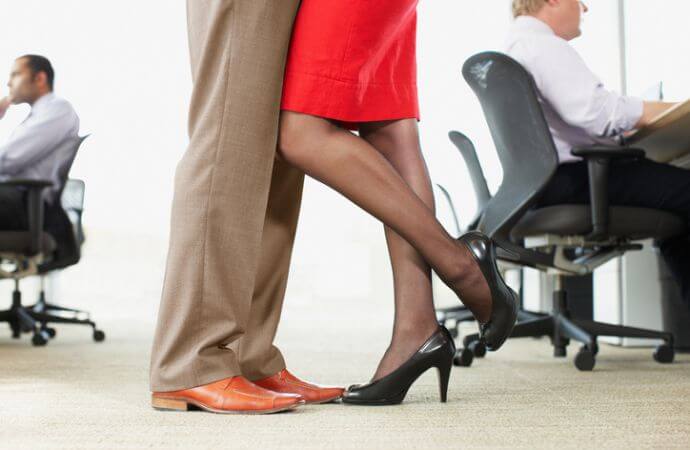 You have your eye on someone at work and are ready to pursue an intimate relationship, but have you thought about whether you’re ready to share your personal and professional space with them?

Relationship coach Paula Quinsee tells us about six things you should consider before starting an office romance.

Quinsee says your performance at work could suffer. “The relationship could affect your work performance in that the personal situation could get in the way of the work environment,” Quinsee says.

Kendal O’Bryan’s partner is a boss at the company she works for, and she says her biggest challenge is separating home and work.

“If something happens at home, I tend to carry that anger or excitement with me to the office. We work in quite a nice environment, so it’s not so much of an issue, but it is a bit of a struggle,” she says.

O’Bryan says that it does affect her work performance. “If I’m angry, I tend to be quite spiteful and less focused at work as I would be on a normal day,” she says.

“Before even starting the relationship, it’s important that the two parties investigate what the company policy says about colleagues being in intimate relationships with one another. Certain companies have very strict policies about inter-company relationships,” Quincee explains.

“They would have to check if there are any rules and regulations against them pursuing a relationship. And if they’re allowed to, they need to look at what protocol has to be observed in their pursuit of the relationship.”

Quinsee advises that individuals refrain from pursuing a relationship if one person is a direct supervisor or line manager to the other.

“This brings all sorts of complexities not only to the workplace but also into the home environment.” She says that the person in the subordinate position may be perceived as “sleeping their way to the top”, which can create animosity towards the individual in the less senior position.

O’Bryan’s other half is the managing partner of the company she works for, which creates a divide.

She adds that while it might not necessarily be explicit, she’s noticed that her colleagues treat her differently because of her relationship.

“I find that people are often afraid to tell me about how they really feel fearing that I might go home and tell my partner,” she says.

Disclose the relationship to HR

“If the company policy doesn’t prohibit workplace relationships, it’s still a good idea to disclose the relationship to the right people such as the human resources department and/or your direct manager. This is so that people are in the know and can handle any situations that may arise as a result of the relationship,” Quinsee explains.

Kay Mosiane, who works for the same company as her partner, says that generally it’s been a great experience but that there have been several things they’ve had to be conscious about in the workplace.

She didn’t have to disclose the relationship to their employer because she and her partner were already together when they both joined the company.

Setting boundaries between the workplace and the home

“[People in a relationship] would have to set healthy boundaries as far as what they share from a work perspective – this is especially important if one party deals with confidential information. They should also not bring problems they might be experiencing at home as a couple into the office,” Mosiane explains.

Mosiane says she and her partner work closely together even outside of the office because they’re also in a band together. This has meant that they’ve had to set strict boundaries when it comes to discussing work at home.

“We have a clear, strict work-is-work policy and home-is-home policy because we work so closely with each other and can’t allow that to spill over into the workplace,” Mosiane says.

Don’t disclose too much to colleagues about the relationship

“Some people tend to disclose a bit too much about what’s going on at home in the workplace because they trust a particular colleague or see them as a friend, but this could create a situation where everyone knows your dirty laundry and it could negatively affect the relationship,” Quinsee says.

Mosiane agrees. She says she and her partner learnt this outside of the working environment and stuck to that lesson when they started working together.

O’Bryan says she doesn’t discuss her relationship with anyone in the office because she believes it would make things awkward, especially because her partner is not only her boss but everyone else’s as well.

What to consider before getting into a relationship with a co-worker was last modified: April 5th, 2017 by Arinze Ago

What Women Want In The Man Of...

The Walk Of Shame

5 Destructive Topics You Must Not Bring...