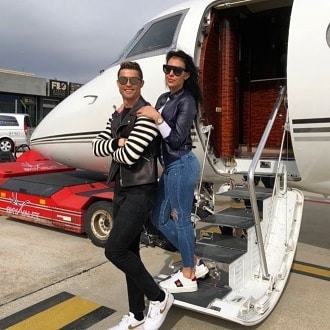 Portuguese professional footballer who plays as a forward for Spanish club Real Madrid and the Portugal national team, Cristiano Ronaldo, has reportedly engaged his girlfriend, Georgina Rodriguez, with a Cartier diamond ring worth £615,000 ($836,051.91 or N300m).

Georgina, the shopkeeper-turned-model fuelled speculations that the pair are engaged after she showed off a sparkling ring in an Instagram video.

Cartier advertised a look-alike engagement ring and recently uploaded a picture of it on Instagram with the price tag of £615,000.
Georgina, who has 4.6 million followers on the social media site, commented with a string of heart emojis.
The pair have kept tight lips over a future wedding, even though they already have a daughter together.

Georgina sat in the passenger seat of the ex-Manchester United ace’s luxury motor when she showed off the new rock.