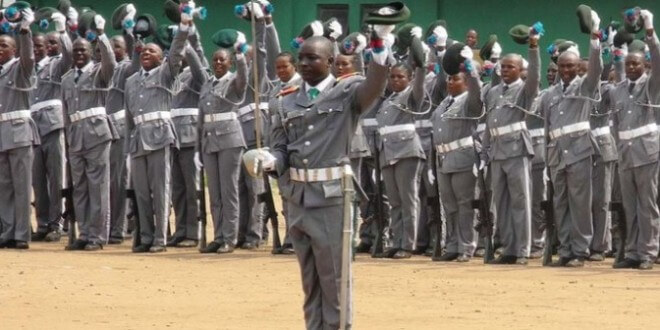 The Federal Operations Unit (FOU) Zone A of the Nigeria Customs Service (NCS), has intercepted bales of police Uniform, tear gas canisters and other paraphernalia of the Nigeria Police Force.

Other items include police ranks, belts, berets and police badges with identity cards. The items were concealed in a Toyota Sienna space bus heading out of Lagos.

The Customs Area Controller of the Unit, Muhammed Aliyu said a suspect was in the custody of the unit in connection with the seizure.

He said the items seized portend big threat to national security as it is destined to get to the wrong hands.

“The seizure is a threat to national security because the uniform can be used for kidnapping, Boko Haram or elections but generally, it threatens national security,” the unit controller said, adding that the police identity cards seized have no name on them.

He affirmed that the seizure is of great concern because it concerns the national security of the country because of the havoc it can be used to wreck.