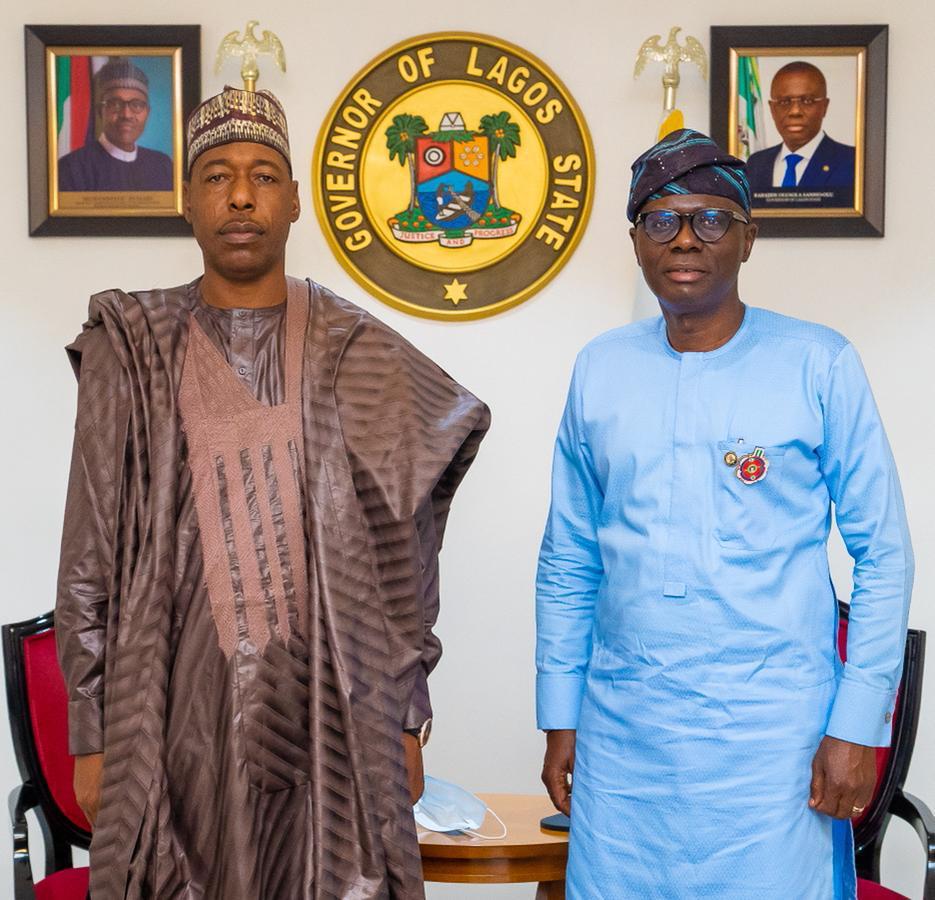 Lagos State has continued to receive solidarity and support from well-meaning leaders across the country in the aftermath of the last month’s coordinated destruction of public assets and private properties instigated by the hijack of youth protest.

On Saturday, Borno State Governor, Prof. Babagana Umara Zulum, led political leaders from the Northeast region of the country on a commiseration visit to Governor Babajide Sanwo-Olu and the people of Lagos over the attack.

Zulum and his entourage, which included his predecessor and lawmaker representing Borno Central in the Senate, Senator Kashim Shettima, were received by Gov. Sanwo-Olu at the State House in Marina.

After watching the ugly images of the destroyed assets, the Borno Governor described the attack as “mind-boggling”, noting that the violence was deliberately contrived to hurt Lagosians.

Zulum said the proportion of the destruction was too much for Lagos to bear, stressing that the cost of rebuilding the State would bring about discomfort to residents and citizens whose businesses are tied to the peace in Lagos.

He said: “We are here on behalf of Governors from the entire Northeast region and its people to commiserate with the people of Lagos and their Governor over the recent unfortunate incident of violence happened in Lagos, which left wanton destruction of both the public and private properties.

“While we strongly condemn any form of brutality by the police in any part of the country, we also condemn what has happened in Lagos. The destruction was engineered to hurt this blooming State and its economy. We condemn the excesses of the youths who took to violence to express their grievances. There was no need for the violence when the authorities had already conceded to their demands.”

Zulum likened the style of the destruction of key Lagos Government assets to the manner with which Boko Haram carried out attacks on public utilities, noting that it could take years for Lagos to fully recover from the wreckage.

The Governor urged young people across the country and in Lagos to always use non-violent means to express their grievances, pointing out that destroying infrastructure meant to serve the public shouldn’t be an option in public protest.

He also advised those bent on staging another round of protest to allow the wound left by the destruction and looting of properties to heal. He said Governors had been working with the Federal Government to ensure victims of police brutality get justice and compensation.

Sanwo-Olu said the attacks had not weaned away Lagos’ ability to turn around its misfortune to opportunities, hinting that the State would come out stronger and better.

Sanwo-Olu particularly expressed appreciation to his Borno counterpart for identifying with Lagos, despite being faced by security challenges. The gesture, he said, stands Zulum out as a fearless leader.