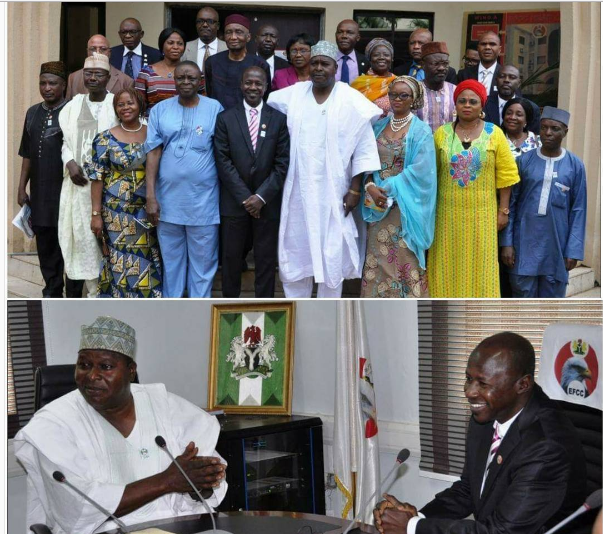 Director General of the National Council for Arts and Culture, NCAC, Olusegun Runsewe, has commended the Economic and Financial Crimes Commission, EFCC, for its unrelenting efforts in championing the anti-corruption crusade of the President Muhammadu Buhari-led administration.

He also stressed the important role that the implementation of the Bank Verification Number, BVN, and the Treasury Single Account, TSA, have played in aiding the efforts of the EFCC at nabbing treasury looters.

“We want thank you for re-inventing a culture of forthrightness, and re-orienting out value system so that Nigerians see that corruption does not pay,” he added.

According to him, “66 per cent of criminals arrested outside of the country are not Nigerians, but impersonators, who illegally obtain the international passport of the Nigeria”.

Ibrahim Magu, acting Chairman of the EFCC, who received him and the NCAC management team, appreciated the gesture, and used the medium to call for collaboration with the Council.

“Corruption has eaten so deep into the fabrics of our society and it’s a major threat to the unity of our country,” he stressed.

The reality, he noted, calls for a common consensus among all Nigerians, aimed at ensuring a better future for the country.

He also stressed the need to “stop celebrating corrupt people, and let them know that corruption is evil and it should be shunned”.

SHOCKING! Nigerian-Man Threatens To Go On Killing Spree If…