Home News DID YOU SEE THE CAR LADY MAIDEN IBRU DROVE ON HER 70TH BIRTHDAY?
News 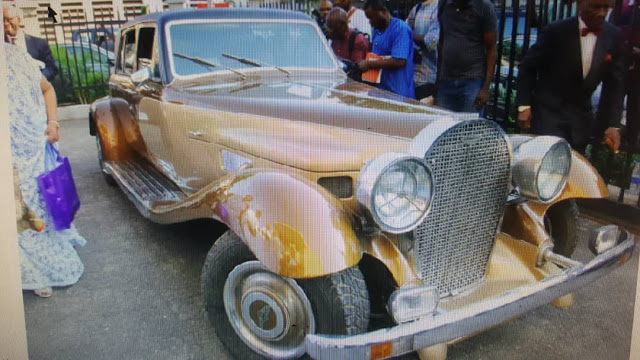 Yes, we saw it, if you didn’t see it. So, let’s tell you about it now! Many of the guests who stormed the recent 70th birthday of The Guardian Publisher, Lady Maiden Ibru missed how she arrived her church service in her husband’s old vintage limousine. City People saw this stylish woman as she arrived and left in this rare automobile. She came in a Panther Derike Car that was bought by her late husband Alex Ibru in the 1980s. It is a Classique car. Many thought it was a Rolls Royce. No. It’s not. Let’s tell you more. The car is no longer being made and so the value has gone up because it has become a collector’s car. And wait for this! Only few people in the world have the car today.

Let’s tell you more. Lady Maiden Alex Ibru is the Chairman, Publisher and the Chief Executive Officer of The Guardian Newspapers. She is a Public Affairs and Communication Consultant, Media Executive and Newspaper Proprietor. Lady Maiden Alex Ibru graduated from the premier University of Ibadan in 1972 and holds a Master’s degree in Communications and Media Studies from the American University of Washington DC (1974).

Her role in The Guardian, an independent newspaper, established for the purpose of presenting balanced coverage of events, and of promoting the best interests of Nigeria is to ensure that it owes no allegiance to any political party, ethnic community, religious or other interest group. Its primary commitment is of the integrity and sovereignty of Africa.

Lady Maiden Alex Ibru’s chief task involves the translation of this corporate philosophy into real, measurable outcomes through the various companies’ titles, helping to strengthen the newspaper in the face of attacks on its independence by military establishment. Our insistence on democratization brought the newspaper into direct conflict with the military and the newspaper was shut down twice.

Since 1999 when she became the Chief Executive Officer, the policy formulation function has entailed mobilizing the staff and providing Leadership in the direction of monitoring Nigeria’s democratic process. In the face of threats to Nigeria’s democracy, strong Leadership is required in strengthening the resolve of an independent paper.

Guardian Newspapers Limited deals with editorial functions whilst Guardian Services Limited provides support services for the newspaper company. Lady Maiden Ibru oversees both the editorial and business operations to ensure a smooth running of the organization. Our policy concerns in this regard include responsible corporate citizenship, quality assurance, staff welfare, and value creation processes.

She is a Director of several companies and Foundations but the one closest to her heart is Trinity Foundation founded by her late husband Dr. Alexander Ibru (honararicausa). It is a philanthropic organization set up to provide financial and infrastructural support for institutions in civil society which promote democratic principles, the objectives of an open society, the common good and the equality of persons. The foundation has built and donated to the Anglican Church, an Ecumenical Centre in Agbarha-Otor, and his howntown in Delta State, Nigeria.

In 2007 the Greek Parliament conferred on Lady Maiden Alex Ibru the “Golden Cross of Welfare”, and in 2012 the Orthodox Pope of Alexandria, Egypt and Africa conferred the Ladyship title of “The Cross of St. Mark” on Lady Maiden Alex Ibru. Lady Ibru is very passionate about education and has privately financed scholarships for brilliant but indigent students in both secondary and tertiary institutions. She is a quiet philanthropist.

In 2014 she was given an award SP(FRN) Special Philanthropies of the Federal Republic of Nigeria, by CECP-(Nig) Committee Encouraging Corporate Philanthropy. Lady Maiden Alex Ibru received an award from Manchester University in recognition of her distinguished service to the society. In September 2014 she got a National Award MFR (Member of the Order of the Federal Republic of Nigeria).

DID YOU SEE THE CAR LADY MAIDEN IBRU DROVE ON HER 70TH BIRTHDAY? was last modified: November 29th, 2019 by Reporter

‘Magu is a man of integrity, though...