Why I Don’t Joke With My Wife, SADE LAGOS Senator, GBENGA ASHAFA 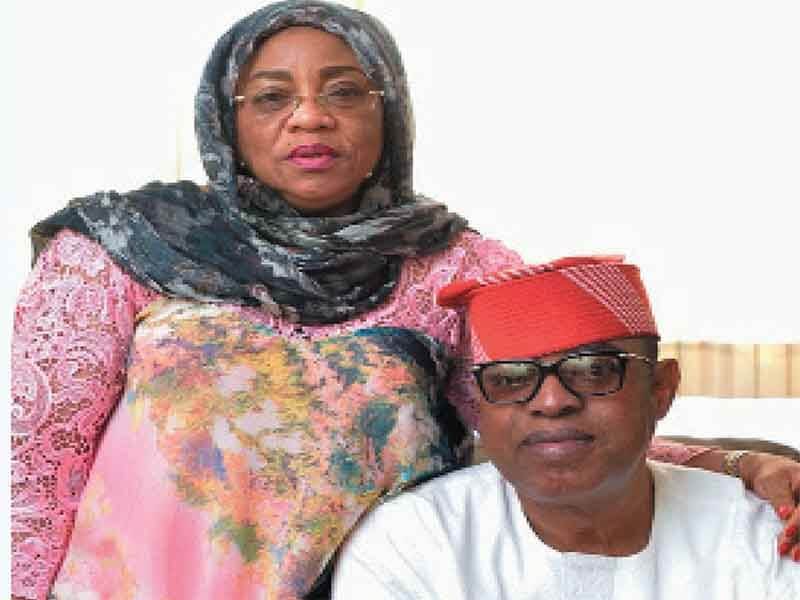 Two Mondays back, Mrs. Folashade Omobola Ashafa (nee Edun), the wife of Senator Olugbenga Bareehu Ashafa turned 60 and there was a big party to celebrate it. She has been happily married to Senator Ashafa since 1979. She is a seasoned administrator, who retired as an Assistant Director at the Federal Ministry of Information and Communication in 2005, after 23 years of service. They are blessed with children and grandchildren.

Senator Gbenga Ashafa and his delectable wife, Folashade, are one of Nigeria’s celebrity couples you will always admire. Not only has their marriage of 38 years which was consumated in London been successful and produced successful kids, but their love has not stopped  waxing stronger each day.

Though they are of the same age bracket, Senator Gbenga Ashafa being 62, while his pretty wife, Folasade  is 60. His wife accords him all the respect he deserves as the head.

Have you ever sighted them at parties? In case you are new on the  Lagos Social Radar, let’s  tell you how Senator Gbenga Ashafa used to dot on his wife, Shade. They walk into any social event side by side holding hands. Senator Gbenga Ashafa always looks out for his wife at parties. They always attend party together and leave together. They are always close at events.

That was the same way he dotted  on her  last week, Monday 29th of May, 2017. They walked in holding hands at Civic Centre, where his wife’s 60th birthday took place. He was with her at the podium as they received guests, who came to share in their joy. Despite that the wife is a Christian, and the husband a pious Muslim , Senator Gbenga Bareehu Ashafa doesn’t allow religion to destroy their love for each other.

He danced to one of his wife’s favourite musician, Tope Alabi’s lyric. The way Senator Gbenga Ashafa, adores and shows affection to his wife is not a suprise to those who are close to this celebrity couple. They are known to be like that for decades.

Ask around town and people will tell you  Senator Bareehu Olugbenga Ashafa has eyes for only his wife .

Oba Rilwan Akiolu also gave an insight into why Senator Gbenga Ashafa never jokes with his wife during the special Muslim prayer held at Grandville  Magodo. His words: “Gbenga Ashafa could only have achieved much because he had a good wife, who gave him peace of mind and kept the home solid.

City People got Senator Gbenga Ashafa to speak about his pretty wife. He spoke glowingly of how he never jokes about her.

“This is the day the Lord has made to happen and I shall forever glorify His name. My wife’s 60th birthday 29th May, 2017, is a day that we have been looking forward to and we thank God that God made this day possible. All our guests from far and near are here celebrating with us. She is a virtuous woman, who have been with me for 38 years. So it’s been 38 years of a blissful marriage.

I want to thank her for giving me 3 beautiful children, who have brought forth 6 grandchildren. Glory be to God. She is a very beautiful woman. She is respectful and an African woman, who is educated. She is traditionally and morally inclined. She is very goldly. Shade is my spiritual fortificator. She fortifies me with spiritual prayers all the time. I love her and I pray that she will live to be 70, 80, 90, and 100. I pray Shade that you will live long Insha Allah. I love you my baby”, he revealed.

Who is Senator Olugbenga Bareehu Ashafa? Let’s tell you a little about him. He was born at the Luther/Bamgbose/Campos area of Lagos Island on 22 July 1955. He is the second child of a commodity merchant, Lawal Kakanfo Ashafa, and a textile- and Gold merchant, Tesmot Ojuolape Elemoro.

The young Ashafa started his education at Christ Church Cathedral Primary School, Broad Street, Lagos in 1961. His aptitude for ledership started manifesting early in life, while at Christ Church Cathedral, he was the Class Monitor from Standard 1 to Standard 6. He graduated with distinction at the Common Entrance Examination in 1968 and went on to CMS Grammar School, Lagos. At CMS Grammar School, he was Class Captain from Form 2 to Form 5. He was an avid football player (the goalkeeper), and a member of the school choir. He was also known to be a passionate table tennis player in the neighbourhood. He completed his secondary education at CMS Grammar School in 1973.

Upon completing National Youth Service in 1980 at the Federal Ministry of Health, Ashafa commenced a career in Public Service as an Administrative Officer at the Lagos State Unified Local Government Service Commission. He rose to the rank of Area Officer in charge of the departmental Tenders Board and the Finance and General Purpose Committee.

By 1990, Ashafa had completed nine years of public service and decided to challenge himself by taking on some private sector ventures. He left the public sector for French-Calahan Ventures Limited, which held majority shares in a state-controlled cocoa processing plant. He worked as Purchasing Manager at the processing plant for six years until 1996. In 1996, Ashafa founded a company called Beverage Specialties Limited, manufacturers of Choco-Vita (a liquid vitality drink) and Cocoa-Vita (a powdered vitality drink). He sold the business in 1998 and began another phase of his career.

Between 1998 and 2009, Ashafa once again found himself plunged into Public Service. Under the able leadership of Asiwaju Bola Ahmed Tinubu, Ashafa served as a co-opted member of the Governor-Elect’s transition team, where he provided the blueprint for the local government reforms of the Tinubu administration.

He went on to serve in the following capacities in the 4th republic under Asiwaju Bola Ahmed Tinubu:

i.Director of Planning, Governor’s Office in charge of local government administration. 1999 to 2001

ii.Executive Secretary, Lagos State Land Use and Allocation Committee. 2001 to 2005

iii.Ashafa was appointed Permanent Secretary, Lagos State Lands Bureau in February 2005. He led his team to execute the computerisation of documents in the State Land Registry, the creation of the Land Regularisation Directorate and the implementation of the 30-day Governor’s consent policy on land transactions. He held the position up till December, 2010 when  Ashafa aspired for a higher calling in the Public Service.

COMMITTEE WORK:
Since his appointment as the chairman of the Senate Committee on Land Transport, Senator Ashafa has quickly set the pace for the provision of legislative support to the executive in achieving the complete turnaround of the Railway Sector in Nigeria.
Ashafa’s palpable passion for the rail sector can be seen through the manner in which the Senator has continued to defend the appropriations sought by the executive for capital intense rail infrastructure projects across the country. For examples The Lagos to Kano (Standard Gauge) Nigerian Railway Modernisation Project and the Calabar to Lagos Standard Gauge Coastal Rail Project.
Senator Ashafa is a Lagos big boy who grew up on Lagos Island with his maternal grandmother.
. His father died when he was seven years old. As a result, his mother and his aunt, Alhaja Rafat Elemoro, raised him. His mother was popularly known as ‘Mama Bareehu’ of Gutter Ariyo Kosoko market, Idumota, Lagos.

Why I Don’t Joke With My Wife, SADE LAGOS Senator, GBENGA ASHAFA was last modified: June 4th, 2017 by Reporter

They say women with big butts are smarter and healthier [READ]