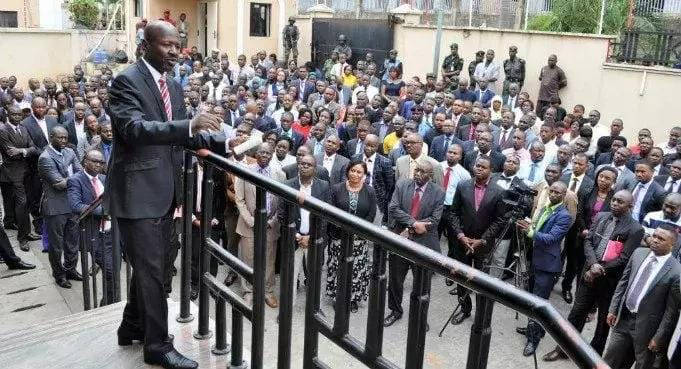 The Economic and Financial Crimes Commission has issued a final warning to a former gubernatorial aspirant in Niger State.

Acting Chairman of the Economic and Financial Crimes Commission, Ibrahim Magu, during an interactive session with staff of the Commission to mark its 14th year anniversary.

The EFCC is asking him to make himself available for interrogation over the discovery of N6 billion traceable to him or risk being declared wanted.

The politician, Kantigi Liman, who was the Commissioner for Local Government in Niger State, made a bid to become the governor of the state in 2015 on the platform of the People’s Democratic Party but crashed out at the primary level.

The EFCC said on Friday that it had traced additional N2 billion to Liman and companies linked to him and would require to interrogate him urgently to determine how the money came into his accounts.

According to the agency, the new cash was discovered in his account with a bank by its investigators.

A source in the agency said, “The discovery brings to N6 billion traced to accounts held by the politician and companies linked to him.

“The Commission had some weeks earlier traced N 4 billion to two accounts in another bank, both linked to Liman.

“The first account belongs to Sadiq Air Travel Agency Limited and the second to Kantigi.

Sources at the Commission however are of the view that the politician who was a governorship aspirant of the Peoples Democratic Party in the 2015 election, is dodging the operatives and must be fished out to face interrogation.

“He is on the run and all efforts to track him down have been futile. The next option left for the Commission is to declare him wanted,” one of the sources said.

The source further disclosed that investigations so far pointed to the the direction that the funds were siphoned from the Niger State Local Government Joint Account and that the anti-graft agency was ready to confront the suspect with evidence.

The politician is believed to be to be raking in a monthly interest of over N33 million on the fixed deposits.