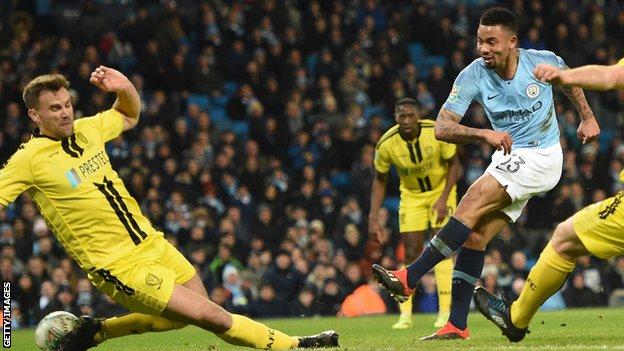 A superb Manchester City side scored nine goals as they thrashed Burton Albion with an incredible display of attacking football in the first leg of their Carabao Cup semi-final at Etihad Stadium.

Headers from De Bruyne and Jesus made it 2-0, the Brazilian tapped in a third and Zinchenko’s curler put City four up.

This was the first time in more than 31 years that City had scored more than eight goals in a single match – they beat Huddersfield Town 10-1 in a second-tier league encounter in November 1987.

It means City have scored 16 goals in four days after thrashing Rotherham United 7-0 in the third round of the FA Cup on Sunday.

The second leg, merely a formality, takes place at the Pirelli Stadium on Wednesday, 23 January, with the final at Wembley Stadium on Sunday, 24 February.

City, the Carabao Cup holders, are set to meet either Tottenham or Chelsea in the final, with Spurs leading 1-0 after Harry Kane’s penalty gave them a first-leg victory at Wembley on Tuesday.

Before the game, Guardiola called the tournament “a more local competition” and said “everybody is happy to win but no-one is sad to go out”.

However, the Spaniard still named a strong team that included De Bruyne, Silva, Mahrez, Sane and Jesus, with starts for 20-year-old goalkeeper Aro Muric and Spanish centre-half Eric Garcia, on his 18th birthday.

It only took them five minutes to break through with De Bruyne’s header, and Sane almost added a second but fired into the side netting.

But three goals in a seven-minute spell in the first half took the tie away from Nigel Clough’s side.

Jesus got his first with a header after Sane’s effort had been parried by goalkeeper Brad Collins, and the Brazilian tapped in from Sane’s cross to make it 3-0, with the goal given after a video assistant referee check to see if he had been onside, which he was.

Zinchenko got his first City goal when he looped the ball over Collins from the edge of the penalty area, with Mahrez denied a fifth when the Burton goalkeeper tipped over his effort.

City did not let up after the break as Jesus completed his hat-trick when he headed in from Silva’s cross, and the sixth goal was scored by Foden, following up after Collins had denied Jesus.

But the Brazilian grabbed his fourth of the game three minutes later, with a tap-in from Sane’s low delivery.

Walker made it 8-0 with a side-footed finish and Silva hit the outside of the post, although the ninth was not far away as Mahrez bundled in another goal.

City had a chance to get a 10th but Zinchenko’s header was saved on the line by Collins.

City have won this competition in three of the past five years and their 2018 success was Guardiola’s first trophy in English football. With City playing eight matches in a hectic January, Guardiola will now have the luxury of resting some players for the second leg.

Burton – ninth in League One, 51 places below City – were playing in their first major cup semi-final, and around 3,000 of their supporters had tickets for the match at Etihad Stadium.

However, numerous traffic incidents caused tailbacks on the M6 with only one of their 31 fan coaches at the ground an hour before kick-off.

Some of their fans had still not taken their seats when De Bruyne’s header put the hosts in front, but the away fans should have been celebrating an equaliser seven minutes later, although Marcus Harness could only shoot over when unmarked 12 yards from goal.

After that miss, Burton were outclassed by a ruthless City side. Clough’s side still created chances, though, and Scott Fraser had an effort saved by Muric and shot just over early in the second half as the Brewers fans were denied the goal they wanted.

Burton had beaten five teams to reach this stage – including Premier League Burnley and Championship sides Aston Villa, Nottingham Forest and Middlesbrough – but were powerless to stop a rampant City outfit.