Home News Ekiti APC congress: Why I allowed use of stadium for primaries, Fayose reveals
News

Ekiti APC congress: Why I allowed use of stadium for primaries, Fayose reveals 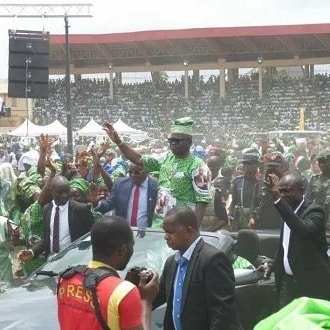 Governor of Ekiti State, Ayodele Fayose, has explained why he allowed the All Progressives Congress (APC), to use the Oluyemi Kayode Stadium for their party primaries on Saturday.

In a tweet posted via his verified handle, Fayose said it was “in the spirit of political tolerance and democratic governance”.

He wrote: “In the spirit of political tolerance and democratic governance, I have directed the release of the Oluyemi Kayode Stadium for use as the venue of the APC governorship primary election tomorrow.

“How I wish APC governors can also do this in their States.”

A total of 33 aspirants out of the 37 that initially received letters of intent, are jostling for APC ticket.

Ekiti APC congress: Why I allowed use of stadium for primaries, Fayose reveals was last modified: May 5th, 2018 by Reporter