Home News El-Rufai Gets Free Nomination Form, Says He Doesn’t Have N20Million In His Account
News 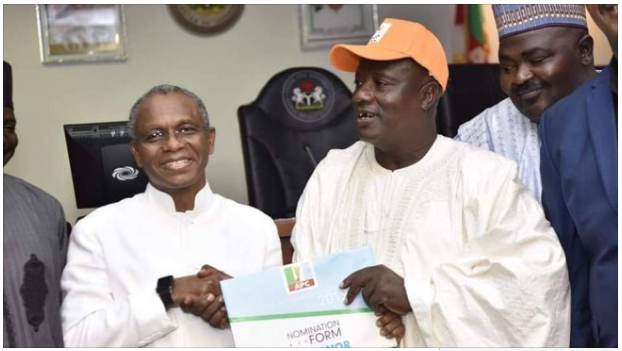 Some groups in Kaduna state have purchased expression of interest and nomination forms of the All Progressives Congress (APC) for Nasir el-Rufai, governor of Kaduna.

While receiving the forms at government house, Kaduna on Monday, the governor said he does not have up to N20 million in his account.

The governor commended them for the initiative, describing it as a pleasant surprise.

“When the party fixed the money for the form, I could remember that during the meeting, the President was the first person to raise his hands and said he does not have N50m,” he said.

”In fact, we the governors started discussing on how we will raise the money for Mr. President.

“We said each governor will contribute N2 million each and we travelled to China and it was in China I told the president that some group has purchased the form for you. So who will buy my own for me?

“I don’t have N20 million also to buy my form. The money I have in the bank is not close to that amount. I have only one account in GT. Except I sell my house will I be able to raise that amount.”

Earlier, Abbas Likoro, spokesman of the groups, said they decided to purchase the form for the governor to demonstrate their support for his good work.

“We are here a loud voice to give our support, contributions and our zeal to follow your cause. We have mobilised all our members in Kaduna state to make sure you are re-elected in 2019,” he said.

“We have seen your contributions to the development of Kaduna state, we admire your visionary leadership. Your cause is our cause, your struggle is our struggle, your worry is our worry. Kaduna state needs you, the country needs your ideas. We also need your energy and your passion for the state. We are going to support you.”

El-Rufai Gets Free Nomination Form, Says He Doesn’t Have N20Million In His Account was last modified: September 11th, 2018 by Damilare Salami