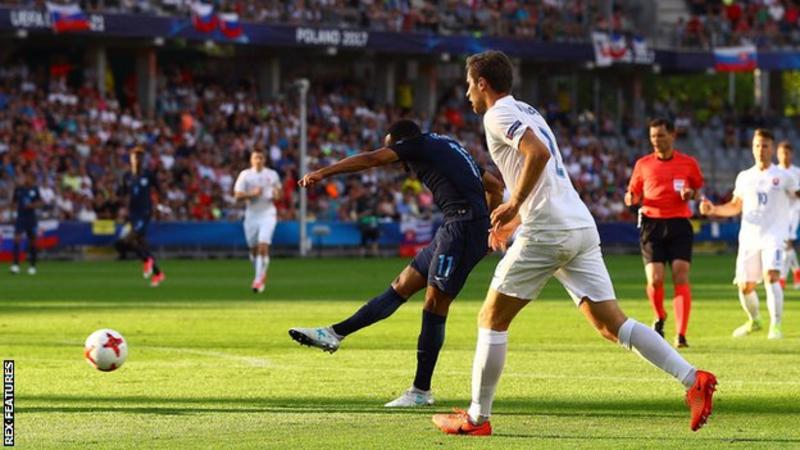 England are in contention to reach European Under-21 Championship semi-finals after coming from behind to beat Slovakia.

Aidy Boothroyd’s side, who drew with Sweden in their Group A opener, struggled in the first half as Martin Chrien headed in the opener.

However, Alfie Mawson scrambled in an equaliser before a powerful Nathan Redmond strike gave England victory.

The Three Lions move top of Group A on four points.

They play hosts Poland in their final group game on Thursday where a win could see them into the last four.

Only the winners of each of the three groups go through to the semi-finals, along with the best runner-up.

England reached the European Under-21 Championship final in 2009 but their record since has been hugely disappointing.

They failed to get of the group stage in 2011 and 2013 and looked in real danger of another early exit after a drab first 45 minutes against Slovakia.

After managing just one shot on target all game against Sweden, England again looked lightweight in attack. They were ponderous in possession and lacked invention.

But a half-time alteration brought with it a change of fortunes.

Norwich forward Jacob Murphy replaced Mason Holgate and within five minutes he produced the cross that led to Mawson’s equaliser.

The goal resulted in Slovakia – looking for a win that would move them onto six points and in command of the group – abandoning their cautious approach in search of a winner and that played into England’s hands.

A failed Slovakia attack led to England breaking three against two, and Redmond did well to cut inside his marker before driving an effort into the far corner with the help of a deflection.