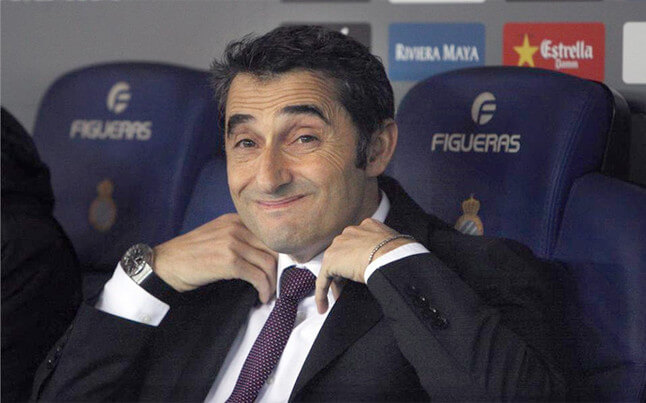 New Barcelona coach Ernesto Valverde believes more is to come from Lionel Messi as he spoke of his excitement at working closely with the Argentine, whom he called the best player he has ever seen.
Messi finished top scorer in Europe’s top five leagues last season with 37 strikes in La Liga and produced a vintage performance as he helped fire Barca to a 3-1 victory over Alaves in the King’s Cup final last Saturday.
Outgoing coach Luis Enrique spoke of his gratitude after that game of being able to enjoy Messi at the peak of his powers and Valverde also heaped praise on the five-times world player of the year in his official unveiling as Barca coach.
“I still haven’t met him but I feel very lucky and it will be a unique experience, he’s the best player I’ve ever seen on a football pitch,” Valverde told a news conference on Thursday.
“Whenever it looks like he has reached his peak the next day he surprises you even more. I hope I can help him in any way possible and that I’ll enjoy the experience.”
Valverde, who is nicknamed “the ant” and is a respected photographer in his spare time, joins Barca after six seasons in charge of Athletic Bilbao, where he was the longest-serving manager. He has also coached Barca’s city rivals Espanyol in addition to Olympiakos Piraeus, Valencia and Villarreal.
He said he had not yet devised a plan on how to get the best out of Messi, who assumed a deeper role on the pitch in the last campaign, often dipping into midfield, yet still hit 54 goals in all competitions.
“He’s decisive in whichever position he plays, although seeing him from the inside will be different from the outside. I’ve never trained a player of his quality. He will set the tone of our play, in a positive way,” added Valverde, 53.
Messi’s contract with Barca expires next year, although Valverde said he had been told the club’s directors were confident the Argentine will agree to a new bumper, long-term deal in the coming months.
“I’m not worried about it, the information I have is that everyone is optimistic about it,” he said.

Ernesto Valverde Counts Himself Lucky To Have Messi In His Barcelona Squad was last modified: June 1st, 2017 by Damilare Salami

Men Get Erections At Sexy Thoughts, What Happens To Women In Same Situation? Find out