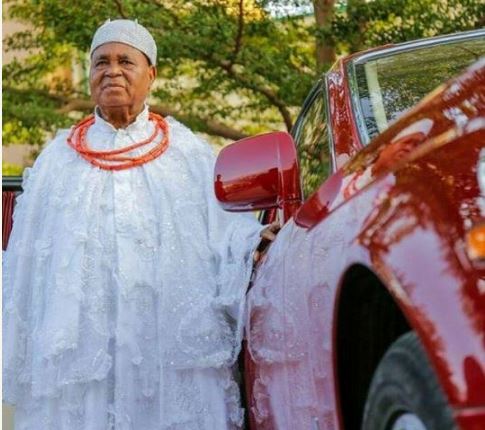 The rare luxury car of the super-rich Esama of Benin has found its way on social media after being shared by his lawmaker daughter, Omosede Igbinedion.

Gabriel Osawaru Igbinedion, who is the Esama of the Benin Kingdom in Nigeria, has struck a royal pose beside his pricey vehicle, and it has got tongues wagging on social media.
There have been a lengthy debate about the name of the brand of car thereby making it difficult for a definite name to be put on it. The Esama of Benin is a very wealthy traditional ruler with a massive business empire that has continued to flourish over decades.
The title Esama traditionally means the “Son of the people”, with responsibilities including assisting the poor in medial, monetary and private venture forms. He was suspended from participating in palace activities in 2008.
The Esama of Benin’s business empire includes an international property portfolio and a private TV and radio station. He owns a private bank, oil refinery, diamond, gold, marble mines over Africa, a private university (Igbinedion University, the first private university in Nigeria) and a large number of hotels.
He previously owned the now-defunct private airline, Okada Air, of over 40 aircraft (planes and helicopters). He has built numerous churches including a Grand Catholic Cathedral, and has set up and owns a number of private hospitals across Nigeria.
Esama Of Benin, Gabriel Igbinedion Poses By His Luxury Car (Photos) was last modified: May 17th, 2017 by Arinze Ago