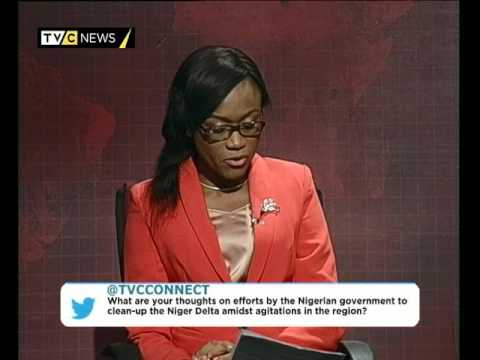 Esther Omopariola is one of the hottest newscasters at the Television Continental (TVC). Almost on a daily basis, you see her beautiful face on TV. She is a well-rounded journalist with a burning desire for more knowledge in the media profession. She is a graduate of Mass Communication from Madonna University.

She has worked in various news media and has played various roles in the industry….as a reporter, bulletin casting and programme producer, and a news anchor.

Her broadcast journey began at Biscon Communication, where she worked as a Voice over artiste for the “Bisi Olatilo Show”. She grew taller in the profession as a reporter, producer and news Presenter with Galaxy Television.

As an international news journalist with more than 10 years experience in the industry, her career has given her the opportunity to speak with notable personalities around the globe. Some of them include Nigerian Foreign affairs minister, Goeffery Onyeama. Kenya Foreign affairs minister, Amina Mohammed, Governor of Katsina State, Bello Masari , among other personalities.

Esther is also a presenter of a news and current affairs programme: “Africa Today”, which airs on TVC NEWS. She has received nominations as the best newscaster; the most recent was Nigeria Media Merit Award 2016. Her passion is to be a voice for the voiceless in the society, and make an impact on the young generation. She is also an eloquent instructor and a master in the art of presentation. She is married with children

How ESTHER OMOPARIOLA Hit It Big On TV was last modified: July 25th, 2017 by Reporter