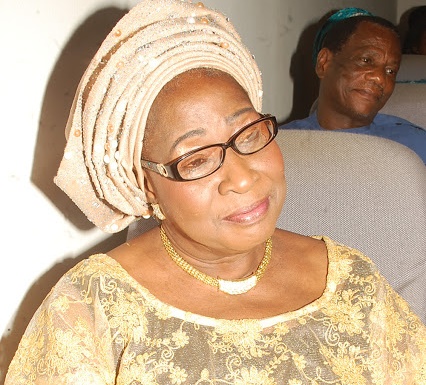 Chief Mrs. Bunmi Tola Adeniyi, one of Nigeria’s leading women of substance and wife of media guru, Chief Tola Adeniyi fondly referred to as Irumole, turned 70 in November 2019. And this beautiful woman recently was celebrated by family, and friends at CIAPS, Adekunle Fajuyi, Off Adeniyi Jones Lagos.

The birthday celebration was a small, but classy type, as the celebrant was treated to a memorable event by all her loved ones. The guests who were no more than 100 at the event were all dressed glamorously in honour of the great woman whose tribute inspired many as a humble, kind and loving wife, mother, and friend.

Her story and journey are an inspiration to many. At a time when women don’t get the front seat in the scheme of things in Nigeria, she fought against the odds to take up the responsibility in 1988 to become the first woman to head the Old Oyo state Ministry of Finance as Permanent Secretary and when Osun state was created in 1991 she was also appointed pioneer Director-General of the new Ministry of Budgets & Economic Planning. She was installed the first Yeyesorun of Ile-Ife, a very high-ranking traditional title of the Source. She was also installed the Yeyemeso of Ede kingdom. Speaker after speaker credited her with laying the foundation for Osun state’s Economic Planning.

And so it was, therefore, worthwhile on this remarkable occasion of her birthday, as guests from all walks of life, show gratitude for her noble contribution to civil service, turned out to celebrate the astute pillar of support and administrator. Yeyesorun who donned a glittering brown dress pleated with gold embroidery was visibly elated all through the evening.

Glamorous in their resplendent outfits, the guests were quite appreciative and cautious of the event plan trickling in at exactly 3pm the scheduled time to honour a trailblazer. The dignitaries were successful men and women from various sectors: banking to judiciary; politics, culture, arts, etc.

Overwhelmed with joy, Yeyesorun, as most people called her, was pretty much at hand to receive the personalities from far and wide as they glided through the red carpet on to her warm embrace. She was showered with praises, prayers, and testimonies. The host was described in glowing words as iconic, kind, loving, caring, unassuming, disciplinarian, trailblazer, courageous, visionary, achiever, role model, hardworking, dogged, titan, and mentor.

The Oonirisa, His Imperial Majesty, Enitan Ogunwusi who sent his royal greetings through a short video, maintained that Yeyesorun’s success story will be difficult to beat, considering her numerous landmark achievements as the first female DG in Osun state

The Irumole himself, Akogun Tola Adeniyi shares a congratulatory message to the celebrant that aptly captures the sentiments that flowed from the testimonies of her impact through her role as a mother, wife and support system through the trying time when he had to go on exile.

Poet Tunde Olowu also rendered a long, emotional tribute to Yeyesorun with a poem that described Chief Mrs as a rare gem and a builder of the home. The poem captures her biography, challenges, crossroads, and doggedness in the heat of social and political struggles.

There was music from the famous Ifelodun music group, as Chief Mrs. Adeniyi danced to the rhythm, and her loved ones joined her on the floor to make up the beautiful scenery. The merry would then trip over as classics of the past wafted through the speakers, momentarily reminiscing the host’s and her friend’s youthful days. Finger foods and exotic drinks complemented with local and intercontinental dishes were on offer.

And then a toast to the celebrant followed by picture sessions. Thrilled and overwhelmed, Chief Mrs. Olubunmi Adeniyi was left speechless when asked to say a few words to the gathering. In the end, it was a time well shared together celebrating a woman who has distinguished herself over the years in educating and inspiring Nigerian youth