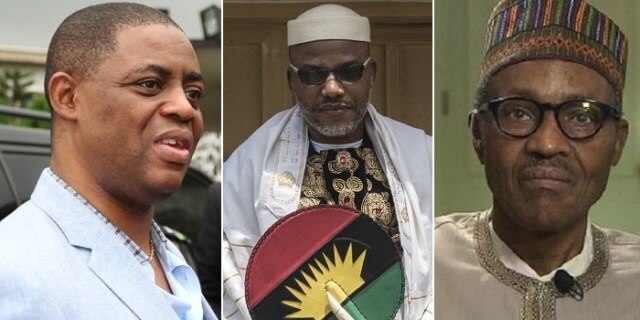 Read Femi Fani Kayode (FFK)’s latest article below to buttress controversial claim that President of the Federal Republic of Nigeria, Gen Muhammadu Buhari has been replaced with a doubleganger who now parades himself as the President.

1. Buhari went for surgery in January.

2. The story was that he didn’t quite make it and was brain-dead.

3. Aisha came back crying in April.

4. Aisha was later barred by Mamman Daura and Abba Kyari from seeing Buhari.

8. The Buhari wasn’t holding meetings or seen in public.

9. The Buhari became more vicious (even beyond his own evil threshold).

10. Ango Abdulahi had earlier alleged he was a double Buhari.

11. FFK had a private interview alleging it was a double (buhari’s look-alike, Jubrin from Sudan) masquerading as president buhari.

12. AIT was threatened with calamity should the interview be aired.

13. The interview was docked and AIT paid.

14. Nnamdi Kanu alleged he was Jubrin, buhari’s look-alike from Sudan and not Buhari.

15. The Army was sent to attack Nnamdi Kanu and kidnap him.

16. The attack was most unwise and was too risky to the country, yet it happened (the cabal wants the story dead by whatever means).

19. The London surgeons are being questioned.

21. Buhari or Jubrin/Cabal are vulnerable and pull out of most global organizations.

24. The alleged double is somewhat shorter than the twin.

25. The alleged double has a different earlobe.

26. The alleged double has a hairline a distance away from the ears.

27. The alleged double is darker brown.

28. No one undergoing chemotherapy would have facial hair intact at the time.

29. The new Buhari sees without glasses.

30. The new one has a different nose; beaked like an Arab’s.

31. Zahra complains to the minister and not her father.

32. The Army is suddenly very powerful and extremely dumb!

FFK buttress claim of President Buhari’s replacement with doppleganger in 32 Reasons was last modified: October 3rd, 2017 by Arinze Ago