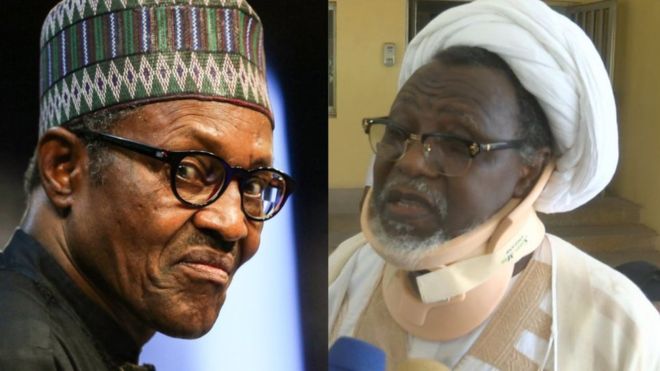 The federal government says the sole aim of Ibraheem El-Zakzaky, leader of the Islamic Movement in Nigeria (IMN), is to turn the country into an Islamic state.

The government said this in response to a motion filed by IMN challenging its proscription.

IMN was proscribed in July in the wake of protests by the group in the federal capital territory (FCT).

The IMN members had taken to the streets to demand the release of their leader. Clashes with security operatives led to deaths and destruction of properties.

In a 56-paragraphed counter-affidavit deposed by Enyinnaya Adiogu, deputy commissioner of police in charge of the operation, FCT, the government said IMN members do not recognise the authority of President Muhammadu Buhari.

“That from history and facts available, the Movement Called Islamic Movement of Nigeria founded by El-Zakzaky has its sole aim of creating an Islamic State,” the government said.

“That Sheik El-Zakzaky was heavily influenced by the Iranian revolution, which saw Ayatollah Khomeini take power in 1979 after the overthrow of the Shah in a popular uprising. Khomeini remains the Islamic Movement in Nigeria’s main inspiration.

“That members of IMN First pledge allegiance to Khomeini at their gatherings, and then to their local leader, Sheikh Zakzaky.

“The IMN views itself as a government, and Sheikh Zakzaky as the only legitimate source of authority in Nigeria and it does not recognise the authority of the Nigerian government, and views its leaders both Muslims and Christians as corrupt and ungodly.

“That the Islamic Movement in Nigeria began with a Shia Muslim university activist Ibraheem El-Zakzaky who became so impressed with the 1979 revolution in Iran that he wanted one at home (Nigeria).

“Later, El-Zakzaky went to Iran, ultimately becoming a Shia cleric. That at his return home, Ibraheem El-Zakzaky formed the Islamic Movement of Nigeria and turned it into a vehicle for proselytizing and gaining followers in 1990s.

“That till date, Sheikh El-Zakzaky enjoys the support of Iran in all the activities of the Islamic Movement in Nigeria, including the agenda to make Nigeria an Islamic State.

“That as a result of El-zakzaky Movement’s activities, many Muslim youths have converted to Shia-Islam of the Islamic Movement in Nigeria.”

While urging the court to dismiss IMN’s motion, the government noted: “that proscription process does not require the filing of the ex parte motion alongside motion of notice.”

READ ALSO: WHY THE NORTH STILL WANTS TO RULE AFTER BUHARI

FG Says It’s Against El-Zakzaky Because He Wants To Islamise Nigeria was last modified: August 29th, 2019 by Damilare Salami