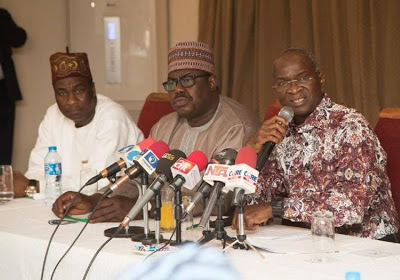 The Minister of Power, Works and Housing, Babatunde Fashola, on Saturday signed a N4.34 Billion Memorandum of Understanding with Dangote Group and other stakeholders for the reconstruction of Apapa Wharf Road.

The project is to be funded by AG Dangote Construction Company Limited, an arm of the Dangote Group; Nigerian Ports Authority; and Flour Mills of Nigeria.

The News Agency of Nigeria reports that the site was handed over to the stakeholders for commencement of reconstruction works after the agreement was signed in Lagos.

Fashola explained that the gridlock in Apapa became compounded and had reached an unbearable level as transporters ignored the old system of moving cargo through rail to trucks and containers.

He said that the choice of the transporters to use road instead of rail for haulage increased gridlock, caused degeneration as well as well as hardship to residents of Apapa.

The minister commended the “leadership role’’ of the stakeholders to solve the complex problems in Apapa and its environs.

According to him, the situation has caused stress to residents, business owners and other stakeholders in the state.

Fashola said: “As a result of all these unsavory practices, we have reached a point of near total gridlock, it is difficult to move cargo in or out, difficult for residents to get home and this must stop.”

Fashola said that it took time to reach an agreement on the project because the stakeholders were putting up an effective design that would address the drainage problem because the area was water logged.

He said: “We have finished with the design, we now have a Bill of Quantity and the cost of the road is N4.34 billion to be funded and paid for by these three groups: Flour Mills of Nigeria, AG Dangote Construction Company Ltd and NPA.”

The minister said that although the parties were funding the project, the Federal Ministry of Power Works and Housing would supervise it through all the stages to ensure quality and compliance with standards.

Fashola sought for the cooperation of all residents of Lagos and directed the Apapa Area Commander of the Nigerian Police Force, My Nuru, to apprehend reckless drivers who drive against traffic during the period of construction.

He also appealed to Nuru to tackle all bureaucracies that would affect free flow of traffic while apprehending offenders.

Fashola also appealed for synergy among law enforcement and traffic regulatory agencies for better traffic management to reduce stress on road users during the one-year duration of the project.

The Managing Director, Flour Mills of Nigeria, Paul Gbededo, said that Wharf Road was the “most important road in the entire country’’ which needed more attention.

Gbededo said: “This kind of road cannot be handled with levity.”

Responding to issues of lack of holding bays raised by transport unions, the Managing Director of NPA, Hadiza Usman said that government would support the private sector to drive the initiative to set up new ones.

Usman said: “We have received proposals on electronic management of holding bays, we are working through processes and we would soon conclude on that.”

She said that tank farms that do not have holding bays for their trucks would soon be sanctioned.

Usman said that the NPA was also working on providing weigh bridges within the ports as well as enforce implementation in a few months to take care of problem of high axle load on the roads.

Joseph Makonjuola, the Honorary Adviser to Dangote Group of Companies, assured that the company would contribute its funding as part of its corporate Social responsibility and would still meet its tax obligations to government.

In his remarks, the Managing Director of AG Dangote Construction Company Ltd, Ashif Juma, while giving a brief of the two-kilometer road project said that rigid pavement would be used on the road.

He also assured that high quality materials that would withstand stress would be used.

Representatives of truck owners, transport unions, maritime operators and business owners in Apapa were among stakeholders present at the ceremony