Home Entertainment ‘You are filled with hate and envy, that’s why I named you 2face’, Blackface rants on IG
Entertainment 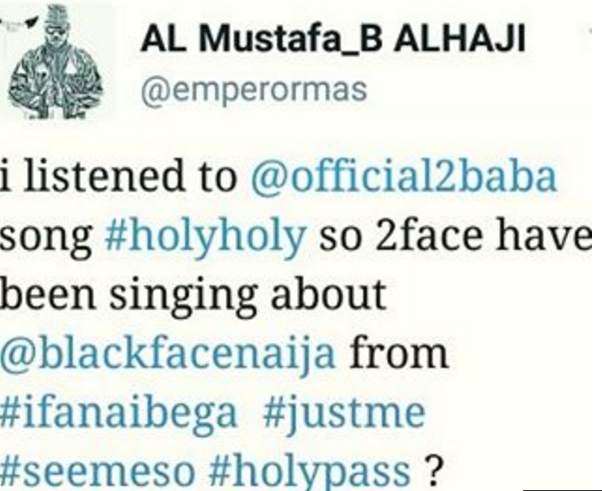 It’s obvious that the fight between Blackface and 2face might not be over in a long time. The aggrieved member of Plantashun Boiz has taken to Intagram to dig up the old rift between him and former group mate.
The Ahead of The Game crooner called out Tuface, accused him of a number of things, and said that Tuface would never have had a big hit had he not used songs written by him. He went further that he gave him 2face because of his character.

The call out started after @emperormas tweeted that Tuface has been singing about Blackface in all his songs. Blackface obviously agreed with this because he shared a screenshot on his page and in the caption he called Tuface names and accused him of sabotage.

See what he wrote below.

‘You are filled with hate and envy, that’s why I named you 2face’, Blackface rants on IG was last modified: April 13th, 2017 by Reporter