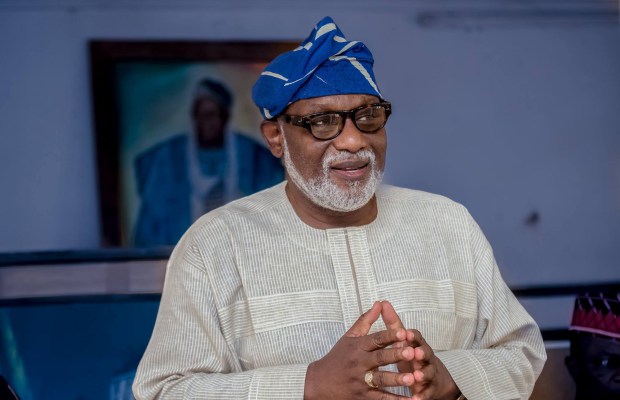 I am pleased to write to you today, the first day of the Year 2017. Do accept my best wishes and prayers for a wonderful and fulfilling new year.

By February 24th you would be inaugurated as the 6th civilian Governor of our Sunshine State. It has pleased God to give you victory as the winner of the Ondo State November 26th Governorship election despite the circumstances and drama surrounding your emergence as your party’s candidate and the unusual position and procedure adopted against the interest of the Peoples Democratic Party’s Candidate, Mr. Eyitayo Jegede, SAN.

Importantly, your emergence at that party primary, no doubt, has once again underscored the true nature of the people of our dear State, showing our doggedness, resilience and resistance to outsiders ruling or determining who will rule us as a state. I urge you to build strong bridges across all stakeholders’ divide and settle in quickly for the work ahead. The best time to forge unity is now while the election debate is still in the theatre of political discourse. As you may have realised by now, the realities of governance differ from the assumptions of campaign promises and the task ahead requires objectivity. Of particular interest to me is your recent comment wherein you agreed to the fact that the Governor, Dr. Olusegun Mimiko, really worked in the state.

The challenge therefore is for you to not see your tenure as a competition but rather that of further deepening the road map set by the outgoing Governor during his 8 years in office. Mr Governor-Elect, Sir, we cannot but give kudos to the tenure of Dr. Olusegun Mimiko for setting us as a state on a new path worthy of being built on. It is on record that during his tenure he initiated many people-oriented projects and at the same time ensured their completion.

The Abiye Project, otherwise called Mother-and-Child, is one of the good initiatives which has no doubt reduced mother and child mortality rate in the State which is in tandem with one of the Millennium Development Goals. Our mothers and children have by this scheme been given assurances of good health and life. The project renders free medical and consultation services to pregnant women during ante- and post-natal stages of pregnancy. This and more are assured once such mothers register and get captured in the centre ‘s database.

Dr. Olusegun Mimiko’s commitment to the development of education is unmatched. He introduced the Model and Mega School project across the three Senatorial Districts to capture local Governments based on the population of said areas with modern teaching aides. The concept of a Model and Mega school is to make education affordable for all without compromising on the standard.

Qualified teachers and instructors were engaged, further trained and charged to deliver on the task before them, and they delivered as evidenced by the repositioning of our state from the 23rd performing state to the 7th by WAEC.

This is a great transformation and the people will forever be grateful to Dr. Olusegun Mimiko.

Another of the legacies of the incumbent Governor for which he would be further remembered, is the construction of modern market structures for our mothers. The old rickety, unsanitary and unsafe structures were demolished to pave way for modern markets having modern facilities at affordable rates across the eighteen local government areas of the state.

This project has dignified the businesses of our mothers and the entire market people, no doubt.

Another of his initiatives is noticeably in the area of youth empowerment and wealth creation, superb and far above what we have in other states of the federation. Based on the high level of unemployment and the need to reduce juvenile delinquency, a by-product of idleness and hopelessness, Governor Olusegun Mimiko set up Agricultural Villages across zones of the state to engage and train those that may be interested. Upon completion of their training, the trainees would become entrepreneurs with the government-assisted access to and grant of credit facilities.

This he achieved through the instrumentality of the Wealth Creation Agency, another of his brainchild, which agency is also saddled with the responsibility of creating market chains for the products/produce of these budding farming entrepreneurs. He had to ensure this to show his commitment to the continuous success of the project.

To determine the rate at which the people of the state benefit from the aforementioned projects, he introduced a card “Agbe Ayo” which serves as a form of residence permit and proved an easy means of benefiting from government initiatives. It further helps provide a reliable record of the population of people resident within the state to help the government in physical development plans and the monitoring of potential internal revenues within the state.Without a doubt, this initiative, taken to its logical end, would enhance the possibility of creating a system that is capable of providing governance on auto-pilot, thereby reducing the stress of the chief executive regardless of his own personal capability.

As the former Board Chairman of Ondo State Radio Corporation, in which capacity I was opportuned to serve under Dr. Mimiko, I am a first hand witness of the outgoing governor ‘s resolve and effort. It should be noted that at the inception of my tenure as Chairman of the Board of the Ondo State Radio Corporation the entire place was a shadow of its former self, the OSRC I grew up watching while a student at the Aquinas College, Akure. In our dream of reviving the broadcasting house several initiatives were introduced.

A probe panel was set up by me under the chairmanship of Mr. Ajose Kudehinbu who was the former Head of Service, to do a review of the existing anomalies and tender a comprehensive report replete with recommendations on the way forward.

The assignment was dutifully and thoroughly carried out and a final report was submitted.

It will interest you to know that none of the recommendations were tampered with by the Board and presented to the government but are in themselves yet to be implemented.I therefore urge you to employ the goodwill of your office to look into this and ensure that those recommendations are fully implemented to restore the lost glory of the OSRC.Posterity will be kind to you as you do this. The common man in Ondo State still looks forward to watching the OSRC after a hard day’s work.

While I have emphatically highlighted the incumbent governor’s achievements to the aforementioned, it is public knowledge that he intervened in other key areas such as attending to the welfare of workers long neglected by past administrations.

Ondo State was one of the first to not only implement the then new minimum wage scale, the state even increased hers to N22,000, a whooping N4,000 difference above the recommended N18,000!

This was sustained until the tempest of dwindling revenue allocation from the center which affected all states in the federation rendered it’s continuity impracticable. Further, road networks were improved upon, urban renewal was also done and the state enjoyed unprecedented peace which is capable of attracting investors into the state.

Personally, I believe more still needs to be done in all these areas as no one governor can cover the entire state even in eight years. I therefore use this medium to passionately charge you to continue on these legacies to ensure even development in the state and enforce your image as a Governor for all and not any particular section.

Mr Governor-Elect, kindly note that the results of the last poll have demonstrated that our people have confidence in you. They have unwaveringly given you their mandate and I therefore appeal to you to use this opportunity to serve them diligently thereby justifying their faith so trustingly reposed in you.

To whom much is given, much is expected. There is a great expectation from the people and you must not let them down. It is therefore imperative that you engage best hands to work with you as you take over office.

Sir, as you prepare to move into the great Alagbaka House, you must not forget that what is expected of you is service, and service to the people only. The only godfather you can have should be the good people of the state. I can assure you that once you keep faith with them, our people will always be there for you.

Finally, Mr Governor-Elect, the battle has been fought and won. The time is now to take firm steps to win the peace. You must consider it imperative to reach out to all those that might have been hurt by your actions and/or inactions since your intention to rule our dear state has been declared.

Without a doubt, even those perceived as your foes played a pivotal role in this great odyssey of yours. It would be heartwarming if one could see all those peers of yours like Segun Abraham, Prof Ajayi Boroffice, Barr Olusola Oke etc (against whom you contested) at your inauguration.

It is of great importance that that you reach out to those national and sectional leaders like Sen Bola Tinubu, Baba Akande, Gov Aregbesola etc because I am of the firm view that you stand to gain from their experience and bonhomie. They are not likely to come to your inauguration as your godfathers but as your partners in pursuit of progress and the unity of the Yoruba race.

Permit me, once again, to say congratulations and to wish you the very best as you take over the mantle of the leadership of the Great People of Ondo State.