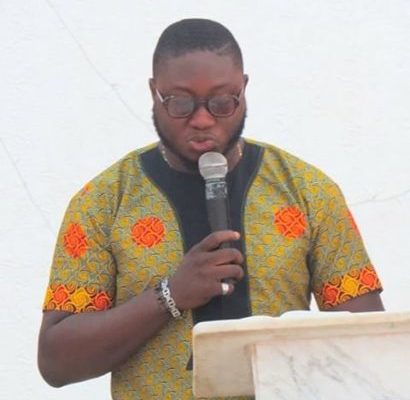 It was a pitiable scene last week Tuesday, 2nd January, 2018, as people wept uncontrollably, at Sango Cemetery, Ibadan, when Fresh F.M’s popular OAP, Olufemi Oluwajobi’s remains was laid to rest. The deceased, according to reports, was run over by a drunk driver few metres away from the radio station, along Challenge Road, after a radio program called ‘Ale Erebe’, in the early hours of 1st day of January. The Juju/Gospel maestro and Fresh F.M boss, Yinka Ayefele, colleagues, family and many associates of the deceased were present at the burial.

We exclusively gathered that Olufemi Oluwajobi was on his way to ‘the Palms Mall’ on MKO Way (formerly Ring Road) where there was an ongoing crossover-night Gospel concert when the incident happened. His colleagues were said to have done everything possible to save his life, as he was rushed to a close by hospital ‘Iye’, from where they were referred to Adeoyo State Hospital. But unfortunately, Adeoyo, according to reports, didn’t also have the required facility ‘Oxygen’ to have admitted him and thereby referred them to U.C.H. Oluwajobi, however, didn’t make it it to University College Hospital, Ibadan, before he gave up the ghost.

While those involved believe Adeoyo could have saved the situation if it possessed the necessary equipments instead of their very poor healthcare service delivery. An inside source, within the hospital, who doesn’t want his name mentioned, has however countered the claim of negligence on the part of Adeoyo Hospital. That the patient, as at when he was brought in, was attended to accordingly. That admission card was even opened in his name.

Since this sad news broke last week however, the whole of Ibadan broadcast industry, family members, friends and associates of the late ‘Radio Dynamite’ as Olufemi Oluwajobi was popularly known in his lifetime, have been thrown into a deep mourning; in fact, Fresh F.M declared 7-day mourning in his honour.

Though the reality has clearly set in that Olufemi Oluwajobi (formerly Femi Eegunjobi) is dead and has since been buried but can his death be linked to Destiny? Was it coincident? Or does it have some sort of spiritual connection? Or did he have premonition of his death?  Those are the questions that have been on the lips of many since the unpalatable incident happened, judging from the past events according to some source. Femi was said to have been involved in two different accidents before this particular one that finally claimed his life. This is coupled with how he was said to have been prevailed upon not to go to the said concert, since the new year celebration had been set in motion among his colleagues right within the radio station’s premises.

Another shocking thing about Oluwafemi Oluwajobi’s death, is his powerful and highly touching memoir he penned down on his facebook page on August 23rd, 2017. Where he wrote “God, I offer myself to Thee – to build with me and to do with me as Thou wilt. Relieve me of the bondage of self, that I may better do Thy will. Take away my difficulties, that victory over them may bear witness to those I would help of Thy Power. Thy Love, and Thy Way of life. May I do Thy will always! This is my desire To honor You Lord with all my heart I worship You. All I have within me I give You praise All that I adore is in You Lord, I give You my heart I give You my soul I live for You alone Every breath that I take Every moment I’m awake Lord, have Your way in me.”

Meanwhile, it is not clear, as at the time of writing this story whether the driver of the vehicle that knocked down the deceased has been arrested. The management of Fresh F.M, last week Wednesday 3rd January, 2018, through its instagram page, disagreed with a purported statement credited to the Oyo Police PPRO, Mr. Kunle Ajisebutu in an online medium of a front-line newspaper in the country, concerning the issue where he was quoted to have said that, no arrest has been made concerning the death of Olufemi Oluwajobi who died from injuries sustained after being run over by a hit and run driver at Challenge area of Ibadan.

According to him, “We have impounded the car driven by the driver and it is parked in one of our police stations. The driver escaped from the scene of the accident, but we are searching for him.”

Fresh F.M Management said, “this claim by Ajisebutu is unacceptable and we condemn it entirely”

They stated further that, “the general public should be informed that the said driver, AHMED MURITALA was apprehended by the police the same day and has been in the custody of the police.

According to Fresh F.M’s statement, “Tuesday 2nd January 2018, Ahmed confessed to running Olufemi Oluwajobi over but fled the scene as he was destabilized because he had already lost control after hitting a pole few meters before the scene of the accident. Ahmed was arrested after causing another accident at Orita area of Ibadan with the same vehicle, a Honda Element with number plate ‘FST 04 ES’.” Olufemi Oluwajobi, in his lifetime, was a brilliant, respectful and highly promising newscaster/radio presenter with Fresh F.M radio, Ibadan. He had worked in several radio stations including BCOS, Star F.M and Space F.M before joining Fresh F.M. He is survived by aged parents, pregnant wife, son and siblings. May his soul rest in peace!