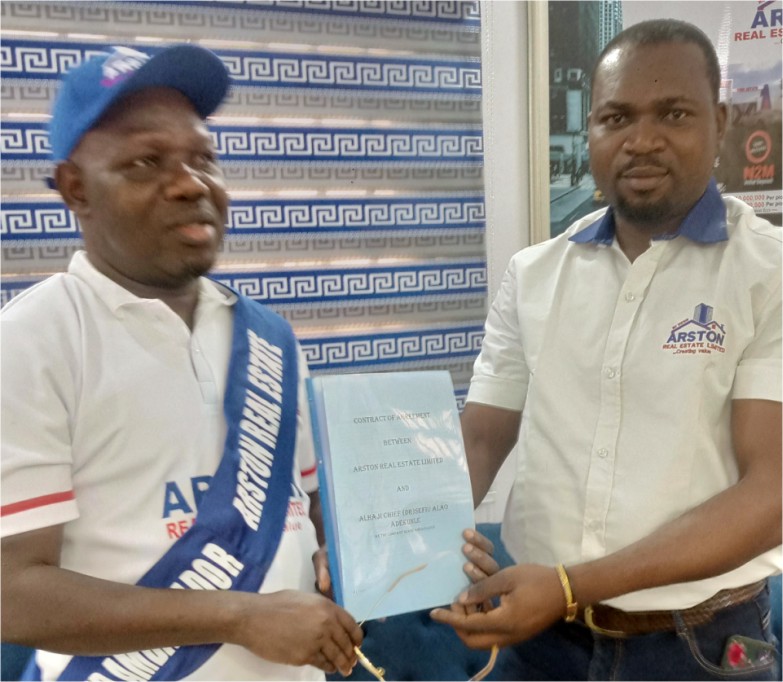 Abeokuta, Ogun State based Fuji music star, Alhaji (Dr.) Sefiu Alao Adekunle, Baba Oko, Agbara Orin, has been signed up by a top real estate company in Lagos State, Arston Real Estate Limited, as their Brand Ambassador. The ambassadorial deal which was said to be running into millions of naira was signed and sealed on Wednesday, 17th August 2022, at Arston Real Estate Limited’s Corporate Office located in Ajah, Lagos State.

Speaking on why Sefiu Alao was chosen as their Brand Ambassador during the unveiling of the Fuji star to the media before the ambassadorial deal was signed, the Managing Director (MD) of Arston Real Estate Limited, Sunday Okirika, said the personality and stardom of Sefiu Alao in the music in Nigeria was one of the factors considered in chosen him. “Alhaji Sefiu Alao is a talented Fuji music artiste that is well known in both Nigeria and the diaspora,” he asserted.

Speaking further, the MD said: “Our company which was set up in 2019 to reduce the housing deficit in Nigeria and to also contribute our quota to stimulating the Nigerian economy, saw the need to engage a Brand Ambassador who would be the face that would connect our potential customers out there with us, and we concluded that Alhaji Sefiu Alao is our best bet from the entertainment industry. And that’s why we contacted him before we finally came to an agreement on the deal.” He revealed.

In his own speech which he read articulately in English before the agreement was signed, Sefiu Alao described Arston Real Estate Limited as a real estate company people can trust to do business with. And that was because, according to him, he did his due diligence in investigating them by going to inspect the different locations where they have large hectares of land to sell, from Ibeju-Lekki to Epe, before agreeing to become their Brand Ambassador.

“Ladies and gentlemen, let me, however, add at this point that, Arston Real Estate Limited would not be the first real estate company that would approach me to be their Brand Ambassador. There have, indeed, been several others with different offers before them. But, when my team did our due diligence in investigating those before them, we discovered that what they have on the ground was not enough to put our own brand on, to promote.

“So, that is where Arston Real Estate Limited has shown the competitive edge above the others that came before them. Because, my team and I have been to their different sites from Ibeju-Lekki to Epe, we realized that they don’t only have more than enough hectares of land to sell to members of the public, but they have also procured the necessary titles and documents to sell their land with peace of mind for the customers.” Sefiu Alao assured in his speech.

Sefiu Alao concluded his speech by promising that since he had become the face of Arston Real Estate Limited, he would, henceforth, be promoting the company with his personality and music where ever he goes.

Why Many People Don’t Joke With Prophet TAIWO OJO

Why 3 Areas In LAGOS Have Become Real Estate Hot Spots

How I Became Alaga For GOLDBERG Brand