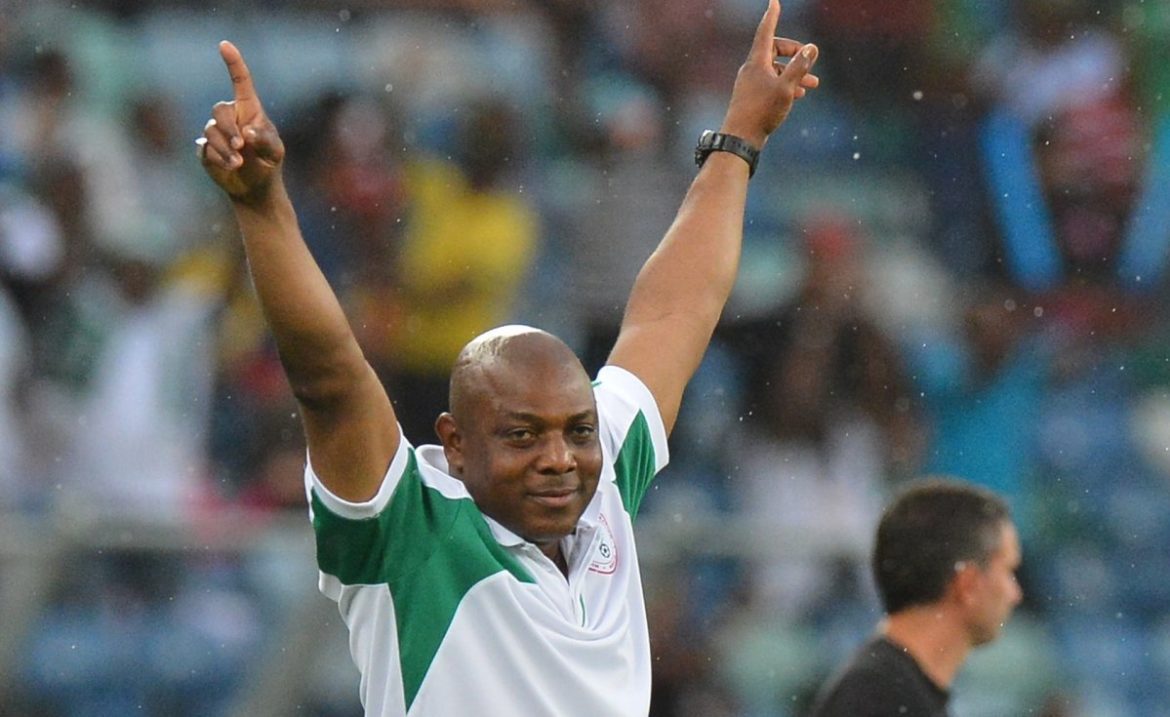 Super Eagles Coach, Gernot Rohr, led no fewer than 25 players in the team’’ camp in Asaba to the 2nd Stephen Keshi Memorial Lecture held in the Delta capital on Friday.

Keshi died in June, 2017 and the memorial lecture was instituted by the National Association of Nigeria Professional Footballers (NANPF).

The eagles are currently camping in Asaba ahead of the friendly match with the Warriors of Zimbabwe on Saturday at the Stephen Keshi Stadium in Asaba.

Rohr, at the side line of the event, lauded the qualities of late Keshi, and told newsmen that he (Keshi) made a mark in Nigerian football and abroad, as a player and a coach.

He expressed delight that the lecture held at a time when the Eagles were camping in Asaba ahead of the African Nations Cup tournament beginning on June 21 in Egypt, and for a friendly match with Zimbabwe in Asaba.

“I commend the association of professional footballers for keeping date with Keshi. Such association is necessary to seek the welfare of members after retirement from active play.

“It is important that I bring all the players here as mark of respect and honour to Keshi,’’ Rohr said.

The Chairman, Delta Sports Commission, Tonobok Okowa, said that the lecture was to expose the younger generation to the times and achievements of Keshi, which made the state government to name Asaba Township Stadium after him.

He said the lecture was a pointer to the fact that all players must prepare for life after football, adding that it may be challenging to those who failed to prepare for their future.

According to him, like Keshi, the footballers must be dedicated, be objective and have a clear vision of what legacies they will leave behind.

“Keshi started as a footballer, became the captain of the team, and later a coach of the Super Eagles, which he played for.’’

On his part, General Secretary of NANF, Austin Popo, said the occasion was to keep alive the legacies and memory of Keshi.

He said that the lecture was among the promises the new leadership made after their election in 2018 to reposition the players’ union to truly represent and promote players’ right and interest in Africa and the world.

“The annual Stephen Keshi memorial lecture and the youth football tournament is one of such programmes.

“We are already discussing plans on how both bodies can make the second edition of the Stephen Keshi U-17 and U-21 national football tournament a success, with Delta government providing support,’’ he said.

Meanwhile, the Zimbabwean team comprising 25 players and eight technical crew arrived at the Hampton Hotel, Asaba, on Friday at about 11.30 am for the Saturday encounter.

According to the Zimbabwean Coach, Sunday Chidzambwa, the team is here to play and learn from the more experienced Nigerian Super Eagles.

The theme of the memorial lecture is “Life after Football: What Does the Country Owe Our Ex-Internationals?”

READ ALSO: SENATE PRESIDENCY: SENATOR ALI NDUME NOT STEPPING DOWN FOR ANYONE