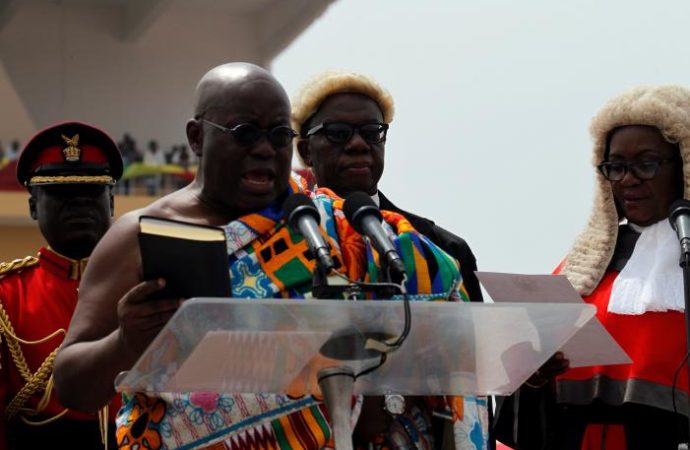 Ghana’s new President Nana Akufo-Addo pledged to cut taxes to boost the economy at his swearing in ceremony on Saturday, whilst also promising to protect the public purse by getting value for money on
services.

Akufo-Addo, 72, defeated incumbent John Dramani Mahama in peaceful elections a month ago, a rare peaceful transfer of power in a region plagued by political crises.

The major cocoa and gold exporter is half-way through a three-year aid programme with the International Monetary Fund to fix an economy dogged by high public debt and inflation.

It is not clear how the new president will cut taxes and still stick to an IMF austerity plan that was a condition of a 918 million dollars bailout.

“We will reduce taxes to recover the momentum of our economy,” said Akufo-Addo, wrapped in a traditional kaleidoscopic “kente” robe.

“Ghana is open for business again.”

At the venue for the inauguration in Black Star Square, thousands of Ghanaians also draped in traditional kente garments clapped. Outside the perimeters, revellers drummed and danced.

“I shall protect the public purse by insisting on value for money,” he said.

“Public service is just that: service, and is not to be seen as an opportunity for making money.”

Ghana expects growth will return to above eight per cent in 2017 as new oil and gas fields from Tullow and ENI come on tap.

Akufo-Addo served as foreign minister and attorney general in the NPP government that ruled between 2001 and 2009.

He twice previously lost close battles for the presidency. He is the son of a former chief justice and non-executive president of Ghana.

During his campaign, he had accused the Mahama administration of corruption and incompetence, charges the outgoing president
denied.

Ghanaians are proud of having a stable democracy and acutely aware that it is a rarity in turbulent region.