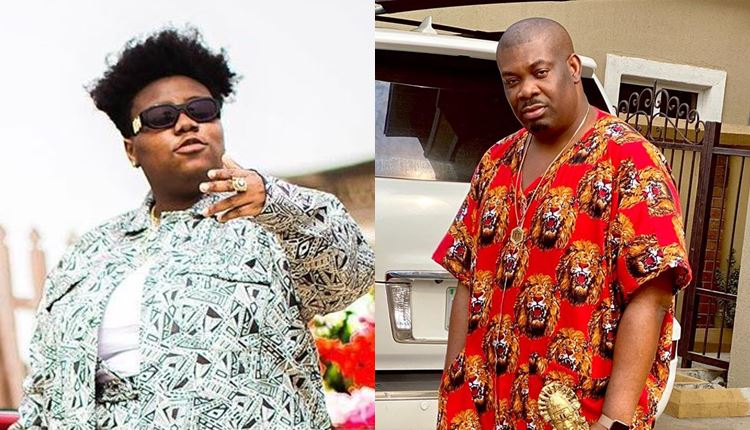 Leading telecommunications operator, Globacom has further propped up the Nigerian entertainment industry by unveiling Nigeria’s most popular music producer, Don Jazzy and rave of the moment in the Nigerian music scene, Teni as the latest brand ambassadors. This was announced today at the headquarters of the company located at Mike Adenuga Towers in Victoria Island. Lagos.

Since, it rolled out its network more than 17 years ago, the activities of the company has been a boon for the entertainment industry as it has consistently supported the players in various ways.

It was the company that rejuvenated musical concerts on campuses and cities across the country when night life was in a state comatose several years ago. Over the years, the company has also signed on scores of entertainers and eminent personalities as brand faces, not just in West Africa but globally.

This has endeared the company to celebrities and the masses as a network of choice. Every entertainer aspires at every point to become a Glo ambassador. Hence, the company has singlehandedly contributed a great deal to the development of the entertainment industry in the country.

Michael Collins Ajereh, otherwise known as Don Jazzy is undoubtedly the most popular music producer and one of the most talented entertainment promoters in the country today and has been for more than a decade.

A multiple award winner, he has produced some of the most consequential music performers in recent times. It was Don Jazzy who brought talented showbiz star, Dbanj to limelight about 16 years ago. As the president of Mo’hits Records he has also produced a lot of other big names in the industry including Wande Coal and Dr Sid.

He later founded Mavin Records and continued to produce chart-topping musicians. He is known as a world class expert in “cooking’ beats. And he even sings too.

Teniola Apata simpply known as Teni in the Nigerian music scene bust into the industry a couple of years ago and since then, she has been raving like a colossus with her brand of afro pop music. Her hit single, “Case” has been a national anthem in the country for two years. Another single “Uyo Meyo” has continued to enjoy air play not just in the country but worldwide as an inspiring folk song, even for those who do not understand the language.

Teni’s dominance of the music scene was cemented when she carted way four awards at the 2019 Headies Awards, as well as multiple nominations. She was heralded when she won the Rookie of the Year award at 2018 Headies Awards and she has not let back since then. Teni has continued to fill her fault with multiple awards.