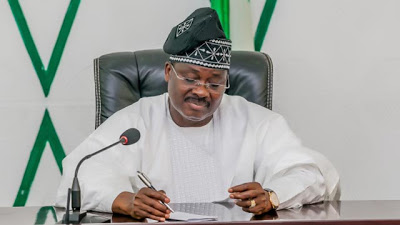 Releases Over 200 Electronic C Of Os

Governor Abiola Ajimobi of Oyo State has increased housing loans to civil servants by 100% so as to make housing affordable and easily accessible for workers in the state. Isaac Omodewu, the State Commissioner for Lands, Housing and Survey made this disclosure at a recently held ministerial briefing held in Ibadan.

In the briefing which was initiated by the State Government to acquaint the people with government’s activities, Omodewu revealed that, workers in the state at all levels, who access from N400, 000 to N1million as housing loan before will now be able to access from N800, 000 to N2million.

He urged interested workers to visit the ministry for the information regarding the housing loan, saying that workers who met the stipulated requirements could access the loan in a week.

The Commissioner also urged the people of the state to take advantage of the Certificate of Occupancy (C of O) issued by the government at N120, 000 within 60 days to perfect title documents on their properties. He affirmed that the N120, 000 C of O to be processed in 60 days will run for three months under the state government’s initiative tagged ‘Home Owner Charter Programme’. “The N120, 000 for the C of O includes Application Fee, Survey Plan, Building Plan, Tax Clearance, Administrative Fee, Registration and Stamp Duty”, he says.

Meanwhile, Mr. Omodewu through a press statement made available to the press by the Commissioner for Information, Culture and Tourism in the State, Mr. Toye Arulogun just last week reiterated that the state government has moved from analogue Certificates of Occupancy to electronic ones for efficiency and technological advancement while also disclosing that about 245 Electronic Certificates of Occupancy (C of O) are ready for collection at the State Ministry of Land, Housing and Survey.

He stated that the electronic C of O has security features and encrypted security code which is unique to the owner, adding that the picture of title holder would appear on it with the survey plan of the land printed at the back of the certificate in order to prevent fraudulent productions.Omodewu urged the members of the public to take advantage of the electronic of C of O to have proper title documents, noting that this protect land owners from land grabbers.

He explained that after the Bureau got a tip off about the circulation of fake receipts and Bank Tellers by these unscrupulous people, it delegated some officials to carry out investigations on the matter which eventually led to the arrest of one of the culprits.Gbadamosi explained that the government has therefore given a directive that all ad-hoc staff at various State Town Planning Offices to vacate the premises, stating that they will be arrested and handed over to the Law Enforcement Agents if they don’t.