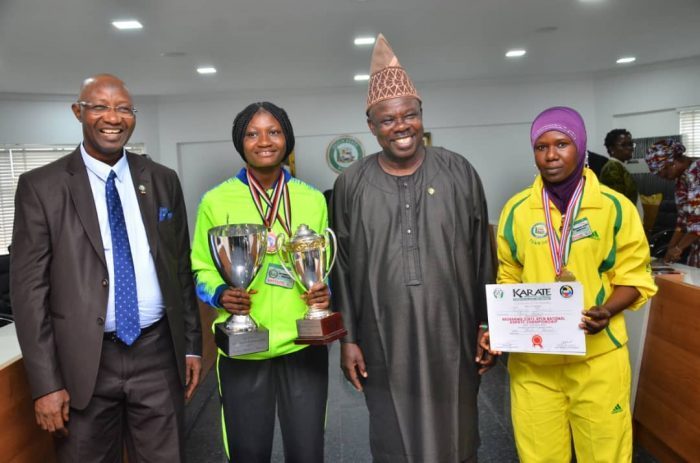 The Governor of Ogun State, Senator Ibikunle Amosun has approved the sum of over N10 million for the best African Badminton player, Dorcas Adesokan and the female national Karate champion, Miss Bolanle Dauda, for their outstanding performances and preparation for future competitions.

Amosun, who gave the approval at the Executive Council Meeting, Governor’s Office, Oke-Mosan, Abeokuta, said N5m was to be used for Adesokan’s preparation towards Tokyo 20-20 Olympic games, N3.6m for the purchase of Badminton and karate Mart and the sum of N1.5 million for Miss Dauda and other sports officials.

While noting that the development of sports was a task for all, he called on all stakeholders to rally round government in promoting sporting activities, saying, ‘’sports development could not be left in the hands of government alone’’.

Recounting his days as a Karate athlete, Amosun advised the athletes not to rest on their oars towards winning laurels for the State and Nigeria in general.

The Vice Chairman, Badminton Association of Nigeria, Ogun State Chapter, Mrs Adebayo Ikepo, said the provision of the Mart would go a long way in boosting the morale of the athletes and keeping them in shape for the upcoming Olympic Games.

She appreciated the Governor for the first tranche of the N5m and permanent employment for Dorcas Adesokan, stressing that the second tranche would be judiciously used for the trip to Tokyo.

On his part, the Director, State Sport Council, Mr. Adesola Faleti, said the gesture was coming at a time, when it was most needed, saying it would encourage other athletes to put in their best whenever they represented the State in any competition.

In their separate remarks, Adesokan and Dauda, appreciated the Governor for his magnanimity which she noted would further encourage them and other athletes across the State to be hardworking and committed to their chosen sporting career, pledging to do the State and country proud.

Gov Amosun Approves N10m For Badminton, Karate, Barely One-Week To Hand over was last modified: May 22nd, 2019 by Damilare Salami