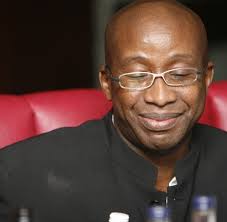 Just as many political watchers in Ogun State are looking in the direction of Ogun West senatorial district for a worthy successor to the incumbent governor, Senator Ibikunle Amosun, politicians in the Ijebu zone too are also warming up to make a bid for the No 1 slot in the state.

Already, the interest of two leading Ijebu sons are well known. The present Commissioner for Commerce and Industry, Otunba Bimbo Ashiru, has begun underground moves to run. So also is Senator Lekan Mustapha. But a new player has joined the race. He is Jimi Lawal, whose real name is Shakiru Olajimi Adebisi Lawal. He was in the 90’s, a popular whizkid banker, who set up and ran one of the hottest banks in that era called Alpha Merchant Bank. After the collapse of the bank, he was away on self exile for years until he came back when his best friend, Mallam Nasir el Rufai took over the running of BPE and eventually became the FCT Minister.

He became an Adviser to him in an unofficial capacity and when el-Rufai became the Kaduna State Governor, he was made the only non-Hausa Special Adviser to Gov. el-Rufai. He is from Ijebu-Ode in Ogun State, but Jimi Lawal was made a Special Adviser on Investment promotion to the Kaduna Governor, who has been his friend for close to 30 years.  Of course, when he was made SA, indigenes of Kaduna State who are politicians kicked against Lawal’s appointment because he became very powerful and influential in the scheme of things.

Petitions were even written wondering why Jimi Lawal who didn’t play any role during the APC’s formation and campaign had suddenly emerged the one calling the shots in the APC-controlled government of Kaduna. Many people in the corridors of power in Kaduna felt uncomfortable on how Jimi Lawal became the most powerful official and the closest to the governor and also the most feared.

The big news is that Jimi Lawal has begun serious consultations to strengthen his bid. We hear that he has the support of both the Kaduna and Ogun State governors. He has also received the blessing of President Muhammed Buhari. Not only that. He has also visited the Awujale of Ijebuland, Oba Sikiru Adetona.

Many don’t know Jimi Lawal too well because over the years, he had kept a low profile. But luck smiled on him sometime in 1999, when his close friend, Mallam Nasir El Rufai, was appointed Director-General of the Bureau for Public Enterprise (BPE) and made him a Technical Adviser in the agency. Later in 2003, following el-Rufai’s redeployment to the FCT Ministry as Minister, Lawal again moved with his friend and was appointed a Special Adviser. Expectedly, el-Rufai’s election as Kaduna State governor and appointment of Lawal as his Special Adviser on Investment did not come to anyone as a surprise.

Sources revealed that among el-Rufai’s aides, Lawal is the closest to the governor and most influential. Their relationship, it was learnt, dates way back to many decades ago. The Governor’s closeness to Lawal may not be unconnected with both having been friends since Lawal was a bank CEO in those days. They were both whizkids at that time. Said an insider, perhaps the governor’s kindness might just be a pay back time for a man, who stood by him in his struggling days.

These days, Jimi Lawal spends more time in Ijebu-Ode where he has a lovely and magnificient house. How Jimi Lawal plans to upstage the other well established aspirants is the big issue. This is because both Bimbo Ashiru and Senator Lekan Mustapha are close to Gov. Amosun and the Awujale of Ijebu-land. Ashiru in his own case is like Awujale’s son and the Governor is his political godfather. He it was who brought him into polities reluctantly 6 years ago.