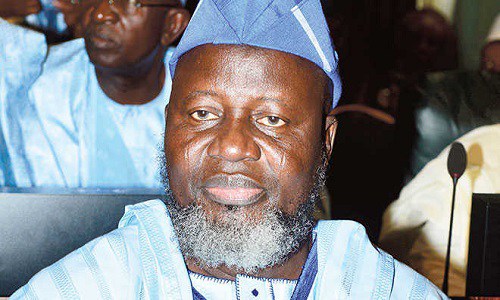 Adebayo Shittu, Nigeria’s Communications Minister, has reacted to the accusation of fraud by his former public relations assistant, saying the allegations were aimed at frustrating his governorship ambition and has threatened a lawsuit.

Victor Oluwadamilare, a journalist who had served as Mr. Shittu’s media aide since November 2015, in the March 12 letter, published by Sahara Reporters on March 22, said the minister defaulted on salaries and other emoluments he was entitled to over 29 months.

Mr. Shittu had allegedly failed to pay the backlog, which would have been N14 million by the end of March 2018. He managed to offset N1 million of the debt on February 6, leaving an outstanding balance of N13 million in unpaid salaries and entitlements.

Mr. Oluwadamilare said he was entitled to N500,000 in monthly salaries and allowances, but the minister disputes this.

Mr. Oluwadamilare said the situation had rendered him unable to meet his obligations to his immediate family.

“For close to one year now, there has been an unresolved feud with my wife because of my inability to effectively fulfill my marital responsibilities and family upkeep,” he said.

“My first daughter, from all indications, may not be able to enlist in the NYSC Scheme in April 2018 because of my failure to adequately fund her education.

“My second daughter had lost one calendar year in the university because of my inability to pay her school fees and other incidentals as at when due. My other children of school age, have been traumatised and discouraged in their educational pursuit because of the irregularity in the payment of their school fees, with its attendant backslash,” Sahara Reporters further quoted Mr. Oluwadamilare as stating in the letter to his principal.

Mr. Oluwadamilare said the minister’s lack of “common sense, justice and fairness” had left him impoverished, beggarly and exacerbated his health crisis.

He mentioned in the letter that the minister is corrupt, reminding him of how he allegedly received hundreds of millions in questionable estacodes to acquire properties for private and commercial uses.

There were also allegations that the minister bought 25 luxury vehicles for himself, “his family members, concubines, and cronies”, despite having eight official vehicles attached to his office, according to Sahara Reporters.

The aide equally stated that the minister has spent way beyond his legitimate earnings on his gubernatorial ambition in Oyo State, sponsored no fewer than 22 members of his family and cronies, including underage children on Muslim pilgrimages in Saudi Arabia.

Sahara Reporters said Mr. Oluwadamilare wrote to the minister on behalf of himself and his colleague, Tajudeen Imam, then Mr. Shittu’s aide on special duties.

Mr. Shittu, who had long expressed his intention to become Oyo State governor in 2019, has been sparring with Governor Abiola Ajimobi for several months. Although both are of the All Progressives Congress, Mr. Ajimobi has another preference for the office. Yet, Mr Shittu has continued to push for the party’s tickets, apparently hoping to leverage on his closeness to President Muhammadu Buhari.

The minister responded to the letter by first firing the two aides hours after Sahara Reporters uploaded the story. He also placed a disclaimer warning the public from further dealing with them on the basis of their association with him.

On Saturday morning, the Nigerian Tribune published an interview with Mr. Shittu. He responded to some of the allegations of living an ostentatious lifestyle, but appeared to have muddled some other aspects.

First, the minister rejected Mr. Oluwadamilare’s figures about his salaries and emoluments, saying payment terms were never included in his initial appointment letter in November 2015.

This, he said, was because he initially thought the government would be responsible for the salaries of his media and other personal assistants, but later learnt that they were not covered under aides that the minister was officially entitled to.

Subsequently, the minister said he wrote another letter to Mr. Oluwadamilare and other aides in 2016, informing them that they would be entitled to N100,000 “stipend” per month, an offer they did not reject, he said.

“I then wrote a letter to him and others sometime in 2016 that each special assistant would be paid a monthly stipend of N100,000.

“In satisfaction, he stayed on the job on the basis of that N100,000 per month. As a minister, I am earning N800,000. If I have two, three, four aides and each is asking for N500,000… You know, the most realistic thing is for him to look for a job elsewhere. Victor didn’t look for job elsewhere because he was happy and satisfied with what I decided to be giving him,” Mr. Shittu told Tribune.

The minister said he made out a cheque for N1.3 million to clear a 28-month backlog for Mr. Oluwadamilare, but did not clarify how the money was calculated. If the aide was entitled to N100,000 per month as the minister stated, then N1.3 million would only cover 13 months’ pay.

Mr. Shittu said Mr. Oluwadamilare had a history of being troublesome and disloyal to his employers, citing Teslim Folarin and Mr. Ajimobi as two of several politicians that he had served as their aide but later fell out with.

He said he employed him despite his unflattering background because he was the only Christian that applied for the position and he did not want to be seen as being comfortable working only amongst his fellow Muslims.

Asked about his real estate investments, vehicles and acquisition of a new printing press, Mr Shittu said such acts were “antithetical to his beliefs as a Muslim and a socialist”.

“Where will I, Adebayo Shittu, with my anti-corruption posture, with my very modest lifestyle all through and with my religious inclination, get the money for all of those vehicles? Does it make sense that somebody with socialist orientation will have that number of vehicles?

“Since I came on board as minister, two people donated two cars to me. Seyi Makinde donated one of the jeeps that I have and a former Accountant-General of the Federation, Mr Jonah Otunla, donated one and I bought one for myself. So, Victor Oluwadamilare will have to explain where the other vehicles are,” he said.

Mr. Shittu said he has two houses in Ibadan and the only house he has in Abuja was purchased with a loan obtained from Jaiz Bank. He denied ownership of any real estate property in Lagos.

The minister did not address the claim that he purchased a new printing press, a development that would be illegal as it breaches code of conduct regulations for public office holders.

On the claims of receiving undue estacodes from public coffers, the minister did not give a clear response.

At a point in the interview, he said he was entitled to estacodes as approved by the president. Then a moment later, he said it would be difficult for him to have earned up to $800,000 in estacodes under the stringent treasury single account policy and threatened to sue Mr. Oluwadamilare for making the claims.

“As a minister, I have a boss. I cannot have a vote without the president approving it. If the president approves my vote and by law, I am entitled to estacode, is it illegal or unlawful for me to take that estacode when I am going to represent Nigeria at conferences overseas? That is the question that you should ask him,” he said.

“How much is $800,000? That will be in hundreds of millions of naira. Look, he will have to be in court to prove and defend all the stupid allegations he has levelled against me.”

The minister also denied living a luxurious lifestyle or sending dozens on Hajj, saying Mr. Oluwadamilare also earned estacodes during official trips but was “only coming out now to use the practice as a weapon against him for political gain”.

“There is this adage that you give a dog a bad name in order to hang it. Because they have a target, they want to stop me, but I will not allow them to succeed,” he said. “The work of my hand will see me through, by the grace of God.”

Some Nigerians, citing claims made in the letter, have accused Mr. Shittu of corruption, and have called on Mr. Buhari to sack him and other appointees facing allegations of corruption

Idowu Sofola, President of the Yoruba Council of Elders (YCE), is dead