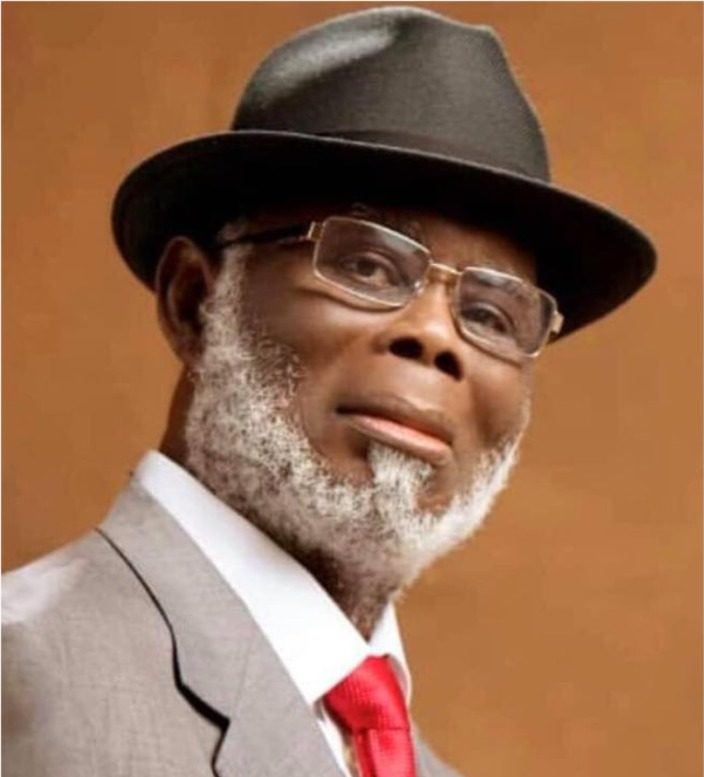 Saturday 13th of March, 2021 was the climax of the burial ceremony of High Chief Olu Benson Lulu-Briggs who was born on May 22, 1930 as a Prince from 2 royal families Oruwari (Briggs) House of Abonnema and Atonaye Pakaa (Pepple) of king Amachree Royal House of Buguma all in Kalabari kingdom. First, his hardworking mother Madam Rachael Kioba Harrison Ogari Lawson brought him up at a time he had lost his father and elder brother to the cold hands of death two weeks apart.

Such remained the story of a man who in 2018 was rated by FORBES as one of the 40  wealthy persons in Africa as he was worth $1.1Billion having operated since 1989 when he registered Moni Pulo Nigeria Limited an Oil and Gas Company which was awarded Oil Prospecting Licenses OPL by the then Federal Military Government led Military President General Ibrahim Badamosi Babangida for almost 10 years he successfully struck oil in commercial quantity in 1998. Such became the raiser to his journey of the wealth of an only child born a Prince but raised up in denial of the luxuries attached to such lofty family background.

City People Magazine Port Harcourt Bureau Chief, EMEKA AMAEFULA (+2348111813069) below brings you an abridged story of late High Chief Olu Benson Lulu-Briggs whose burial ceremony in Port Harcourt and at Abonnema, all in Rivers state was set up in grandeur and was highly celebrated.

The Chief mourner of the late Billionaire Chief Barrister Dumo Lulu-Briggs on Saturday 13th of February, 2021 was crowned and admitted into Abonnema Traditional Rulers Council as he had already emerged as Head, Young Briggs House of Abonnema and Head of O.B Lulu-Briggs family. Below are excerpts of the report of his burial.

The choice of O.M.C funeral outfit actually gave the burial ceremony global class befitting a world class citizen like late High Chief O.B Lulu-Briggs…From the golden white horses driven hearse to the crown gold plated casket to the special automobile and the Pallbearers all looked smart and ready to unleash the latest dance steps rehearsed severally before the watchful eyes of the international community who either visited Abonnema or watched via internet live Television the high tech streaming proceedings of the befitting burial ceremony organized by the Chief Mourner Chief Barrister Dumo O.B Lulu-Briggs as he displayed throughout the one week eventful obsequies ceremony which began on Monday 8th of March and ended on Saturday 13th of March, 2021. The University of Port Harcourt Ebitimi Banigo Auditorium on Monday 8th of March played host to dignitaries as the Evening of DRAMA and TRIBUTES. Then on Wednesday 10th of March, 2021 witnessed Service of Songs and Tributes Night held at newly opened EUI CENTER MONACO, PLOT F11, OFF SANI ABACHA ROAD GRA PHASE 3 Port Harcourt.

On Friday 12th of March, 2021 the bustling coastal town of Abonnema in Akuku Toru Local Government Area became ever busy as the Christian and Traditional Wake Keep was held at the Onubio, Briggs Compound, Abonnema which began at 9pm till dawn with live musical bands and choir groups each displayed several renditions that touched the Sombrero River beach into heaven of a resort.

On Saturday 13th of, March 2021 the climax of the epic burial ceremony of $1.1 Billion worth Chairman of Moni Pulo Oil and Gas Nigeria Ltd, High Chief Olu Benson Lulu-Briggs took place at the newly sand-filled Lulu-Briggs Abonnema which had COVID 19 pandemic Protocols duly observed as at 10 am health workers were seen with sanitizers, aesthetic well-designed sitting arena were arranged bearing in mind social distancing according to Covid 19 Pandemic Protocols observance.

By 12:45 pm the Casket of High Chief O. B Lulu-Briggs arrived at the venue of Lulu-Biggs beach of Sombrero River.

BURIED AS A FAITHFUL CATHOLIC

His Holiness, Pope Francis’ Representative in Nigeria, His Eminence, John Cardinal Onaiyekan led other clergymen in officiating and ministering worship during the burial ceremony proper. It was an interdenominational event but being a Catholic during his lifetime to which he displayed the virtues of a good Catholic as he never engaged in polygamy but serial one as he got married to more than 10-women some of who begot children for him ending with Dr. (Mrs.) Seinye Lulu-Briggs his only surviving wife of 16 years in marriage who raised the concern about not being carried along with the burial arrangements.

High Chief Olu Benson Lulu-Briggs died on 27th of December, 2018 while on his way to Ghana for Christmas and Yuletide vacation in Accra Ghana his death attracted much legal infractions between his last wife Dr. (Mrs.) Seinye and her three stepsons led by Chief Barrister Dumo Lulu-Briggs Chairman of Platform Petroleum Oil Development Company Ltd.

While the inter-denominational service was going on at Lulu-Briggs beach former President Goodluck Jonathan in his tribute said “It is a sad moment for us all. I know Chief O.B Lulu-Briggs very well. In 2007 when I got into national politics, when the PDP nominated me as Vice President to the Late President Yar’ Adua, he contributed to the success of my position. Yes, he has his direct children, but we are also his children. Lulu-Briggs started his life from a humble beginning but ended successfully. He came from a very sophisticated community, Abonnema. He touched the lives of so many people and that is why you see the crowd here today. My prayer is that God gives Dumo the grace to carry on the legacy of his father.”

While Chief Dumo Lulu-Briggs as Chief Mourner was delivering his Vote of Thanks, he recalled his father’s rustic beginning as he said “I thank the former President Goodluck Jonathan, representative of the First lady and every other dignitary for honoring my father. My thanks also go to His Excellency Nyesom Wike for deciding that he would give my father a befitting state burial. It had not been easy for the sacrifice you made to be here. Our father’s humble beginning to successful end should be an encouragement and inspiration to all who want to succeed.”

While in the Profile of O.B Lulu-Briggs, Chief Dumo wrote “The lives of many great people in history are replete with very weird, shocking and unbelievable humble beginnings that mystify the greatness which they attain at the end of their sojourn on earth. To eke out a living, O.B Lulu-Briggs joined other young men to fell trees in the Mangrove forests to hem in firewood for sale to raise money. He worked as a Labourer at building sites and was a deckhand on outboard engine boats.

He relocated to the city of Port Harcourt and lived without help from anyone. He became a truck pusher at the then most notorious ‘Man Must Wack’ axis known today as the Ikoku/Olu Obasanjo Road (Port Harcourt Rivers state).

He located to Lagos in search of greener pastures but unable to get a job in Lagos, he moved to Bida in the present-day Niger State, where he became an agricultural Labourer.

He returned to Lagos and stayed with his mother’s uncle who was a soldier and regularly trekked from Yaba to the Police College, Ikeja looking for a job. He eventually joined the Police Force but left after two years due to poor remuneration and got employment as a Clerk at Mandilas and Karabaris Ltd.

Prior to joining the Police, he made it a daily habit to go to the British Council Library at Yaba to study and was noticed by the British Librarian for his diligence. The new employment at Mandilas and Karabaris Ltd did not only give him a better pay but afforded him time to return to his regular visit to the Library to improve on his education. An opportunity he did not have as a police Constable. Providence smiled on O.B Lulu-Briggs on the first day he returned to the British Library, Yaba, Lagos. The female English Librarian had to make a very special and passionate appeal to the colonial administrators to include him in the list of candidates to be interviewed for employment at the Nigerian Ports Authority even though the date for application had elapsed. She had seen his doggedness, persistence and steadfastness in visiting the Library but he had not been seen in the two years he worked in the Nigerian Police Force. He was successful and was employed as a Clerk at the Nigerian Ports Authority and as though his guardian Angels were waiting at the quays of the Nigerian Ports Authority to open their gates for him, life began to breathe calm, sureness and fortunes on O.B lulu-Briggs. He secured better and regular paid employment at the NPA in 1955. He had a meritorious career and was sent on many training in Nigeria and the United Kingdom.   He was an Accounts Clerk, Senior Accounts Clerk, Acting Assistant Accountant, Industrial Relations Officer; Principal Industrial Relations Officer; Secretary NPA Workers Union for Seven years; Chairman of Maritime Trade Union Federation, Eastern Ports from 1968-1971. He retired voluntarily in April 1978.”

READ ALSO: HOW I GOT THE POWER TO PERFORM MIRACLES 42 YRS AGO – RCCG GENERAL OVERSEER, PASTOR E. A. ADEBOYE

How I Got The Power To Perform Miracles 42 Yrs Ago – RCCG General Overseer, Pastor E. A. ADEBOYE