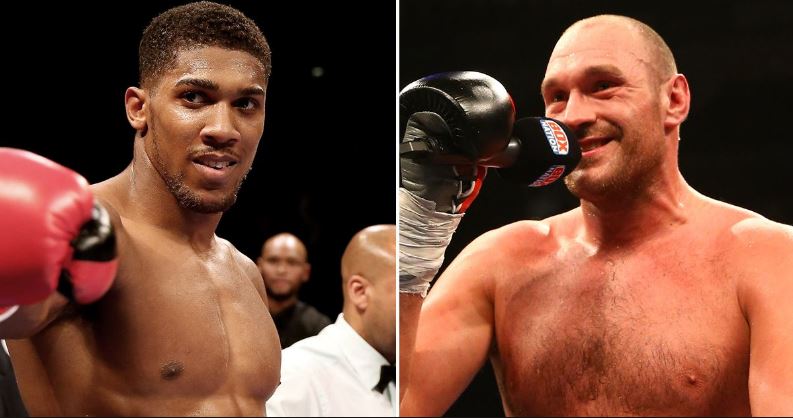 British heavyweight fighters, Anthony Joshua and Tyson Fury are set for a big showdown taking place next year pending on the clearance of the latter by a disciplinary committee.

Tyson Fury has claimed that Eddie Hearn has already booked Wembley Stadium next year in preparation for a fight with Anthony Joshua.

The 28-year-old is targeting a comeback fight on July 8, providing he overturns a suspended drugs ban at a UK Anti-Doping (UKAD) hearing which opens on Monday.

Fury has not fought since beating Wladimir Klitschko for the world heavyweight titles in November 2015, due to a combination of drug issues and mental health concerns.

But in the wake of Joshua’s stunning 11th-round knockout win over Klitschko at Wembley last month, Fury has returned to training and is intent on securing an all-British super-fight with the new champion and has revealed that Joshua’s promoter Hearn has pencilled in a fight in April 2018.

Fury told the Daily Telegraph: “Eddie Hearn has already booked Wembley Stadium for next April.
“There isn’t another stadium where it should take place. I would fight Joshua in October but I believe Klitschko will take the rematch.

“Deep down, I don’t think they want to fight me yet. Joshua struggled with Klitschko. And I took Klitschko to school, toyed with him, put my hands behind my back, literally, while he was letting his cannons go, slipping out of the way of them. They are not ready for that.

“A lot of people have picked AJ to beat me, but I’ve said many times that we are in a sport called “the sweet science” and it’s not a body-building contest or a strongman competition. Joshua is an easy fight for me.”

Fury is now keen to focus on the future but was deeply affected by suggestions he is a drug cheat and denies ever taking any performance-enhancing substance.

He vacated the WBA and WBO titles he held last October after admitting using cocaine to cope with depression, after which the British Boxing Board of Control (BBBC) suspended his boxing licence.

That development came after an ankle injury had forced the postponement of his proposed rematch with Klitschko, and after Fury and his younger cousin Hughie were charged by UKAD with “presence of a prohibited substance”.

Fury added: “I’ve never taken a drug in my life. These people can say what they like but I’m suing them for what they have done to me. They thought they had a villain and that they were going to take me down. This went on from before the Klitschko fight. If I tested positive then why didn’t they ban me then?

“To be honest I didn’t want to live. If I had cheated, fine. But I have not cheated. I beat Klitschko on ability. I don’t need a drug. I’m a giant already. For them to say that about me, it sent me under. I did not want to live anymore. But I feel differently now.

“I’m not annoyed that AJ has been lifted up there by some people as the number one. They were saying before that he could beat me. It is what it is. I am the outlaw of this boxing game – and I love it.

“I’ve been written off so many times. How many times was Muhammad Ali written off in his career? But come Sonny Liston, Joe Frazier, George Foreman, he beat them all. And when the time comes, I’ll go through them, and all their unbeaten records will fall.”

High Profile Boxing Match Between Anthony Joshua and Tyson Fury Announced was last modified: May 8th, 2017 by Arinze Ago