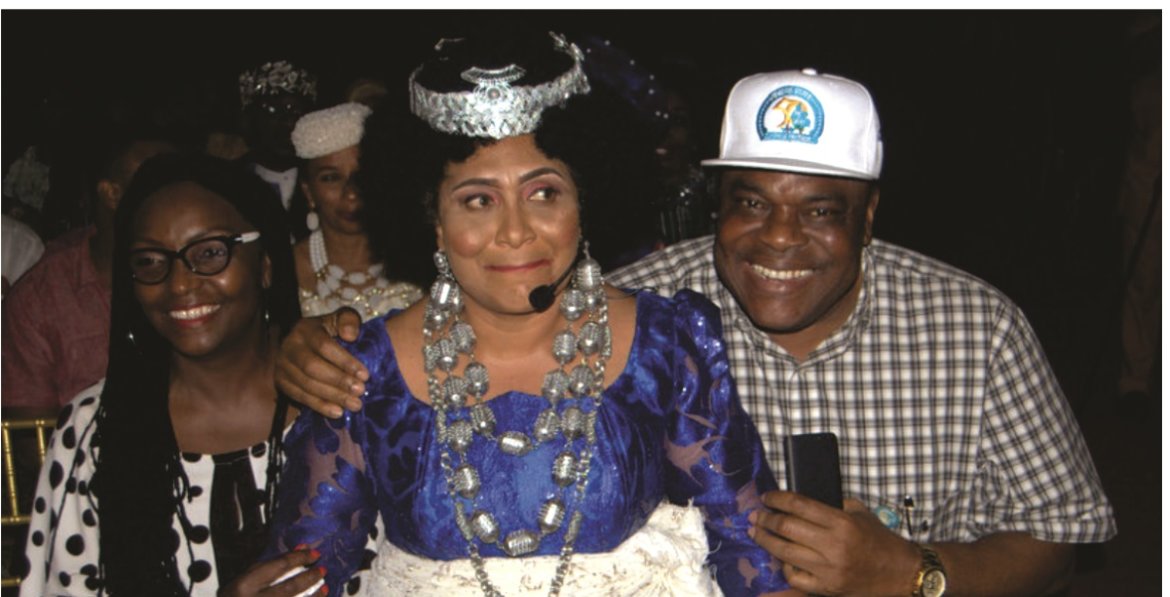 Sunday, 21st of May,2017 was not an ordinary Sunday inside the Marquee of Hotel Presidential in Port Harcourt, as the City of Port Harcourt gathered to celebrate Rivers State at 50. At the event the concept of renowned Screen goddess, Hilda Dokubo’s company, CREATESTARS Media Works and Production which was commissioned to create one of the various events geared

to celebrate Rivers and it’s people wowed the enthusiastic crowd, right from the Red and Blue Carpet that had the photographs of the human resources of Rivers State, as it flooded  the background with images

of people whom action, life and works that have in the past and in the presence impacted positively on the history,growth and development of the State,especially the Youths based on His Excellency, Gov.Nyesom Wike’s urge to restore hope to the Youth. In his words”it is time to provide new opportunities to maximally touch the lives of our people.

It is time to restore hope.”Before the event kicked off guests were treated with both Old and New High tunes by Live band .Some of which brought nostalgia feeling amongst the guests, especially the old people. Songs like; “Oni dodo oni moi moi”,”Omo pupa o!”,and “Ibinabo ye! “by Rex Lawson.While some people were even dancing to the tunes.At exactly some minutes past 6pm, the event was tagged TREASURE kicked off and Songstress,Ms.Lolia Ogan rendered the National

Anthem both verses in the most unusual manner which blew the mind of the excited crowd,which included the Deputy Governor of Rivers State,Dame (Dr) Ipalibo Harry Banigo and former Minister for Sport,Dr Tammy Danagogo .The Dance and Musical Traditional Contemporary Show officially opened with a prayer by Mon Signor Pius Kii and the welcome address by Chief Ferdinand Alabraba, Chairman of the Rivers State

Golden Jubilee Committee.Few minutes later the Regal; Kalabari beauty yet humble, the Deputy Governor who represented the Governor made her appearance waving to all and sundry at the event. She was welcomed

with a standing ovation by the crowd.Then the much awaited Dance/Concert tagged; ‘We are Rivers’ began .The colourful event started with some colourful and richly dressed Rivers State Choral Choirs in Rivers attire who sang some Accapela with their sonorous voices, indeed the event promises to be an event one and the 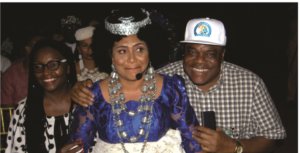 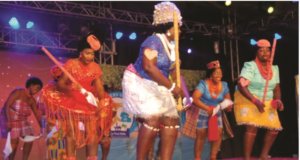 Guest were already yearning for more. The guests were not disappointed when they were treated to a colourful different display of both old and new contemporary dances from various local government of Rivers

State, with the theme: WE ARE RIVERS. Then came the dance drama that shook the hall with so much frenzy, the speech and execution of Late Ken Saro Wiwa. Though depicted in a comic and hilarious manner, those

with their various performances and also acknowledging the works and feats of the likes Amatu Braide,Rex Lawson,Agbani Darego by giving them special performances.Another unforgettable outstanding

performance was given by the duo ,Hilda and Columbus when they sent the crowd to frenzy, a scene where Hilda was going to find out with a White Cock and Red piece of Clothe why people were leaving Rivers State and the praises that was rendered by Columbus about the beauty, food and feats of the Rivers people.The likes of Ogolo Sinclair and many dancers danced to both Traditional and Modern dances, It was for once a blend from across Rivers State namely Iria Dance,Ekpeye,Dance,Ekpetee Dance, Kalabari and Ikwerre Dance.The Military Dance

which tells the story of Ken Saro Wiwa,Aunty Ama Dance, Hilda’s Dance and Iso Dance. left the crowd screaming and dancing .Hilda Dokubo’s son who is also an Actor entertained the crowd with the Hip Hop mixed with a taste of Rivers flavour dance, was another performance the crowd wont forget in a hurry. Like they say every good thing must come to an end. The light of treasure tagged ‘WE ARE RIVERS’ came to a beautiful end with a resounding ovation from the crowd.Indeed the Night of Treasures has come to an end and the beautiful memory still lingers on ,Hilda and her team has out done themselves and from  this event and this should give birth to Broadway Shows in Rivers State and product like this should be exported out of Port Harcoourt and beyond the shores of Nigeria,indeed it was a night of various beautiful and blinking treasure.

How HILDA DOKUBO Dazzled At Rivers @ 50 With Her Company’s Design was last modified: May 28th, 2017 by Bunmi Durojaiye