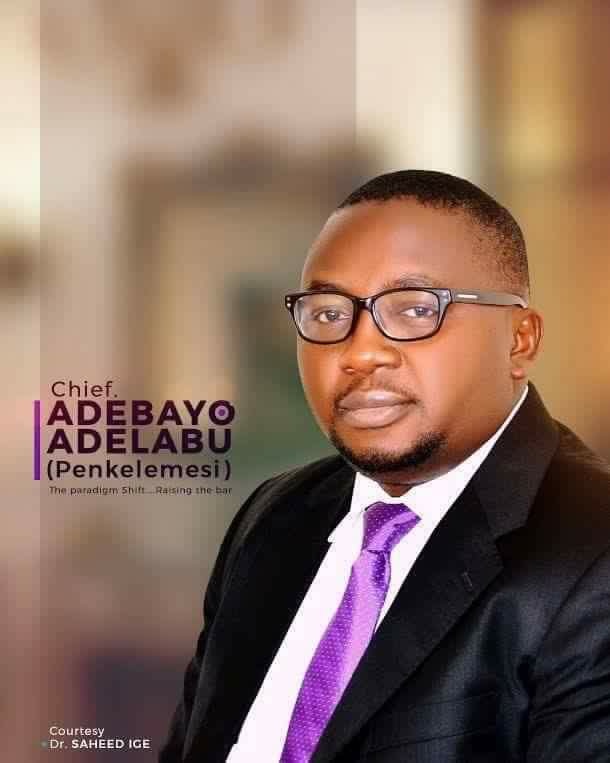 Last week Monday, November 28 2020, Ibadan, the capital city of Oyo State, shook to its foundation, as top celebrities from all walks of life gathered at the luxury Best Western Plus Hotel, Iyaganku GRA, Ibadan. It was the 50th birthday party of one of the illustrious sons of the ancient city and former Deputy Governor of Central Bank of Nigeria, Chief Adebayo Adelabu.

The party wasn’t only a well attended one but was also colourful and glamorous. The best of the best party vendors were contracted for the party. Popular Fuji star, Alhaji Wasiu Ayinde Marshal aka K1 was on bandstand. He thrilled the guests with his classical Fuji music while the party lasted. It was indeed a fun-filled moment as naira and dollar notes rained like they are going out of circulation, apart from the sumptuous meals and all kinds of drinks.

Some of the high-flying celebrities who graced the occasion include the executive governor of Osun State, Gboyega Oyetola; former governor of Oyo State, Otunba Adebayo Alao-Akala; the senator representing Oyo Central in the Country’s Upper Chamber, Senator Teslim Folarin; the Deputy Governor of Lagos State, Dr. Babafemi Hamzat; Barrister Niyi Akintola; Ekeefa Olubadan of Ibadan land, Oloye Lekan Alabi; Hon. Adeyemi Akeem; Hon. Shina Peller; Hon. Rotimi Ajanaku; Chief Wasiu Ajimobi; GASTAB Oils boss, Alhaji Omogbolahan Saheed Adigun and several others who are too numerous to mention. It was also a kind of pay back time for Adelabu who has always been supportive of others whenever they are having social functions or other needs.

Adelabu also used the party to rejig his political structure against 2023, having put his loss in the 2019 guber election behind him. He has since moved on and getting prepared for the political challenges ahead. That clearly explained why his 50th birthday was celebrated for days with lots of activities.

On 25th Friday, 2020, there was a Jumat prayer at Oja-Oba Central mosque and later on the same day, a novelty match was played in honour of the celebrant. The celebration however gathered momentum on Saturday 26th, as 24 unit duplexes, Peculiar Golf Estate at Jericho and 60 rooms Bayse One Hotel at Samonda in Ibadan were all commissined by the Executive Governor of Osun State, Alhaji Gboyega Oyetola and Governor Babajide Sanwo Olu of Lagos State. Not only that, Adelabu and his team also paid visit to 6 motherless babies homes and later had dinner with over 200 widows at his Adebayo Adelabu Foundation, Jericho, Ibadan, on Sunday 27th. There was also a special prayer at his family compound at Oke-Odo area of Ibadan, with his family members and political associates.

The grand finale however took place at different locations across the state on Monday 28, which was his birth date. Some of the locations include Iseyin, Igboora, Ogbomoso Saki, Oyo and Ibadan while the main event held at Adebayo Adelabu Foundations, Jericho, Ibadan. VIP celebrities were hosted into an elaborate and colourful reception at Best Western Plus Hotel, Iyaganku GRA, Ibadan.

Bayo Adelabu has every reason to celebrate. At 50, he has seen it all. He is a fulfilled man by all standards. He is an astute accountant and ex-banker. He has meritoriously served as a banker and rose to pinnacle of his career before he voluntarily bowed out some years ago. Apart from his success as a career man, Adelabu has also established himself in business and political worlds. He plays big in hospitality, farming, property and many other sectors. He is an employer of labour and a philanthropist of note. In fact, it would be an understatement to say that Bayo Adelabu is well connected. His connection traverses business, political and social classes.

What else? Bayo Adelabu is also a family man to the core. His children and wife are his best friends. He is well loved and respected by all and sundry, especially the youths. He is also an Ibadan Chief. He is the Agbaakin Parakoyi of Ibadan land.

Adelabu, born on 28 September, 1970, is a well read and highly exposed personality with an intimidating C.V. His, is a first class brain which speaks volumes of his academic career.

He was born to the family of Mr. Aderibigbe Adelabu of Oke-Oluokun compound, Kudeti Area of Ibadan. His grandfather is the late prominent politician, Adegoke Adelabu aka ‘Penkelemesi’.

Adelabu has also taken up professional courses in various business schools, including Harvard, Stanford, Wharton, Columbia, Kelloggs, Euromoney, and the University of London.

Adebayo Adekola Adelabu started his career with PriceWaterhouse (now PricewaterhouseCoopers), an international firm of chartered accountants and management consultants. During his seven years with the firm, he led and managed various audit and consultancy engagements for large banks and non-bank financial institutions within and outside Nigeria.

He was on secondment to the Central Bank of Nigeria for one year in 1999 when he led the finance team on the CBN re-engineering and corporate renewal project tagged “Project EAGLES”. He left the firm in year 2000 as an audit manager and senior consultant to join First Atlantic Bank as the Financial Controller and Group Head of Risk Management and Controls. He was later promoted to Chief Inspector of the Bank in 2002 and Group Head of National Public Sector Business in 2003.

Adelabu moved to Standard Chartered Bank as the West African Regional Head of Finance and Strategy (Consumer Banking Business) with dual offices in Lagos and Accra. He was there till 2009 from where he became an Executive Director/Chief Financial Officer (CFO) of Nigeria’s largest bank, First Bank of Nigeria Plc. (FBN) at the age of 39.

Adebayo was appointed by former President Goodluck Ebele Jonathan in February 2014 as Deputy Governor, Operations of the Central Bank of Nigeria (CBN).

He served as the Chairman, Board of Directors of the Nigeria InterBank Settlement Systems (NIBBS) and has chaired the board of Financial Institution Training Centre (FITC). He has also served as a member of the Board of Federal Inland Revenue Services (FIRS), Nigeria Security Printing and Minting Company (NSPMC), the Assets Management Corporation of Nigeria (AMCON) and the Nigeria Incentive-Based Risk-Sharing System for Agricultural Lending (NIRSAL).

Despite his rich C.V and money, there is something very interesting about Bayo Adelabu, he is as humble as they come. He is also in-tune with his hometown, Ibadan. He is an Ibadan man to the core. In fact, he sees Ibadan as his personal project and wants the best for the town, in terms of development and recognition.

“I can conveniently call myself an all-round Ibadan man, as my background and growing up traverses the length and breadth of Ibadan metropolis, with a little slip into a couple of the less cities.

I grew up with my grandma at Oluyoro Oke Adu area of Ibadan North East local government, attending Lagelu Grammar School Agugu Oremeji. Part of growing up was also at Arowolo’s compound at Oke Are in Ibadan North West local government with my dad as well as in Odeon Cinema area of Oke Ado in Ibadan South West local government with my mum. I currently live in Iyaganku GRA in Ibadan South West with private business concerns cutting across Ibadan North, North West and South West. Since we are all returning to farms, I’ve got a couple of small farms cutting across Omi Adio in Ido LG and Idi Ayunre in Oluyole LG. I also remember that I used to follow my grandma to sell her wares across Olodo, Lagun, Apateere, Igbo Elerin and Eedeji in Lagelu LG as well as Onidundu and Iroko in Akinyele LG and Oseegere and Ajoda in Egbeda LG. So, as a complete Ibadan man, I have the map of the larger Ibadan metropolis and the less cities on my palms. I am Ibadan original; proudly Ibadan with no apology,” Adelabu revealed in one of his interviews.