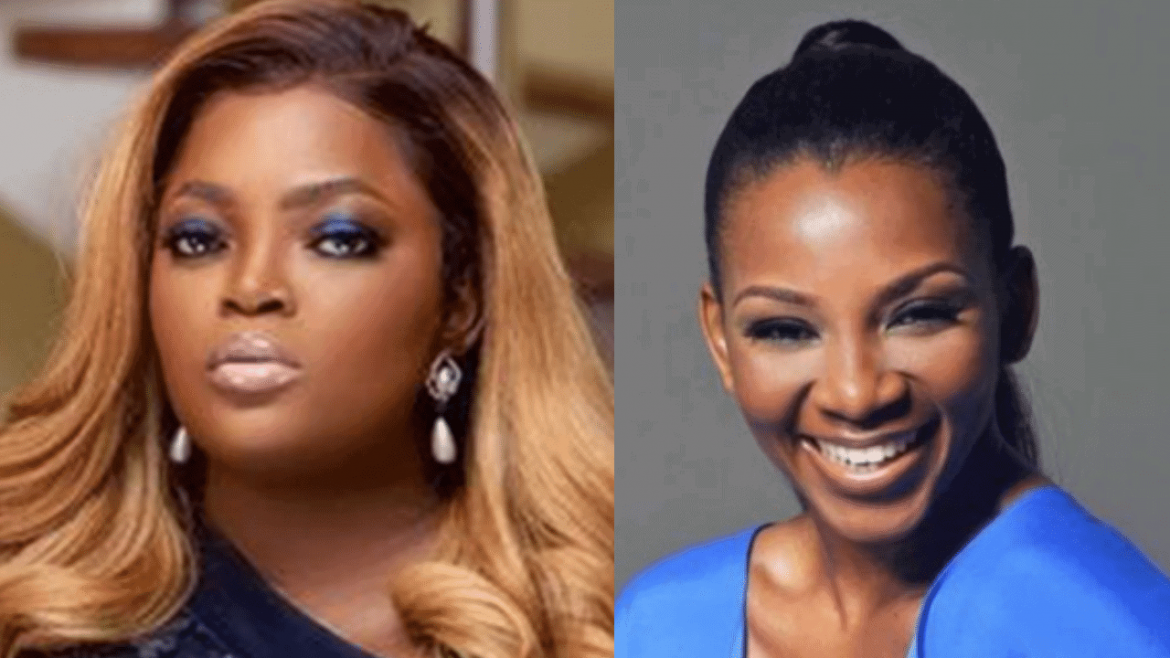 It is a common saying that many are born but few are chosen. In the case of Nollywood actresses and movie producers, Funke Akindele and Genevieve Nanji, they appear to have been born and chosen for the path they later charted in life.

The Nigerian entertainment industry has evolved through many stages and not many people were fortunate enough to survive it. While some people did not rest on their oars and kept on pushing for when their big break would come, others fell off the sidelines and remained only a faint memory in the minds of a few.

The movie industry bigwigs today would not be listed without the names of Funke and Genevieve being mentioned. Well, it was not always peaches and roses for them and they have paid their dues in the industry before attaining their level of importance.

These 2 actresses are big in terms of prominence, international recognition, acquisitions, endorsement deals with several major awards in their kitty.

For Funke Akindele, to most people, it appears the earliest memory of the Nollywood star is when she acted as a young secondary school girl named Bisi in one of the most popular drama series at the time, I Need To Know. J The United Nations Population Fund (UNPF) sponsored series aired from 1988 to 2002. That was when Nigerians got to know of the young Funke Akindele who would later become a big name in the movie industry. Akindele’s talent was undeniable and she had starred in numerous movies mostly in the Yoruba film industry. Her big break however came after the making of her popular movie, Jenifa, in 2008.

Despite it being a Yoruba movie, its comic nature appealed to all classes of people. Before long, a great number of slangs emanated from the movie with many young Nigerians adopting her manner of speaking in the film.

Funke Akindele won an Africa Movie Academy Award (AMAA) for the Best Actress in a Leading Role after she played Jenifa. Its great success also led to part two of the movie being made in 2011 and it was also a huge success. This had successfully stamped her in the consciousness of Nigerians and even broadened her scope away from the Yoruba genre of the Nigerian movie industry. Jenifa remained a goldmine to be tapped and a television series titled Jenifa’s Diary was also launched in 2014 and it is still running to date…

The top actress has been praised from time to time on social media for having a great range especially when it comes to role interpretation. She has starred in movies acting as a tout, lover girl, student, and many more while delivering top-notch performances.

Just recently, she was named the most followed Nigerian actress on Instagram. This came after she hit 13 million followers on the photo-sharing site. This was just the tip of the iceberg and Funke went ahead to achieve more feats. It has been a year in year out of success.

According to the Cinema Exhibitors Association of Nigeria (CEAN), Omo Ghetto maintained its number one spot for three weeks and in January 2021, it had grossed N468,036,300.

Undoubtedly, She is one of the biggest actresses and producers and has all brains and talents when it comes to the movie industry. She is fuelled by passion and hard work. With this, she was announced the most popular actress in Nigeria by BET Honours through data sourced from a wide database of over eight million individuals. The honour came exactly a year she was adjudged the most popular Nigerian actress by the same award organisation through the same process. The Jenifa star surpassed others’ popularity to become the most popular actress in Nigeria.

Funke’s popularity has witnessed a steady rise over the last two decades with a variety of characters that endeared many of her fans to her.

In 2020, the sequel to one of her popular franchises, Omo Ghetto The Saga, topped Nigeria’s box office for seven weeks and became the highest-grossing Nollywood movie of all time in its fifth week, grossing N636.1 million cumulatively.

This achievement is coming after her big break in acting, which came from her performance in the popular comedy-drama, Jenifa in 2008 and Return Of Jenifa in 2010. She continues to thrive on the Nollywood scene with her spin-off series, Jenifa’s Diary, Aiyetoro, Industreet, Jenifa on Lockdown while leveraging new media and network TV stations.

Funke Akindele-Bello is one of the few Nigerian celebrities with a long list of brands as an ambassador. From fast-moving consumer goods brands to telecom brands and real estate, many brands want a taste of Akindele-Bello’s magic wand. With over 13 million followers on social media cumulatively, the multi-award-winning actress also ranks as one of Nigeria’s highest-paid influencers.

From her early days in the late 90s to now, this fantastic filmmaker and actress has grown to become one of Nollywood’s emerging powerbrokers in the Nigerian film industry with loads of achievements to her name. Some of the film characters that have shaped the blossoming career of Funke are numerous.

Born on August 24, 1977, in Ikorodu, Lagos State, Funke obtained an Ordinary National Diploma (OND) in Mass Communication from the former Ogun State Polytechnic, now Moshood Abiola Polytechnic, and got a Law degree from the University of Lagos, Akoka, Yaba. She has acted and produced over 100 movies in Nollywood and owns her own productions and movie school. She has also won over fifteen major awards for her movies. She is estimated to be worth about $3.5 million making her one of the richest actresses in Nigeria today. The all-time award-winning actress always dusts nomination lists and carting away numerous awards, she has been an all-time winner of the AMVCA awards and got over 8 nominations in the 2022 edition.

Her endorsement deals include the Globacom deal, Ambassador to Dettol and Irokotv. In 2018, she was signed as a brand ambassador for Keystone Bank. In November 2019, she signed an endorsement deal with Waw Nigeria, a company that manufactures detergent and bar soap. She is also the face of Molphix diapers, Kellogs cereal brand, Amen Estate ambassador, Jobberman, vita foam, western lotto, and many more.

Likewise, Genevieve Nnaji is one of Africa’s finest and sexiest actresses, who constantly tops the chat of highest paid Nollywood actresses. She is newsworthy at any time with her mind-blowing career. The stunning actress has grown through the years, to become the most recognizable face in Nollywood. Gene who was referred to as the “Julia Roberts of Africa” on an international show, Oprah Winfrey was chosen due to her wide appeal across the African continent and all over the world. She attended the Methodist Girls College Yaba before heading to the University of Lagos. While at the university, Genevieve began auditioning for acting jobs among the many Nollywood projects.

She has already shown that she is a force to be reckoned with. She has starred in more than 100 films over the last 3 decades and her rise to prominence coincided with the exponential growth of Nollywood, as the Nigerian film industry is called, across Africa.

Genevieve Nnaji has become a sort of Nollywood royalty in the Nigerian movie industry. If there was a hall of fame for thespians, this star actress’ image would take a choice position among those of her pairs. But fame and the fortune that followed after did not just happen overnight for this beautiful actress. It took years of hardwork, dedication and a stubborn will to succeed to get her to the stage she is now.

Being one of the most profiled actresses in Africa, Genevieve was once described as the Julia Roberts of Africa by media mogul, Oprah Winfrey. Her ongoing journey to success is one that has had its fair share of ups and downs, but just like every success story, hers has been a result of carefully made decisions and a will to succeed where many have failed.

With her fortunes has also come the fame which has now led her to become a member of the Federal Republic, MFR, the fourth highest honour in the land.

No doubt, She has become a household name and she keeps captivating her audience with her talent. She started acting as an eight-year-old, starring in the popular TV soap Ripples.

Her Nollywood career really took off when she was 19 in the movie “Most Wanted. She grew up in the bustling city of Lagos in a middle-class home – her father was an engineer and her mother a teacher. She won the Africa Movie Academy Award for Best Actress in a Leading Role in 2005, making her the first actor to win the award. In 2011, she was honoured as a member of the order of the Federal Republic by the Nigerian government for her contributions to Nollywood. Her directorial debut movie, Lionheart, is the first Netflix Original from Nigeria, and the first Nigerian submission for the Oscars.

The Mbaise born, Imo State actress grew up in Lagos. She is the fourth of eight children, She attended Methodist Girls College (Yaba, Lagos), before transferring to the University of Lagos, where she graduated with a bachelor’s degree in creative arts. While at the university, she began auditioning for acting jobs in Nollywood.

In November 2015, Nnaji produced her first movie called Road to Yesterday, later winning Best Movie Overall-West Africa at the 2016 Africa Magic Viewers Choice Awards. She has since become an all-time winner of the AMVCA Awards.

On 7 September 2018, her directorial debut Lionheart was acquired by online streaming service Netflix, making it the first Netflix original film from Nigeria. The movie had its world premiere at the 2018 Toronto International Film Festival.

Dubbed Africa’s Sharon Stone in her 2002 movie, Genevieve is “very intelligent” and “was prepared for stardom.

Popularly tagged queen of endorsement deals, Genny has featured in several commercials, including that of Pronto (beverage) and Omo detergent. In 2004, she became the “Face of Lux” in Nigeria in a highly lucrative sponsorship deal. In 2008, Nnaji launched the clothing line “St. Genevieve”, which donates its proceeds to charity. In May 2010, she was appointed to be the official “Face of MUD” in Nigeria.

She is also the brand ambassador for a telecommunications company – Etisalat Nigeria. The deal is reportedly worth N100 million. The Nollywood star was the face of Easy Flex, a new package by the company. She added another feather to her cap as she was made the ambassador for the Toronto International Film Festival (TIFF) 2020. She made another history by sealing a multi-million naira Range Rover deal. She emerged the brand ambassador of Range Rovers SUV brands in Nigeria. She earned about $100,000 in the first six months of the deal. Subsequent months made her about $250,000 richer when she cornered yet another endorsement deal from Polo, a designer outfit marketer of luxury wristwatches, sunglasses and other designer items. Genevieve was reported to have got N35 million from Polo. She was also confirmed as NB Plc, Amstel Malta ambassador making her the first high-profile Nigerian actress to be so endorsed.

READ ALSO: HOW EBENEZER OBEY’S MUM HAD A GREAT INFLUENCE ON HIM

How EBENEZER OBEY’s Mum Had A Great Influence On Him