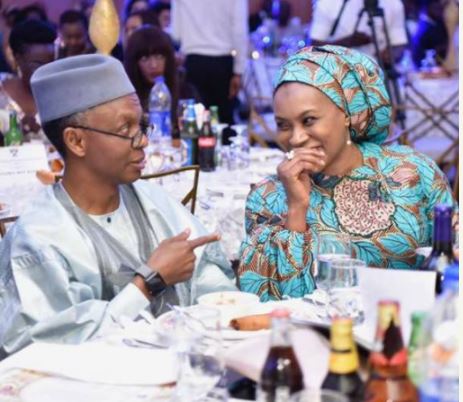 •City People Reveals What They Did

Although the 2019 senatorial election has come and gone, the story of how Governor Nasir El-Rufai of Kaduna state won the re-election bid will not go away in a long time neither would it be written without the immense contribution of his wives as they played a great role in him winning the election. His wives, namely Hadiza, Asia and Ummi will go down in history as having played a significant role in the Kaduna 2019 election. Governor El-Rufai won the election with 1,045,427 votes, while Isa Ashiru polled 814,168 votes to come second in the race.

The vote margin between both of them stood at 231,259 votes, El-Rufai won in 14 of the 23 Local Government Area’s in the State, while PDP won in only 9 Local Government Area’s. A further breakdown of the voting pattern showed that El-Rufai won in the northern and central zones of the state, while in populated by Muslims, while the southern part which PDP won in populated by Christians.

This is not surprising because before the election religion become an issue in the campaign, when El-Rufai decided to pick a Muslim as his running mate, from the southern part of the state, Dr Hadiza Sabuwa Balarabe although El-Rufai made an effort in explaining his decision to do so, saying competent was more important, than religion or ethnic consideration, those against his move did not let him be. Although over the years a religious balance ticket has always been used, believing it attracts wider interest across the zones, and most parties have adopted the practice as a rule in winning elections.

El-Rufai is known for taking the bull by the horn, the Muslim ticket was the first in a major election, hence it was not surprising that the voting pattern reflected the religion persuasion of each zone.

But aside’s the issue of religion other issues worked in favour of El-Rufai, some of the issues he had dealt with in the past three and half years had portrayed him as a someone who in fearless and courageous to take bold steps and implement difficult decision. For example, the reforms he embarked upon in the educational sector was long over-due, as many believe the bulk of the teachers in the state were not qualified, and were only given appointments based on political consideration, none had been able to do anything about it, until El-Rufai’s intervention which sanitized the system. Also , the Governor’s handling of the crisis in the state over the last three years, he has seen governor has been commendable as seen as the best approach towards everything them.

The PDP on the other hand, had issues that robbed them of the victory, sources say, the PDP behaved as it in way too afraid to confront El-Rufai on issues they were not comfortable with instead first kept-quite, and for once Isa Ashiru, his opponent never made any statement to show he was serious about the race, apart from his posters which flooded the state equally, many of the PDP aspirants immediately after the PDP primary instead of staying put, to put up a strong fight to challenge the incumbent defected to other parties. Sani Sidi who came 3rd in the PDP primaries defected to the APC and joined forces with El-Rufai.

Senator Suleiman Hunkuyi in, also had to battle for long before he was given the PDP senate ticket the implication of this was that the unity of purpose required for the opposition party to hold was lacking. This was largely blamed on the governorship candidate of the PDP, who was seen as not doing enough to be a rolling point for the opposition; many saw him as being evasive, and not being serious about being the governor.

El-Rufai association with president Buhari was also a plus for him, as the masses only political ideology is to focus on where President Buhari is, though El-Rufai was not the favourite of the elites, many of them would rather look the other side than to condemn him, but he is loved by the masses. But the icing on the cake which capped El-Rufai victory is the untiring effort of his wives whom were all in the forefront of his campaign from the day it started. The three wives all strategized and were on ground to make sure their husband won the election. In fact, sources told Citypeople that their door to door campaign (Gida-Gida), which is the first to be used by any political party endeared them to the people. The wives whom hitherto were seen as not been assessable, now became the beautiful brides of the communities they visited. ‘This strategy embarked upon by the wives should be emulated by politicians who want to win their election’ An APC stalwart told City People.

The strategy which they embarked upon in the door to door campaign, they made sure they visited each household explaining why they should vote for the APC, this one-on –one down to earth conversation or campaign with the people endeared them to those they visited, Hadiza, Asia, Ummi all seem to work together for a common cause.

While Hadiza, the first wife, who is an architect, writer and novelist embarked on a Local Government tour in the Northern part of the state, to sensitize the women on activities of the APC, Ummi Aisha the third wife who chairs the malnutrition committee in the state would be in the southern part doing same.

The door to door campaign also known as Gida-Gida (house to house) wooed residents and assured them of Government support. Resident were generally pleased to see a governor wife in their vicinity, thereby pleading hundred percent votes, while the Governor’s wife also promises to come to their aid where they are lacking. The Gida-Gida campaign saw the wives going into the remotest parts of committees just to campaign for their husband. Most of these communities had never seen a government official talk less of a Governor wife who was there to wine and dine with them. In some of these communities they had no basic amenities such as primary healthcare, portable water or primary school, his wives in return made sure these communities were listed among communities that will benefit from the dividend of democracy.

Asia, the second wife, who is the National Coordinator Society Agent Violent Extremism, a lawyer by profession and lecturer at Base University was not left out in the campaign as she was seen on TV and the social media campaigning. On the day of the election, all three wives were seen giving moral support to their husband. To many observers in the state Hadiza, Asia and Ummi were great instruments to the re-election victory of El-Rufai.

How I Set Up OMOTAYO Maternity Home...