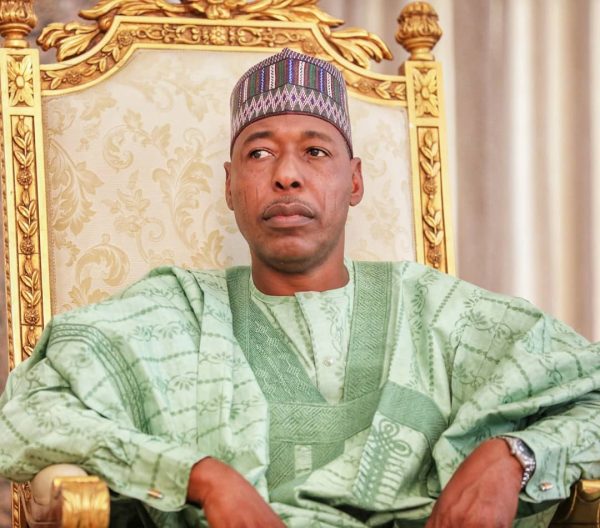 Borno State is one of the most difficult states to govern in Nigeria. And we would tell you why. This is because of the obvious and enormous security challenges the state has been faced with. Due to Incessant Boko Haram insurgencies, the state has been turned into a shadow of itself before May 29, 2019 when the new governor was sworn-in under the platform of APC.

With a breath of fresh hope but little aspiration, Borno indigenes and residents celebrated, when Prof. Babagana Umara Zulum, was sworn in as Borno Governor, on May 29, 2019. Their joy knew no bounds, as they have so much faith in him, owing to the fact that he is a Technocrat who has been tried, tested and trusted in the proper management of men and materials in his previous public positions.

It was widely anticipated that his wealth of experience and laudable achievements as the then Rector of Ramat Polytechnic and pioneer Commissioner Ministry for Reconstruction, Rehabilitation and Resettlement (RRR), would be brought to bear in the fight against Boko Haram insurgency in the state.

While the good people of Borno State expected little or nothing in the areas of Infrastructural and Human capital development in Zulum’s one year in office, taking the state’s peculiar problem of Boko Haram insurgency into account, Zulum has surprised everyone with his unprecedented achievements, ranging from the beefing up of Security to infrastructural and social/ Human capital development within just one year in office. Considering the peculiar problem of insurgency in the state, Borno people were left speechless and in utter admiration of the governor’s giant strides in all aspects of governance, whilst, meticulously revolving within the confines of his visionary,  people-focused, articulated development agenda which he  called: 10-Pact Transformation Agenda.

The immediate past governor of Borno State Kashim Shettima has said his successor Babagana Zulum is “better than me in all ramifications.” Shettima, now representing Borno Central Senatorial District in the Nigerian Senate, also described Zulum as a trustworthy leader. The Senator disclosed this while delivering a paper at a Public Lecture organized by a Coalition of Youths Groups in Birnin Kebbi.

He explained that he crossed a number of hurdles to eventually arrive at choosing his successor, Prof. Babagana Umara Zulum, whom he also described as a trustworthy politician.

ZULUM’S ACHIEVEMENTS AFTER ONE YEAR IN OFFICE

Within 365 days in office as the chief executive officer of Borno State, Zulum undertook 375 projects, of which 326 are physical projects with the remaining 49 as capital-intensive programmes and policies. 375 projects in 365 days? An average of one project per day?

The scholar turned politician has shown clearly that his administration places premium on the security of its citizenry, as it has ebulliently made several sustained efforts in tackling security challenges in the state. With 300 patrol vehicles purchased and distributed to CJTF, military and other sister agencies, establishment of security trust fund, formation of rapid security response team, special protection component for farmers tagged agro-rangers, created, procured security gadgets to CJTF and the upward review of their allowances, visitations to high-risk security areas for citizens’ needs assessments, among many other efforts has shown how focused and determined Zulum is, on security matters.

Secretary to the State Government, Usman Jidda Shuwa, in a statement explained that under 21 of the capital projects, Zulum’s administration is constructing 6,544 sub-urban and low-cost houses in 12 local government areas, for re-settlement of internally displaced persons and refugees.

“On security, 300 surveillance vehicles were distributed to security agencies and volunteers and these vehicles were captured under one project. On education, 76 projects were carried out including establishment of 21 new schools in 13 LGAs. On healthcare, 46 projects were carried out and they include 37 new primary healthcare centers in 17 LGs. On infrastructure, there are 40 projects in 9 LGs and they include 30 new and rehabilitated roads as well as ongoing construction of Borno’s first flyover in Maiduguri”.

“On restoration of civil authorities in local government areas, Zulum’s administration undertook 53 projects in 21 LGAs, 11 of which were started from scratch while 42 were reconstruction works. The projects centered on council secretariats, lodges, police stations, LEA offices, courts and palaces of resident traditional rulers.

“Zulum undertook 38 capital projects on water supply including drilling of 213 new boreholes, 18 projects on electrification, 8 on agriculture and 7 on vocational skills and entrepreneurship development.

HIS ACHIEVEMENTS IN EDUCATION & AGRICULTURE

Babakura Abba Jato, th Hon. Commissioner Home Affairs, Information and Culture in Borno State, has also praised Gov. Zulum. Last week he shed more light on the governor’s achievements in the area of Education and Agriculture. He told City People in Lagos that all the primary and secondary schools we have built in Borno are three storey buildings, and the places are well lush with interlocks and grasses. Each class must have an air conditioner with three sources of electricity; solar, a stand-by generator and our almighty PHCN. We also have functional teaching aides and when we went into lockdown, it was not a problem for us because all radio and TV stations could hook up to any school. There is what we call Kian technology it was introduced by an Indian company, about 1000 teachers were trained so every single subject that is taught in primary and secondary school is loaded into that system. Sometimes you don’t need a teacher to appear in the classroom, the teacher will stay in his house, log on to his laptop and then communicate with his students. That Kian technology has almost all the subjects and those subjects are well crafted and then tailored to suit our own house.

“For instance in terms of agriculture, we trained about 1000 people on irrigation farming like drip irrigation, vertical irrigation, horizontal irrigation and then pivot irrigation. The pivot irrigation (sometimes called central pivot irrigation), also called water-wheel and circle irrigation, is a method of crop irrigation in which equipment rotates around a pivot and crops are watered with sprinklers. This is why there is nothing that doesn’t grow in Borno despite the weather. Like the stage two of the Chad basin, what we did because of that problem was that 20,000 hectares was seeded to produce rice, produce maize, guinea corn and millets but you wonder how people can go to the farm because of this problem. So, the governor came up with what we called farm merchants in collaboration with the Nigerian Civil Defence who are specially trained farmers. They were given fast moving vehicles and communication devices that can talk to each other at whatever angle, whether or not there is GSM service. These farmers are also selected based on households because we cannot sustain feeding all the people who are in this problem on a monthly basis, they have to produce the food that will be bought by the government and subsequently distributed into the areas where farming activities is slow in the basin.

READ ALSO: HOW CITY PEOPLE WAS BORN IN NOVEMBER 1996

How City People Was Born In November 1996