How I 1st Met My Husband At His Church 16 Years Ago – Pastor POJU OYEMADE’s Wife, TOYIN Reveals Love Story 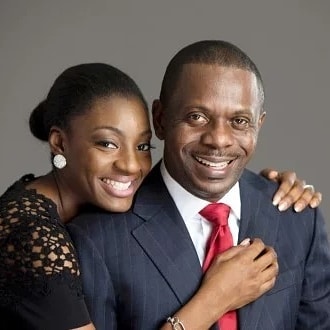 •Talks About How They Got Married 11 Years After Meeting

Pastor Poju Oyemade is one of the popular pastors in Nigeria. He is well-rooted in the word of God and well-loved amongst his contemporaries. He is the founder and senior pastor of Covenant Christian Centre, Lagos. He has been married to his sweetheart of many years, Toyin Fajusigbe popularly called Toyin Faj for 5 years now. Before Pastor Poju got married, he was one of the hottest bachelors in town whom many girls look up to.

“When is he going to get married” was the question on the lips of many people for a long time who knew his marital status then and more so as a pastor and indeed that stopped immediately when he walked down the aisle with his wife, Toyin Faj. It was one of the biggest news of that year as many were anticipating to see or know who his wife will be.”This shall be my last year as a single guy’’, this was the big announcement pastor Poju Oyemade made on the 1st of January 2015 that his marital status is going to change same year. 5 weeks after making that announcement, he puts his words into action and his choice for a life partner is the beautiful soul, Oluwatoyin Oyemade née Fajusigbe.

Not much was known about their relationship until he made the announcement that he was getting married. It was such a colourful wedding on February 7th which attracted the whole social radar in Lagos 5 years ago. Who is his beautiful wife? What was the attraction and how did they meet. It is a gist that has never been told by anyone. Few months back, precisely on Father’s Day celebration, his wife posted his picture to celebrate him and narrated how the journey started.

She wrote” It was October 2004. I was walking into Church, then Covenant Christian Centre (Yaba), for my second visit. As I got to the entrance, a chance run-in happened with you, cos you were also walking in at the same time and then you stopped me for a conversation!

I would always remember the first words you spoke to me- “You’re new to this Church “ and I remember thinking “does he know everyone who is new to church? That run-in has blossomed to become a lifetime journey #LIFE.

Happiest Fathers Day to you. You are so loved and Truly appreciated! Grace and More”.

Their marriage has been on a roller coaster since they got married and she has blended well with her husband to support his vision and teach the word in an insightful way. They never cease to celebrate their anniversaries or birthdays when it comes and the marriage keeps waxing stronger.

Toyin is a Media Entrepreneur who was involved in the production of leading shows like Moments With Mo,  NdaniTV and a host of documentaries. Her documentary film ‘Unbroken: The John Sumonu Story’ which she directed and produced, was nominated for best documentary at the 2014 Abuja International Film Festival. She is an ambassador of the National Student Summit. She is a New York Film Academy graduate. Popularly called Tfajj, she attended Federal Government Girls College, Oyo State and is a 2006 graduate of mass communication from the University of Lagos. The former employee of Guaranty Trust Bank left the bank to focus on her passion for filmmaking. She worked at Ndani TV for less than a year before moving on to concentrate on her personal projects.

Described as very prayerful, she is the founder of StoryTeller Media NG, a media outfit with interests and focuses on production and presentation of media content across various platforms. She is very reserved and unassuming, no wonder many of her friends were surprised at the news of her impending wedding because they had no idea she was dating the popular man of God. Her passion lies in media, ministry and music and the key is to use those areas to touch and impact lives positively and for the kingdom of God as she once said.

The beautiful woman who initially wanted to be on the screen either as a newscaster or an actress runs a YouTube vlog called Tythoughts and in one of the episodes, she spoke briefly about her background and growing up.

“I am Oluwatoyin Poju Oyemade, also known as TY. I was born 36 years ago, on the 13th of July precisely. I was born in Lagos and live in Lagos. I was born into a family of 6 and I am the 6th child. I have always been an independent person because my siblings are much older than me and I was always the one at home..I grew up in a very different kind of way. I spent so much time with my grandmother. I attended Chrisland Primary School. I did not make it to Queens College for some reasons I did not know, then I went to Federal Government Girls College, Oyo. Going to Oyo made me strong, built me. It was a capacity-building time for me. I was a teenager when I lost my older brother. I realized that losing my brother then to me demystified death and it really shaped me to have another thought about death.

I studied mass communication at the University of Lagos. I wanted to be a newscaster. It was at the University of Lagos that I got born again. I was born into a Christian home though. It was a failure in an exam that led me to Jesus at my year one. I belonged to a Sovereign army fellowship and that was where I gave my life to Christ. It was when a music minstrel, Enitan Adaba was ministering. I served at Zamfara State. I acted a bit before my NYSC in an MNet series film, edge of paradise. I was posted to the capital, Gusau during my NYSC in Zamfara. I did my one-year youth Corp at Ministry of chambers and commerce. My first official job was working with Moment With Mo of Mo Abudu which was the most solid foundation I could ever had as my first official job”.

Her husband, pastor Poju is a man of God with anointing on another level. born on May 8, 1968, he got married when he was 47. He is simply known as a teacher of the Word of Faith with insight on how believers can apply the biblical principles in their daily lives. His church, The Covenant Christian Centre Church was founded in 1994 and located at 400 Herbert Macaulay Way, Yaba, Lagos. He attended international school Ibadan (ISI) and went to the University of Lagos. He was ordained into the ministry by the Bishop David Oyedepo, presiding bishop of Living Faith Ministries Worldwide popularly known as Winners Chapel. Pastor Poju Oyemade gave his life to Christ at a very early age while being mentored by the likes of Chris Tunde Joda of Christ Chapel and Bishop Oyedepo of Living Faith Church. He received calling to go into full-time ministry while in the University. He founded the Covenant Christian Centre on March 30, 1994, and was consecrated by Bishop David Oyedepo at Yaba, Lagos.

Pastor Poju is known for hosting regular Faith Seminars, Singles’ Summits, Annual conference “WAFBEC”, financial and Business Seminars where believers are taught the word of God and how they can possibly apply it to their daily activities. He also hosts the popular television programme “Insights for Living” which airs on Silverbird, Channels television and Revelation Channel (UK).

The convener of West African Faith Believers Convention (WAFBEC) and relationship expert, was joined together with his wife, Toyin on their wedding day by Bishop David Oyedepo at the Covenant Christian Centre, Iganmu Lagos.

How Nollywood Actress, Ajenifuja Temitope Emmanuela Is Making A Difference In The Industry