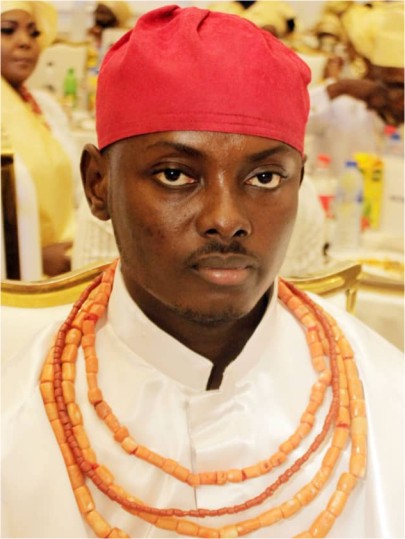 HRH Osagumwenro Eresoyen is the Enogie (Duke) of Uhogua, a village in Benin City, Edo State. He is the 9th duke of one of the fastest developing communities in Benin.

The young, vibrant, and well-read Enogie succeeded his late father, the immediate past Enogie, Ekiroghuagnen Idumwonyi Eresoyen who had reigned between 1995 until his death in 2017. As a result of this he was installed as the new duke of the village at the age 21 making him one of the youngest dukes under the highly revered King, Oba Ewuare II of Benin Kingdom.

City People’s JAMIU ABUBAKAR and NURUDEEN SALISU saw the young and stylish traditional ruler at a public function and got him to speak on how he became a Duke in Benin plus with how he has been leading his village to greatness. Below are the excerpts from the chat. So enjoy!

Tell us about your village and its people?

My village is a dukedom from Benin kingdom under the jurisdiction of the Oba of Benin, His Royal Majesty Oba Ewuare II. Basically, we are mostly farmers but due to rapid development taking place here, there are more houses in my domain. My Dukedom is one of the fastest developing communities in the Benin kingdom. It also houses the Internally Displaced Persons (IDP camp) in Benin.

As a young king, how do you cope with the task of running the traditional affairs of your village?

Normally, when people ask me this, I usually tell them; how did you cope with being alive? Well, I believe it’s destiny. I don’t think it’s man-made. If you know so much of the tradition of our history; the Benin history, we have been existing for so many years. So, it’s a practice that has been on since the beginning of time. So, I believe it’s destiny. Every one of us has one or two things to do in life. I believe this is mine and I have to adapt. There’s a saying that God cannot give you what you can’t handle. I have to adapt. There’s this saying that God cannot give you what you can handle. So, I believe my age is not a factor. It has nothing to do with the responsibility. The responsibility has made me understand more about life. I don’t think there’s any big deal about me being a traditional ruler at my age. Though in Benin there’s nothing like being a young ruler. A ruler is a ruler. You cannot call a policeman a police boy if he is 19 or 20 years old. So, I believe it’s my destiny and I’m used to it. I’m grateful to God and my ancestors for it.

At what age did you become a king?

Tell us how you emerged as the king of your community?

For the Benin people, it is hereditary. So, that is how it works. I lost my dad. I’m his first son, so I became the Enogie, as the heir apparent. There is no puzzle to solve. It’s just hereditary that the first son succeeds his father. So, that’s how it works

So what’s the experience of being a king like?

What developmental plans do you have for your community?

What can you say about the present state of Nigeria?

I believe it gets dark the most when it’s close to dawn. Definitely, we all know the circumstances of this country but being a traditional ruler, someone of hope; I believe we are close to our breakthrough. We are close to a new dawn that we all will benefit from.

What’s your take on promoting the indigenous culture?

Tell us a bit about your formative years and educational background?

I always tell people I grew up like every normal child. My father was a simple man; a loving, peaceful man. Anyone that knows him always says the same thing about him. So, I grew up as a normal child. I don’t think there was any special treatment for me. I was born in 1996. I attended Pame and Garrick Memorial Secondary School located in Benin. I studied at Ambrose Ali University, Ekpoma.

How I Became The Youngest Duke In BENIN City – HRH OSAGUMWENRO ERESOYEN was last modified: September 14th, 2021 by Jamiu Abubakar

What Prophetess ASUBIARO’s Children Will Miss About...