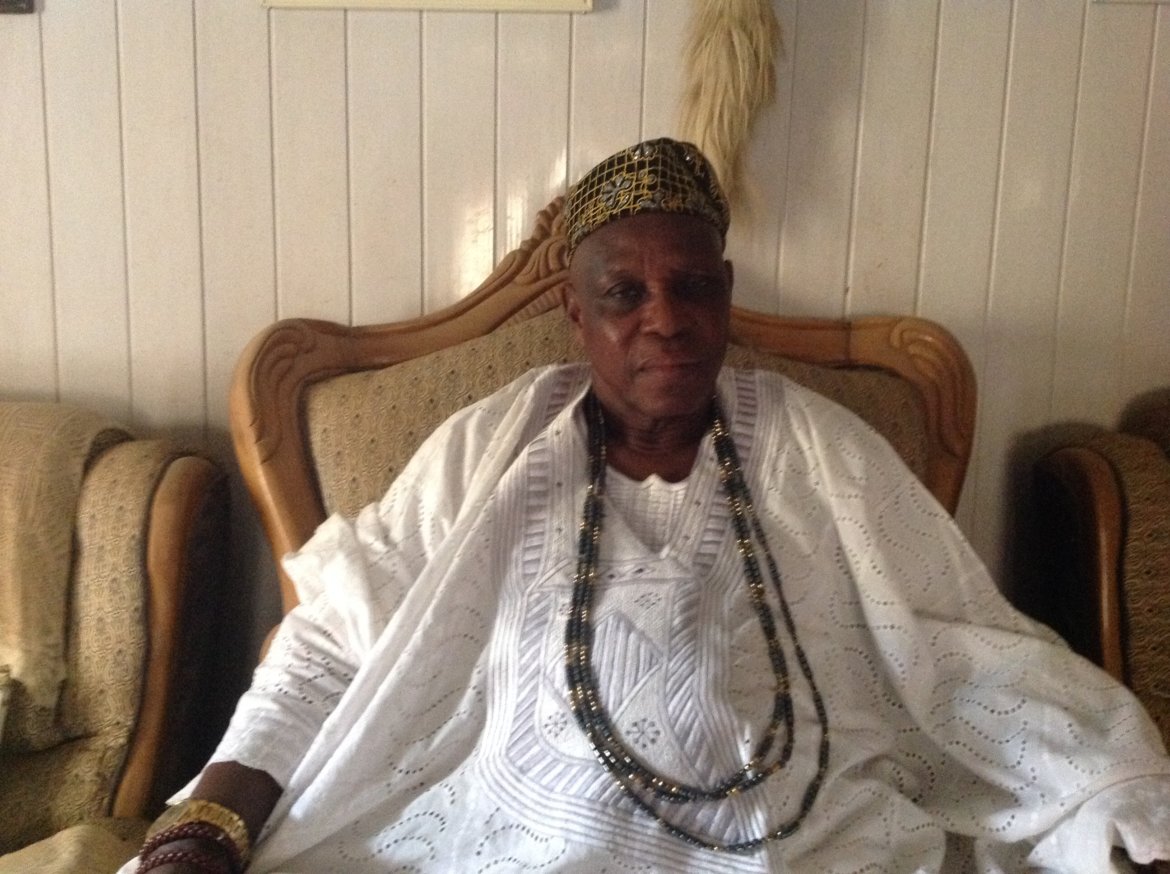 The Baale of Odemuyiwa, High Chief Solomon Olufemi Aina Balogun, who also doubles as the regent of Egbeda in Lagos celebrated his 11 years on the throne recently. The high chief who is also soon to be crowned the Oba of Odemuyiwa, making him the first king in Odemuyiwa, spoke with City People about his achievements, challenges for Odemuyiwa community and the outlook for Alimosho. He also unveils the next rulin house that will become the king of Egbeda.

May we meet you, sir?

My name is High Chief Solomon Olufemi Aina Balogun. I am the Baale of Odemuyiwa.

Are you in any way related to the earstwhile King of Egbeda, whose name was Samson Alade Balogun?

What can you say about the misconception that Balgun (the late Elegbeda was from a maternal line to the family in Egbeda?

That is not true..

We are the Kafowosebi-Omoya. We brought Obaship to Egbeda. The late Oba was Samson Alade Balogun and he’s from the paternal line. After he became the king, we shared the ruling house in Egbeda.

Those are the four ruling house.

What about the Karimu Laka family sir?

They are the Isiba Oluwo ruling house.

For how long have you been the Baale of Odemuyiwa?

Where we are now, our father whose came here some hundreds of years ago are called the Ajose Oyigbogun ni Ojo. He came from Ile Ife with his people. When he eanted to leave he took Edan, Ogun and Esu along with him, he was a hunter and farmer. When he left Ife, he went to Oyo to hunt with his wives and children. He left there to Ojo because he was both hunters on land and in water. He would o to fish and hunt on land. He was from iseyin. When he left Iseyin, he came to Imesan compound in Idimi. It is from Idimu that we came here. He would hunt on land here in Idimi and go to Ojo to fish. He met a man in Ojo who said he wanted to follow him to Idimu area.

They got here and they started hunting together here around Idimu. By the time other resident saw the stranger and queried him, they were told that “The hunter brought him” which in Yoruba means ODEMUYIWA.

The man we are talking about is called Towobola. They gave them land to farm and there was no fight. But during festive season, the farmers will bring harvest to give our fathers as homage. At a point they started adding money to the gift. The first Baale was Tijani Towobola. About that time the man who owns this place and Aina Agberi and Alake came together.

Ajose gave birth to Olosi, Kubanje, and Lanjoko. These three are the ruling house in Odemuyiwa. Amongst those that are here and the ones our fathers gave land to, we sat down together and gave them chieftaincy title, including the Odemuyiwa.\

We have been living in peace ever since.

The ruling houses here are Olo-Osi, Kubanje and Banjoko. I am from Olo-Osi and I am the first to vouch for the Oba of Odemuyiwa.

Which area will you be controlling as an Oba?

Since there has never been any king around here, there are seven Baales around here inclusing Mosan Okunola. As the first king among the seven, I will be the one in charge of the other six until another Baale becomes king.

Does that make you the automatic chairman of the council of Baales in these areas.

Yes, Until another person also get elevated to become king. In that case, we will start to  rotate the office by tenure.

How is the preparation?

We are still on it..

What is the position of government about this?

The problem is bureaucracy, I have gotten my declaration since the time of Asiwaju Tinubu, we were working on the part two of the declaration until Asiwaju left office and Fashola came in, we had to start the processing afresh. It also dragged on until Fashola left office and Ambode came in. we have started again now. That is why we are appealing to this government to quicken the declaration and paper works.

There have been peace and tranquility here since inception and that have not changed. We are law abiding people and whenever there is crisis, some times I personally go to the area and settle any form of hot argument.

When a Baale has been on throne for more than ten years and its peaceful, there shouldn’t be any crisis. We urge Lagos state government to do the needful.

What community development project have you been doing to support the government?

Ever since the day I assume the office of Baale, I have become the father of Odemuyiwa community. I have also personally funded some projects here like the gutter at the junction.

Another issue is the boundary adjustment. This area belongs to Mosan Okunola, but our mosque has been carved to Egbe Idimu, my palace is carved to idimu Egbe, my church is carved to Idimu Egbe.  The Imans are also worrying as we have been left alone. Idimu Egbe will say the responsibility of our area falls to Mosan, while Mosan people will send us back to Idimu Egbe. That has been the issue.

What is the relationship between you and the Local Government Chairman?

The relationship is good. The woman there now is very wonderful. She pays the widows, orphans and the unemployed. He even empowers the youths and elderly. So is the chairman of Egbe Idimu. The relationship is peaceful. Akowonjo Egbeda chairman and his vice are also very cooperating.

What are the things you want to put to the Government notice.

I want the government to look into Seliat Odemuyiwa road. The entire roads that link to Iyana Ipaja, Idimu, Okunola and Isheri usually take this place once there is traffic. This has consequentially damaged the street beyond what we can handle.

We are imploring Governor Ambode to help fix this road as we know he’s fully committed to road standardization in Lagos state. And he should also consider the Baales as we have nowhere to go and nothing to do as we are all old.

How do you joggle regency and Baale at the same time?

It’s been God. If God gives you something to handle, he will equip you with all the tools that will make you perform optimally. See Governor Ambode for instance, you can image how he’s been able to run the whole Lagos state without crisis. Whenever I am here in Odemuyiwa and anything comes up in Egbeda that threatens the security of the place, I don’t give directives from my house; I go there directly and solve whatever crisis there is.

Which of the family is next to become king in Egbeda now?

It is Isiba Oluwo that is next, the Karimu Laka family; we have been able to solve all the family crises. The case was in court before but I directed that they should bring the case back home for us to settle amicably

Before You Become Baale, what were you doing?

I attended Standard 6 because in those days, families usually face on person in terms of education. Family faced Elegbeda, due to his intelligence. I was a fashion desiner, radio repairer and I am also a farmer. I later became sand and stone supplier. By God’s Grace, I am also a traditional herbalist. I used to take delivery for pregnant women before I became Baale too. Some of my children are also familiar with the herbal treatment.

What can you say about modern day Technology?

I am the Otunba Isegun of Egan. The white people have taken all our history and artifacts. They have taken them abroad and have started using them over there. We have been cajoled into believing in modern technology. Traditional rites are very important in our families.

I have a masquerade as I am. you cannot over emphasize the important of tradition in our country. All these deities have the roles they all play and cannot be tampered with.

Do you know that raw cassava can soaked in water can cure stroke and convulsion?

Also, no king can emerge successfully without observing the demands of tradition. If any king disregards tradition, the king will have problem. His people will begin to dislike him and he will be making a lot of mistakes.

‘How I serve as Baale and Regent at the same time in Egbeda’ – Chief Solomon Aina Balogun was last modified: May 11th, 2018 by Reporter