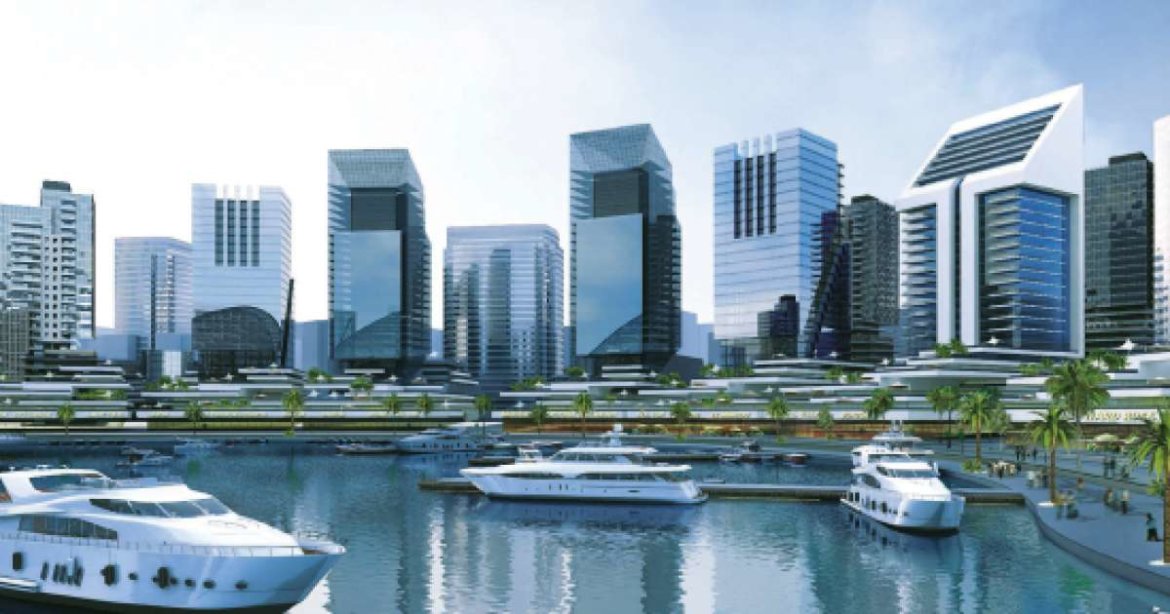 Chief Tunde Fanimokun, in his 2009 book on the activities of Alhaji Lateef Jakande as both Lagos Governor and Works and Housing Minister, he revealed a lot about all LKJ did to develop Lagos. For 16 years, Chief Fanimokun was a seasoned administrator and a former Permanent Secretary in the Lagos State Government before he voluntarily retired in 1985.

In his book, Jakande His Story, Fanimokun who is one of the closest Civil Servants to Jakande revealed how Alhaji Jakande developed a big estate that is today known as Banana Island in Ikoyi area of Lagos. Below are excerpts from the book.

The Banana Island is another entrepreneurial venture of Jakande in office as Works and Housing Minister. It is a novelty of a paradise on earth planted by man on the Lagos Lagoon. It is located at the serene Ikoyi end of today’s Lagos Megacity. Jakande himself described the wonderland project as an abode meant for the super-rich who desire to live in heaven before the end of their earthly journey.

It is truly a model of exotic real estate in Nigeria. As a project, its orientation was strategic; its timing was perfect; its design was excellent; and its mode of execution was extraordinary.

It was conceived, planned and executed within a period of 6 months, under Jakande, as the Honourable Minister of Works and Housing of the Federal Republic of Nigeria. The original idea of creating such an island was propagated, promoted and funded by an Architect, Town Planner, and Engineer, Chief John Adebayo Adeleke, in the early 1980s. At that time, it was an integral part of a private investment initiative known as the Lagoon City Project, consisting of a cluster  of proposed thirteen islands. According to Chief Adeleke’s son, John Adeyemi Adeleke, part of what informed his father’s idea was the need for Lagos State to have 2 export processing zones with a dedicated zone at the Ikorodu port, a deep water port way down Lekki and a privately-managed airport project. Chief Adeleke’s idea was to transform the proposed 13 different islands in the Lagos Lagoon into a flourishing mixed development of residential, commercial and industrial areas.

It was described as one of the most audacious and ambitious urban development projects in the history of urban development and planning in Nigeria. Governor Jakande wholeheartedly endorsed the above private initiative and provided government support. Unfortunately, the Buhari/Idiagbon coup terminated the dream project. Between 1984 and 1994, under the military, the investment package was adjudged undesirable. Consequently, it was jettisoned, discarded and abandoned. The presumption then was that  the “Horse-shoe – shaped” Island already created under the pilot scheme would soon be submerged as a result of settlement. It was an erroneous judgment on the part of the Panel of Enquiry which investigated the project and a tragic misdirection by the then Military Administration of Governor Mudashiru. The Panel, led by Justice J. O. Kassim (rtd.), recommended that the project should be terminated on the grounds that it was not well conceived.

According to that Panel, the project would adversely affect the Egbin Thermal Station, the Nigerian Port Authority’s channel and the aquatic life of the lagoon. It transpired later that the magnitude of the project, its complexity and its futuristic glamour, were totally beyond the comprehension and competence of the Panel of Enquiry and the military junta. The “dream” that was killed in Lagos State in 1984 was very similar to the “reality” today in Dubailand, most especially the “Palm Islands”, the “Lagoons”, the “Sports City”, the “World Central International Airport”, the “Business Bay” etc. For instance “The Lagoons” as designed in Dubai consist of man-made seven landscaped islands inter-linked with bridges comprising residential units, shopping centres, office buildings and marinas.

One decade later in 1994, Jakande utilized the opportunity of his federal appointment as Minister of Works and Housing to revisit the “Horse-shoe -shaped” Island component of the private initiative earlier dismantled by the Lagos State Government. The Honourable Minister then resuscitated, enlarged and proved beyond all reasonable doubt, the brilliance and sustainability of the original project under a pioneer public-private partnership programme. In effect, the stone which the builder once rejected in 1984 became the corner stone in 1994 resulting in today’s Treasure Island, which Jakande renamed Banana Island. The new Island was linked to Ikoyi via the Tumble/Onikoyi axis. That final choice was made out of the many options examined by the professionals and consultants in engineering, erosion, pollution and real estate development from both the public and private sectors. At the end, the original idea for a possible linkage by bridge was discarded in favour of a linkage by land. Consequently, an Annex to Banana Island also emerged consisting of distinct water-front premium plots. Today, B.I. (Banana Island) is universally acknowledged as a success story in the history of real estate development planning and great achievements. How was it repackaged and successfully transformed into reality by Jakande?

Right from the time of the resuscitation of the former Horse Shaped Island of only 52 Hectares to the completion stage of what was re-christened the Banana Island, Jakande put in place, a Special Management Structure within the federal bureaucracy. It was a marvelous and most imaginative design to ensure success. A Special Implementation Committee (SIC.) was empanelled by LKJ right on the site of the old island during his maiden inspection visit in 1994. His SIC was given full ministerial authority and all necessary support. It was deliberately insulated from the normal roadblocks within government bureaucracy. The author Chief Fanimokun was the Chairman of the Special Implementation Committee in his capacity at that time, as the Special Assistant (No 1) to the Honourable Minister in the Federal Ministry of Works and Housing, (FMW &H) with supervisory function over the Federal Housing Authority (FHA). Two worthy colleagues, Engineer (Chief) J. O. Kogbodoku (Special Assistant No.2) and Alhaji A.A. Hassan (Personal Assistant Housing to the Honourable Minister), were on the Committee as members. They served along with selected Departmental Heads in the Ministry, and the FHA or their representatives. Among them were the following most outstanding professionals. Dr. Albert Ikomi, Wole Okunfulure, Surveyor P.O. Kassim, Engineer Onalaja, Engr. A.A. Oshikoya, Mr. E.A. Olawuni, Lawyers A.M. Bakare and Yetunde Fashade, as well as Lawyer Ike Odoe (the Secretary of the LUAC). At the technical level were Messrs Adebayo, Jaji and Oyinbo. At the end of the whole exercise, the top functionaries of the FMW &H and the FHA confessed that they had never worked at such an incredible speed of action and a strictly businesslikeapproach on any other project under any previous administration. Jakande was the motivating factor.

As the project progressed according to plan, sandfilling was completed within schedule and the package was designed as self-financing in its entirety, including provisions for infrastructures and facilities. It did not require any budgetary allocation from the Federal Military Government. The estimated total cost was about #2 Billion at inception, and the projected gross revenue was in excess of #6.2 Billion.

That income was derivable solely from the allocation and sale of only a portion of the new premium land. For instance, the promotional sales of twenty-five residential plots (out of a total of over 400 plots), would yield more than enough to cover the entire cost of hydraulic sandfilling of the new Banana Island and its Annex, as well as, provide a huge stockpile of sharp sand for subsequent development works on the new landmass of over 135 Hectares.

It was a most exciting assignment to all who were involved. Today, the Banana Island venture of Jakande is a monumental legacy and a product of excellence in visionary leadership and a model of entrepreneurship in governance. It is a glorious contribution of inestimable value in the novel provision of additional prime land in Ikoyi, stock of housing units, employment generation, revenue diversification, wealth creation, and sustainable development. A special tribute must also be given to Major General Abdulkareem Adisa, who succeeded LKJ as the Honourable Mnister of Works and Housing. The new Minister acknowledged the project as practicable and he promised to complete it. He sustained the venture to final fruition, although on a totally different vision and mission as a government promoted project. He handed over the heritage on a platter of gold, to a private developer after the sandfilling had been fully completed. That beneficiary is C & C Construction Company (Chagouri and Chagouri), widely believed to be closely connected with the late maximum ruler, General Abacha. The rest is now history. For  his own part, Jakande deserves everlasting ovation. It is a sweet  story of a legend and an entrepreneur in public service.

The Banana Island would have been impossible without the Vision, Mission, commitment and characteristic drive of Jakande and also his successor Major General Adisa for his will-power to conclude an extraordinary project resuscitated by his predecessor in office without resorting to probes and blackmail which scuttled the previous private initiative by Chief Adeleke. Otherwise, the Banana Island, today’s haven of the super-rich, would have ended up as another abandoned or white-elephant project.

Jakande disclosed that he visited the former Horse-shoe shaped Island in 1994 and resolved to enlarge it through hydraulic sandfilling and that the size of what came out was an enlarged island in the shape of a banana. Since that area of Lagos is assumed for the upper class, LKJ concluded: