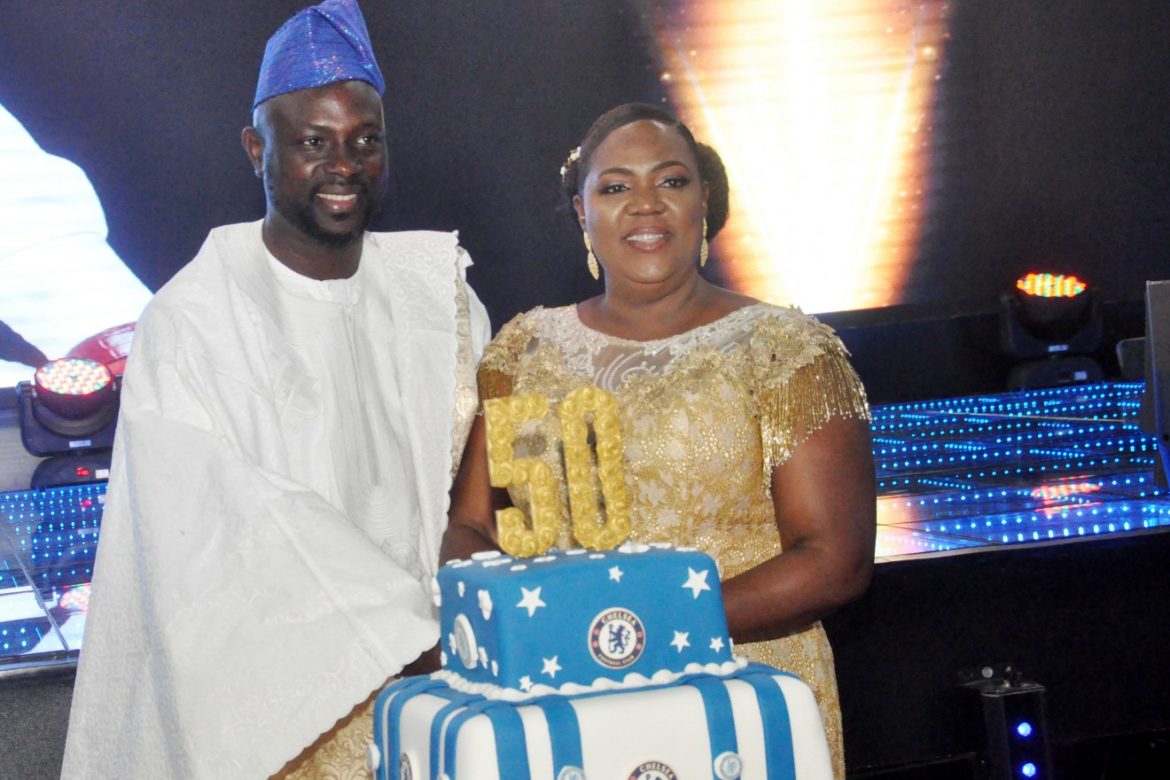 Details Of The Classy Birthday

The prestigious venue for the 50th birthday of Pastor Femi Faseru was KICC Dome in Maryland. It is the church auditorium that was beautifully converted into a banquet setting. From the entrance of the church, you would have noticed the new look the church is wearing. From the colors, the decorations, the picture portraits, and the walkways, it was specially designed for the birthday party. All the guests had beautiful spaces to take photographs.

Walking straight into the dome you meet with an array of ushers who walked guests straight to the cocktail arena. There was a cocktail section for about an hour before the major party started. Guests also had the time to check their seat and table numbers while sipping their drinks and munching some appetisers. The colourful white and gold decor was out of this world. All the table settings were neatly done and the ambience of the dome just keeps shouting, come and have some birthday fun. The colourful all access card event was glam in all ramifications.

THE GOLDEN BOY AT 50

Pastor Femi Faseru stole his own show. He was looking dapper in a tuxedo suit for his photo sessions and changed into an ivory color Native wear for the birthday proper. He looked dashing and never looked 50. Very young and fresh at that. The love people bestowed on him was overwhelming and even the tributes kept flowing in torrents. He was obviously humbled by all the good things said about him. He really clocked the golden age in style. He sits atop pastoring KICC in Nigeria and he’s very popular with his TV and Radio programmes which have won many souls for Christ.

Beautiful Pastor Mrs. Sade Faseru stood solidly behind her husband all through the party. She was dressed in a lovely gold dress which complemented her stature. She was all smiles as many people came together to celebrate with her husband. She also turned 50 recently and her age surely looked good on her. She was with her daughter, Ifeoluwa who gave the beautiful opening remarks.

The former Archbishop of Lagos, Anglican Church Communion, Bishop Ademola Ademowo and his wife were at the event. Pastor Ademowo led the birthday party proper by rendering the opening prayer. He was also called out to give his tribute where he disclosed that he has known the Faserus as far back as the 1980s when he was their bishop at Ilesha for over 20 years.

Pastor Femi Faseru’s mum, Modupe made it to her son’s party. The woman who is in her 70s looked beautiful in a gold native wear. She was also celebrated at the birthday and she was a happier mother seeing how people showed love to her son. Mama has 6 children. Her husband, Late Chief Ayorinde Faseru who is Pastor Faseru’s father was a Chief protocol officer to many Governors when he was alive and the Major Distributor of Peugeot cars in Nigeria.

The relationship between the Ashimolowos and the Faserus was an ordained one. From the very first day Pastor Ashimolowo spotted Pastor Femi, theirs was a connection made from heaven, no wonder Pastor Matthew and Yemisi Ashimolowo gave a mind-blowing tribute on why they hold Pastor Femi in high esteem. They lauded his achievements as he had made the vision of KICC come to reality. They have grown so close that pastor Yemisi Ashimolowo revealed that it is not easy to have 2 Pastor Matthews as they talk and also behave alike.

OVER 50 OF HIS FRIENDS STORMED THE PARTY

It’s not because Pastor Femi is a pastor that people swarm around him but because he is a good man and most of his friends were the ones he majorly had even before he gave his life to Christ to serve him fully. Many of his friends were there to support him. There were some whom he attended secondary school with and others he met in the course of his pastoral duties. Some of those present were Gbenga Aluko, Chief Dele Momodu, Kola Aderibigbe,Tunji Omole, Lekan Olashore, Gbenga Olunloyo,Ladi Oguneye, John Darlington, Jolomi Ideh, Past captains of Ikeja Golf club, Femi Osibona and Co.

Pastor Femi’ s birthday was very colorful. His amazing life is a testament to God’s grace upon his life. His journey from the life he once used to live, to becoming a pastor was an interesting one. The theme of his birthday was “the journey and people in the journey”. It summarises the story of his whole life and most especially how he came about God. It was indeed an interesting session where a detailed compilation of his life from birth was shown in a documentary.

The beautiful birthday cakes were 2. The coordination of the cake cutting was done by Pastor Funke Adejumo, wife of the President of Agape Christian Ministries. The female pastor who is very popular was applauded after the detailed coordination and she also prayed for the celebrant.

CLAM PASTOR, WOLE OLADIYUN AND WIFE WERE THERE

The powerful man of God and founder of Clam Church Worldwide, Wole Oladiyun was at the event with his pretty wife, Lara. They were one of the early callers at the event. They sat on the VIP table where other pastors were sitting.

Pastor Femi Faseru comes from a large family but 6 from his mum. Some of his siblings were at the party. His siblings are Pastor Tola Faseru, his elder brother who is a pastor with Christ Embassy. He worked in the banking industry before going into private enterprise. There is also Professor Babalola Faseru, who is a professor of Medicine at Kansas State University, USA with a special interest in public health. His sister, Tomi, is married. She works with Heritage Bank. His second sister is a lawyer. His younger brother is making waves in Nollywood. He has featured in Jenifa’s Diary and some other movies. Others are Oluwagbemiga Faseru Alalade, Wole Faseru, and others.