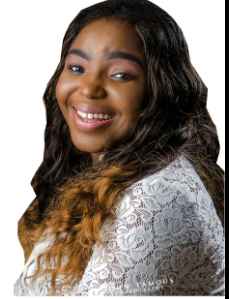 A few years back, Ifemide hit the limelight as a Gospel Singer in Nigeria. She was under the management of late Prophet Ajanaku who promoted her music. She was a little girl then and she dazzled everyone with her sonorous voice. The late Prophet Ajanaku discovered her and predicted that she was destined to make it, musically.

Ifemide has now grown  to be a big girl in gospel music. She performs at several shows and  her music is in high demand. Last week, this pretty lady spoke to City People Magazine Publisher, SEYE KEHINDE about her career progress since Prophet Ajanaku died 5 years ago. Below are excerpts of the interview.

How has your music career been?

So far, so good. I thank God. It’s been worth it. Its been 3 years now. In the last 3 years I have been able to get into the film/movie industry. I have done a couple of sound tracks. I have waxed 2 albums. The 1st one is Ifemi si Olorun Ajanaku. It is an appreciative album. The 2nd one is Yin Oluwa (Praise God). That was launched last year. So far so good.

You belong to the gospel music sector. In what way do you think we can enhance that genre of music? What are your plans?

We have to work more on our technicals, like producing good sounds, we shouldn’t limit our music to old type music alone. We should bring some kind of Juju into Gospel music, danceable boats and lots of good instrumentals, adding some additional instruments like some ancient instruments that have not been added before and combining those instruments together to make melodies. I really want to make a difference in my sound so that when people listen they will know its me, especially when they listen to my instrumentals they will be able to guess right that this IFEMIDE. I am working basically on that.

Ifemide always looks shy, calm and collected. Is that the real Ifemide? Or are there 2 sides to IFEMIDE?

That’s my personality. I am just like this. I am a very calm person. But when I get into my work, a different kind of me comes out. I was groomed in a disciplined home.

I am the first out of 4-2 boys, 2 girls. My dad died about 13 years ago. So we were practically raised by my mum. She is a strict woman. I was  born in Ondo State. I was born in Ondo town. We moved to Owo because my dad worked in the Foresty department, so we kept moving with him. Whilst growing up we were closer to my dad, than my mum because my mum was too strict. He was more understanding than my mum. My mum didn’t like music for anything but her mentality changed when she came to Lagos about 3 years ago, when I was launching my 1st album. She was shocked. She was amazed that her daughter could be launching her album in Sheraton Hotel and saw all the VIPs I invited to the event. From that point, she became a counsellor to other parents to allow their children follow their dream. So, I come from a vry, very strict home but thank God, all of that has shaped me into who I am today.

When you were going into music did you tell your mum? Did she give you permission to go into music?

No way. I didn’t take her permission. I remember I was in Abuja when I had the first invitation to take  part in a show, to sing publicly. That was in 2013. I had not even started professionally. They just saw me on social media and invited me. I didn’t tell mum. What I did was I just told the church to pay my honorarium to her account I now left for Lagos. When I got to Lagos I got her call asking where I was, I said I was in Lagos. I told her I came for ministration. That they’ve paid my honorarium to perform, which they paid into her account. She said Yes, I saw it I said yes thats the money. I have to work for it. That was the 1st liberation I had. She wasn’t in support of anything music. I remember I had to sneak out on different occasions to sing. My mum is into Timber so she has lots of people who know her well. Those who saw me sing and perform went to tell her. They call her Madam wood. They will say Omo Madam wood niyen. She will come home and say to me. I have been told you went to sing yesterday.

So, you want to pursue this music begging business. My mum does not really like the musical part of me. But my life has actually given her a different orientation about music. Its generally believed that children that are not serious or its never-do-wells that go into music. For now, she is seeing me doing well in music and making a good name for myself in the industry.

The other day, she was buying fuel at the feeling station and she heard my song. She was happy. She said that’s my daughter. I give it up to her. The training she gave to me then actually helped me create a niche for myself in the industry.

I attended St. Louis Nursery and Primary School, Owo, Ondo State. I left there for a Girls High School, a Missionary school and presently I am at Muson Centre Onikan for training in music, am doing a course in Keyboard and Voice Training.

If you think back, at what point, at what age did music first cross your mind?

It was in my Primary School days. At the Assembly grounds one morning, it was boring. The Holy Spirit told me that Ifemide you can play drums. I stylishly walked up to the drums. That was my 1st encounter with music. I was in Primary 4 then. That was the 1st revelation about myself musically. When I started I discovered that I had skills in Keyboard and I started working on myself. Funnily enough, nobody had that musical thing in my family. So, I just discovered myself. When I was in Primary 4. I discovered music is in me and it started growing and growing till this present time.

How did you meet Pastor Ajanaku? Were you already into music or he took you into music?

I was already into music but not professionally. I wasn’t into music professionally. Thank God for Facebook. I met Pastor Ajanaku through Facebook. We chatted a couple of times. There was a friend of mine also on Facebook, we’ve never met but we talk very well. He attends Pastor Ajanaku’s church too. He told me about a programme they wanted to hold at a point in time in Pastors Church. I told him if I am chanced I will come. He gave me Pastors telephone number. Then I saved Pastor’s number on my phone. I didn’t go and I didn’t talk to Pastor except once that we chatted on Facebook, I didn’t talk to Pastor again after that. I remember, December is Imeko Celestial Festival. A promoter took me there just to go and perform. When I got back to Lagos after the show I sent a general Xmas message to all my friends. Pastor Ajanaku was one of those who received the message. He called me on 31st of December 2013 and he greeted me and said can you see me? And that was all.

So, I went to his church, we discussed music. He adopted me as his child. As a matter of fact, he sponsored my first record then called Ifemi si Olorun Ajanaku but we didn’t complete it before he passed on. We were still working on it when he passed on. His wife picked up that project and  we were able to complete it. That was why I named my first album Ifemi si Olorun Ajanaku. It was a kind of appreciation album, just to appreciate everything that he stood for in my life. That was how we met.

When he picked you up, did it mean you had to change your church to start attending his own church?

So what was his contribution to your career?

I tell people that everyday I wake up, even till now, the first thing that cross my mind, that I see around  me as been productive, are things he actually planted into my life. Because I had no experience about music. Literally, I was just a young little girl, enjoying life. So, he imbibed in me a kind of boldness that I never believed could actually be found in me. He contributed tremendously to my music. I knew him for just 6 months before he passed on. But for the period of that 6 months, he mentored me well and he prepared my mind for the outer world. He made me understand the good and bad of everything. When I was even with him I came across controversies, from the very month I got to know him. A lot of controversies arose then. I started training myself, with his guidance. He made me understand that controversies must come as I am beginning to get into the larger world.

He now taught me that if I really want to do that, I must be prepared enough to face the world. He really imbibed a lot in me. He put a lot into me. He helped me with connections. He organised Press Conference for me.

How old were you at that time?