How Nigeria Has Become Hooked On China For Everything 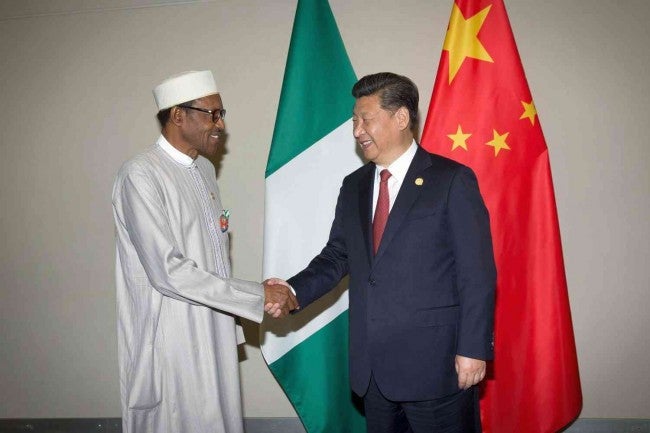 Do you know that almost 80 per cent of what Nigerians consume wear and use today are from China! The figures are there for everybody to see. And it is obvious for anyone to see. Take a look at Transportation Industry, Aviation, Textile, automobile and many others, China has the dominating factors. They control the Nigerian economy. They can’t joke with Nigeria. This is their testing group for products. This where they sell their goods and services. They (China) are aware of the large population and they have keyed in to take advantage of it. Nigeria has the largest population in Africa. No wonder, China has since positioned herself to take advantage of this expansive market by unleashing her horde of investors and businessmen on the manufacturing sector. From textile to garment; household appliances, furniture, automobile; consumables and iron and steel as well as Financial Technology (FinTech) products, China has taken over, churning out tons of products for various segments of the market.

Today, the investments of Chinese companies are worth over $20 billion and still counting. In a recent interview, the President, China Chambers of Commerce in Nigeria, Ye Shuijin, said, “The 160 Chinese firms operating in the country had also employed over 200,000 Nigerians. I believe the Chinese investment in Nigeria now is about $20billion and we have employed over 200,000 Nigerians. Our workforce is 95% Nigerians.”

With an estimated 203.42 million population and growing at over 2% per annum, Nigeria ranks the seventh-largest country in the world./ The nation represents over 70% of the effective West African market,/ as Nigeria remains the most competitive destination for the establishment of medium and large manufacturing industries.

No wonder, China has since positioned herself to take advantage of this expansive market by unleashing its horde of investors and businessmen on the manufacturing sector. From textile to garment; household appliances, furniture, automobile; consumables and iron and steel as well as Financial Technology (FinTech) products, China has taken over, churning out tons of products for various segments of the market.

Fintech industry has been thriving for a few years, a development that attracted some Chinese firms to Nigeria. Among them are OPay and PalmPay, just to mention two few.

Several Chinese companies are now competing with their Nigerian counterparts in the real sector. For instance, Chinese-owned Western Metal Products Company Limited (WEMPCO), a multi-billion naira integrated steel mill, situated at Magboro, on Lagos-Ibadan Expressway, Ogun State, is the first of its kind in Africa. The sprawling steel-manufacturing/ plant boasts of a production capacity of 700,000 metric tonnes and production machinery of five-stand Tandem Mill.

The factory, according to its Group Managing Director, Mr. Lewis Tung, will produce cold roll steel sheet of up to 0.15mm in thickness and coils of the same dimension and above. Other facilities in the plant include a 52-megawatt generator for power supply; a water treatment and recycling plant; a Ceramic tiles plant; an acid-generating plant; an air purifier and an annealing line.

The Chinese have been visible in the transport sector, especially in rail transport. The $1.49 billion Lagos-Ibadan railway contract has been awarded to China Civil Engineering Construction Corporation (CCECC) and the Olokola Deepwater Port project awarded to the China Ocean Shipping Group. The CCECC is also handling the 27.5-kilometre Marina-Iddo-Okokomaiko, Lagos Light Rail project.

Since 1995, the company has won many of the contracts linked with Nigerian projects, edging out interested companies from the United States and European nations.

The CCECC is involved in multiple projects across the country in about 22 major infrastructural projects over $47 million, comprising the construction of airport terminals, roads and rails including inner-city light rails in Abuja and Lagos, all financed with concessional loans from the Exim Bank of China.

Chinese firms are involved in three key projects in Nigeria’s power sector estimated at $10 billion. One of the projects, the Mambilla hydroelectric power plant, is for the delivery of a 3,050Megawatt power plant in Taraba State.

The $5.8 billion contract was signed by the FG and the China Gezhouba Group Corporation, Sinohydro Corporation Limited and the CGCOC Group Company Limited in November 2017, about 40 years after the idea was conceived. The China Exim Bank and other Chinese lenders will provide 85 per cent of the contract sum, while Nigeria pays the 15% balance.

Zungeru hydropower project is a 700MW hydroelectric facility also being developed with the Chinese assistance on the upper and middle reaches of Kaduna River in Niger State. Another power project with funding support from China is the $1 billion Gurara hydropower plant located in Kaduna. It has the capacity to generate 360MW electricity

Scores of Chinese businesses dominate the retail segment of the market in various parts of the country. Brands such as Viju Milk, Big Treat, Infinix, Guangzhou Automobile Group Company (GAC), Huawei, ZTE, Alcatel and others are household names Chinese restaurants, such Golden imperial Chinese Cuisine, Golden Gate, Lagos; Oasis Bakery all in Lagos and several other retail outlets businesses dot the landscape and they are enjoying tremendous patronage. Despite penetrating several industries and recording countless achievements in Nigeria, the Chinese seem to be unrelenting as they are craving for more investments. There is no stopping the Chinese.

From 2000 to 2011, there were approximately 40 Chinese official development finance projects identified in Nigeria through various media reports. These projects range from a $2.5 billion loan for Nigerian rail, power, or telecommunications projects in 2008to an MoU for $1 billion construction of houses and water supply in Abuja in 2009, and several rail networks.

Since 2000, trade relations have risen exponentially. There has been an increase in total trade of over 10,384 million dollars between the two nations from 2000 to 2016. However, the structure of the Sino-Nigerian trade relationship has become a major political issue because Chinese exports account for around 80 per cent of total bilateral trade volumes. This has resulted in a serious trade imbalance with Nigeria importing ten times more than it exports to Chin Nigeria’s economy is becoming over-reliant on cheap foreign imports to sustain itself, resulting in a clear decline in Nigerian Industry under such arrangements.

READ ALSO: THINGS CELEBS DO ON SOCIAL MEDIA DURING THIS LOCK DOWN

How Nigeria Has Become Hooked On China For Everything was last modified: April 15th, 2020 by Kelechi Okorie

Things Celebs Do On Social Media During This Lock Down