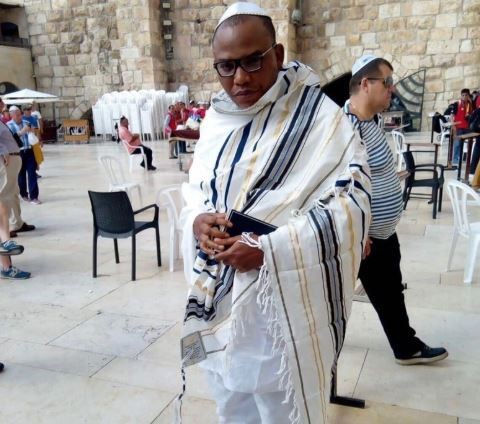 The parents of Nnamdi Kanu, leader of the Indigenous People of Biafra, IPOB, have finally been laid to rest in Afaraukwu community in Abia State.

The IPOB leader was last seen in Nigeria on September 10, 2017 after some soldiers invaded his residence in Afaraukwu community in Abia State.

Its believed in certain quarters that the traditional ruler and his wife died due to the situation surrounding their son and the Nigerian government.

In 2018, Kanu, however, resurfaced in Israel, where he was seen donning a Jewish outfit used for prayers.

Following his insistence for the actualisation of the sovereign state of Biafra, the Department of State Services, DSS, had arrested Kanu and arraigned him before a Nigerian court.

The IPOB leader was arraigned alongside three others, Chidiebere Onwudiwe, Benjamin Madubugwu and David Nwawuisi for charges bordering on terrorism and treasonable felony.

Following a public outcry over what many alleged tribal intimidation, Justice Binta Nyako of an Abuja Federal High Court granted him bail after which he eloped from Nigeria.

“Our leader is much engaged with diplomatic moves for Biafra restoration, we begged him not to come home, let those at home bury his parents. He listened to his people, that is why he changed his mind,” he said in confidence.