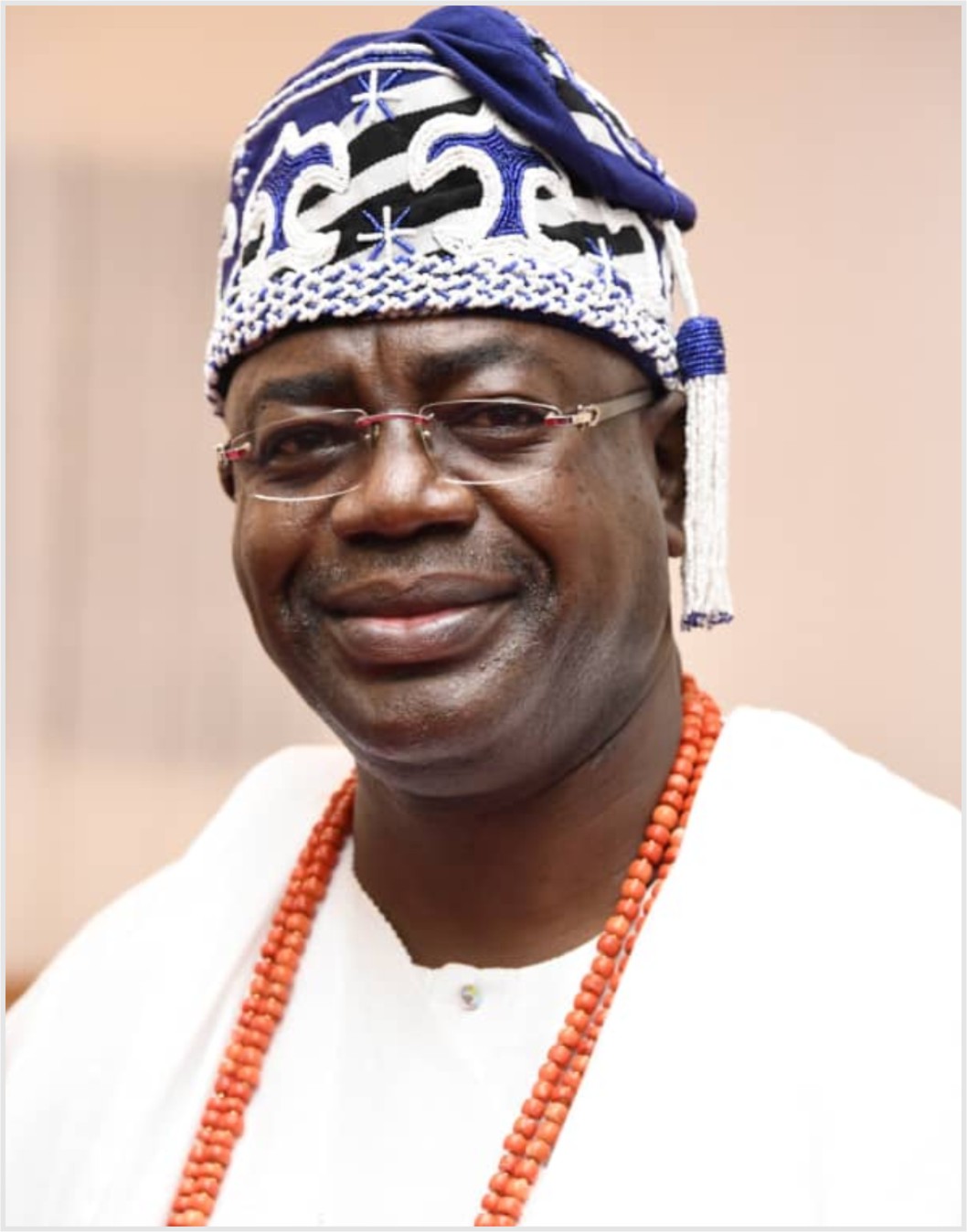 •What He Told City People Magazine

As you read this, the people of Ilara, in the Epe Division, of Lagos State are in a happy mood. It’s the 1st Coronation Anniversary of His Royal Majesty, Oba (Dr.) Olufolarin Olukayode Ogunsanwo, the 55th Alara of Ilara, Epe Division, Lagos State.

The celebration will run from Monday, 16th August 2021 to Sunday 22nd August 2021. The programme will start with Aje Traditional Celebrations at the Alara’s Palace, followed by Empowerment Programme and on Tuesday 17th August, there will be  Coronation Lecture at the Augustine University Auditorium Ilara to be followed by a Novelty Football Match. there will be a Health walk on Wednesday 18th August and the Laying of the Foundation Stone for a New Hospital Complex around Augustine University, along Igbonla Road. And on Thursday, there will be conferment of Chieftaincy titles at Alara’s Palace. Friday 20th will be Isese Day Celebration with Traditional Groups paying Homage to the Kabiyesi at the Palace. Then, Jumat Service follows at Ilara Central Mosque, and on Saturday 21st will witness a visit to the Orphanages and the Elderly in the community. On Sunday, 22nd August there will be Thanksgiving Church Service at St. David’s Anglican Church, Ilara and the Grand Finale will be at Alara’s Palace.

That Oba Ogunsanwo is celebrating is to be expected. He has done so well in just 1 year. A visit to Ilara will reveal what he has been able to do.

This tall and handsome Kabiyeesi has been able to give his people a sense of belonging. He has also been able to firm up security in his neighbourhood. The town has witnessed a lot of Growth & Development in just 1 year.

Let’s take you back a little. When news first broke in August 2020 that this popular Tax expert, Prince Olufolarin Ogunsanwo had been picked as the next Alara of Ilara Kingdom, near Epe, in Lagos, many were pleasantly surprised. At that time, not many knew he was a Prince because he didn’t quite flaunt it. They also didn’t know he was contesting for the vacant stool, until Sunday 16th August 2020 when Gov. Babajide Sanwo-Olu presented him with the Staff Of Office & Instrument of appointment at the Alara Palace, Ilaro, Eredo LCDA, in Epe, Lagos. It was a well-attended ceremony as all the big names in the Lagos State government witnessed the historic event. The Lagos State Deputy Governor was there. And several Commissioners, and top government functionaries.

Since then, this tall and handsome Tax Consultant who was the Lagos State Internal Revenue Service (LIRS) boss in Lagos State has spent the last 4 months settling in as the new King of this ancient kingdom. Once he became Oba, he took some quick decisions and steps which sent warning signals to all and sundry that the new King would not brook or tolerate any nonsense in his domain. His message has always been that of the Security, Peace and Progress of the Ilara kingdom. He believes once all these are in place, the kingdom will witness Growth and Development.

Let’s tell you more about HRM Oba Olufolarin Olukayode Ogunsanwo who was born on the 29th of September, 1967 to the family of Pa Tajudeen Olawale Ogunsanwo of Lapeni & Lebe Quarters of the Telade Ruling House. He attended Government College Ketu and graduated in 1984. He is an Alumni of Obafemi Awolowo University where he obtained his Bachelor of Science (Bsc) degree in Economics, a Masters degree (Msc) in Economics from the University of Lagos. He also holds a Masters of Public Administration (MPA) degree from Lagos State University.

He is a member of many professional bodies in Nigeria and Overseas, like Fellow of the Chartered Institute of Taxation Nigeria, (CITN), Member Nigeria Institute of Management, (MNIM), Member Institute of Directors United Kingdom. (MIoD), A professionally certified Taxation Expert in Administration and Consulting with over 25 years work experience. He joined the Lagos State Internal Revenue Service in 1991, where he had a distinguished career rising through the ranks and cutting across pioneer headship of various tax stations, Commissioner for stamp duties, Regional coordinator of a group of stations, Head of high-net-worth individuals and withholding tax and two-time board Secretary of the Lagos State Internal Revenue Service.

He was the Regional Coordinator of Lagos Island regional office in 2015 prior to his appointment in 2015 by His Excellency, Governor Akinwunmi Ambode as the substantive Executive Chairman of the Lagos State Internal Revenue Service. While he was Chairman of LIRS, he performed so well. He introduced innovative ideas to increase Internally Generated Revenue by blocking identified loopholes within the system, as well as restructuring Tax administration in Lagos state. He retired in 2016 and started his own practice in 2017 as the Managing Consultant at William Price Consulting Limited.

This ruggedly handsome monarch is widely travelled and has been conferred with various awards of Excellence, which includes, but not limited to: • Meritorious Long Service Award by the Joint Tax Board (JTB). • The Prestigious Leadership Award by the Fight Against Corruption, Organization (FACO) for his leadership and fight against corruption. He is married to a very beautiful Olori Bolanle Ogunsanwo and they are blessed with children.

Recently, the City People Magazine team of Publisher, SEYE KEHINDE and Head of City People TV, SUNDAY ADIGUN spent some quality time with the Alara at his private residence in Ilara, during which he spoke about his new life as the Alara of Ilara Kingdom, and the plans he has for his people. Below are excerpts.

Congratulations Kabiyeesi as the 55th Alara of Ilara Kingdom. How has life been, leaving the hustle and bustle of Lagos for Ilara?

I welcome you to Ilara kingdom. I have been on the throne since the 16th of August when I was coronated. The ceremony was done by His Excellency, Governor Babajide Sanwo-Olu of Lagos State. The experience has been awesome in that I translated from the corporate world, private sector, public servant to a royal father, a traditional ruler. They are 2 completely different things. But it has been a very, very awesome experience in that, I am in the midst of my own people now. I have been trying to acclimatise, to understand the challenges, which are not relatively new because I have always been with them. But now that I am their traditional ruler, I have been trying to marry the Culture and Tradition, with my own experience as a Public Officer. I have been trying to marry the 2 . So far, so good. It has been very nice. I am highly delighted to be back home to serve my people.

It has not been a bed of roses. When I got here, I discovered that there are so many things that needed to be taken care of, particularly in terms of Security, in terms of Welfare of our people, in terms of Education, in terms of Empowerment Programmes with a view to creating jobs.

How has the community been helping to resolve some of the challenges like security?

Yes, in terms of security, we are aware of what has been happening around us. We have the issues of kidnapping, cultism, drug abuse, the issues that are related to rape, and molestation, paedophile and molestation of young girls. And part of it has to do with unemployment in our society. One thing always leads to the other because like they always say, an idle mind is a devils workshop.

As a traditional ruler and head of the community in conjunction with other traditional rulers and other stakeholders, including the Local Government Chairman, as well as the security agencies, like the Police, Military, Lagos State Neighbourhood Security Corp, as well as the FRSC, and the Civil Defence, we normally meet and we have been trying to come up with the best way to tackle the issue of Insecurity. So far so good. We have been engaging the youths themselves to ensure that they do the right thing. We have been talking to their community leaders as well, the elders in the community, to ensure that their children and their wards are doing the right thing. In the immediate past, we all saw what happened a few months ago, in October. It is unprecedented in the history of Nigeria, whereby a peaceful protest, which was a lawful thing, constitutionally anybody can demand their right. But it was hijacked by hoodlums and these hoodlums are people who are jobless and who don’t have any meaningful source of livelihood. So, they hijacked a peaceful protest and they started destroying our common heritage, properties and monuments and they caused collateral damage.

The palace of Oba of Lagos was destroyed. The palace of the Elemoro was completely raised down. So many things were damaged.

But fortunately, around us here we didn’t experience such. That shows the extent that we community leaders were able to manage the situation. The Endsars riot was one of the immediate challenges that I faced a traditional ruler. We thank God that so far so good there was no incident. Nobody was killed or injured. We thank God for that.

That is one of the efforts I have put in as a royal father.

Tell us how you felt when you finally emerged as the new royal father here in Ilara kingdom?

I was very happy and elated, even though as a Technocrat, I never knew I was going to become a king. But when the Alara of Ilara Kingdom, HRM late Oba Akeem Okunola Adesanya passed on to join his ancestors, activities commenced for succession. He reigned for 58 years, close to 60 years. Many people had even forgotten that there existed a Declaration that states which ruling house will be the next ruling home to be king.

They had forgotten because my predecessor reigned for a very long time and the records are there.

So, when my people came to call me that it is time to choose another Oba, and I am one of the people they are looking at to take a shot at the stool, I was pleasantly surprised. I took time to think about it. I engaged my family and parents. I consulted far and wide and I prayed about it. When I was really, really convinced about it, I joined the race.

Initially, we were 13 Princes that came out. We were shortlisted to 8 and the 8 names were submitted to the kingmakers, out of which I now eventually emerged as the Oba-elect. I was highly elated and my people were very, very happy that it is me that they actually wanted and God has done it. So, it is a thing of joy when your people want you to come and serve them, having served the Lagos State Government for exactly 26 years. I was so happy and glad. I thank God and I give God all the glory for what he has done.