How OBJ & OONI Rallied Round OLU Of WARRI 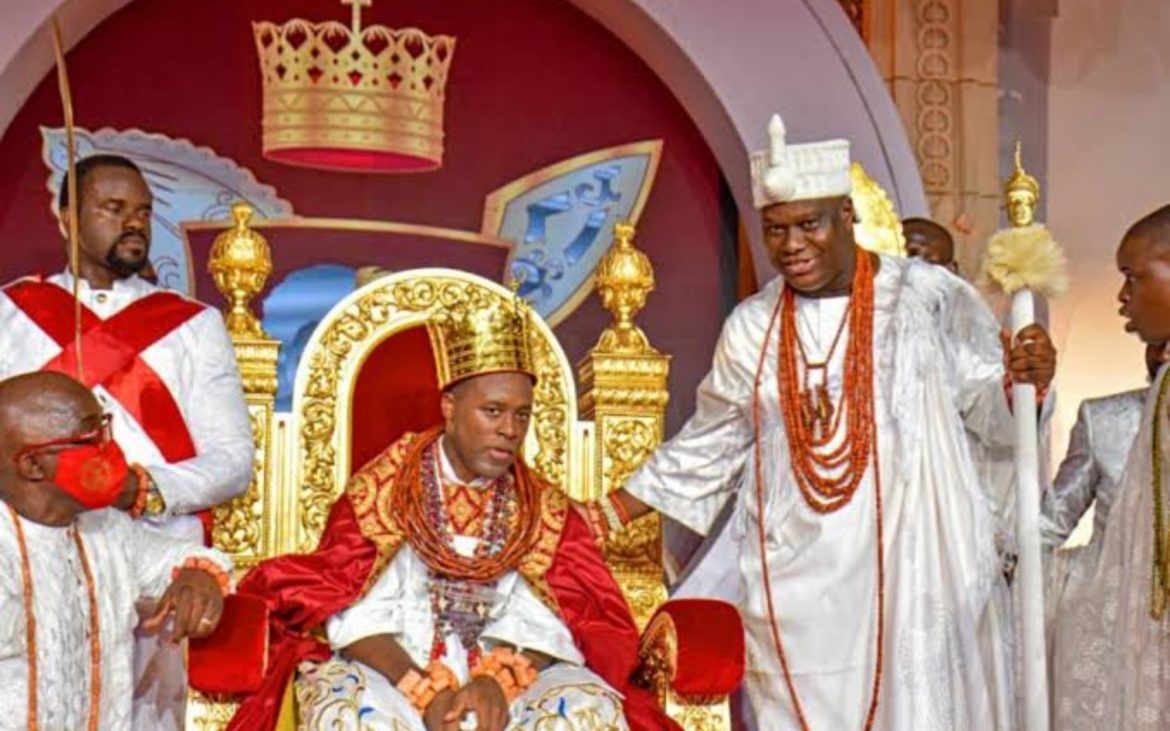 37-year-old entrepreneur, Prince Utieyinoritsetsola Emiko was, on Saturday, 21st of August crowned the 21st Olu of Warri, and had immediately assumed the title of Ogiame Atuwatse III. He was crowned in a colourful coronation ceremony at Ode Itsekiri, the ancestral home of Itsekiri nation in Warri south local government area of Delta State.

After his uncle, the 20th Olu of Warri, Ogiame Ikenwoli, passed away last December, there was a tussle within the royal family for his replacement. While one group supported the emergence of Tsola Emiko, who is the eldest son of the 19th Olu, Atunwase II; his late father, the other, led by Ayiri Emami, the traditional prime minister of the kingdom, thought otherwise. The story of the recent emergence of the Olu of Warri is an amazing cobweb that cannot be touched without the soul of the Yoruba people all over the world. It is a story that should touch the heart of any Yoruba leader that is conscious of Yoruba history and who understands what power is.

The Itsekiri are regarded as part of the extended House of Oduduwa by the Yoruba people. The Itsekiri language sounds like a distant dialect of the Yoruba language. Olu of Warri is regarded as a direct descendant of Oranmiyan, the most famous of Ife princes who was reputed to have founded both the Benin and the Oyo dynasties. Both Benin and Oyo were later to create large empires that dominated the eastern part of pre-colonial West Africa. When party politics came, it was not surprising that many elites of the Itsekiri identified with the Yoruba and the leadership of the Action Group (AD) party.

For a long time, the Yorubas cherished the historical and cultural linkage of the Itsekiri and the Yoruba people and It was therefore not surprising that many Yoruba traditional rulers, led by the spiritual leader of the race, Kabiyesi Oba Adeyeye Eniitan Ogunwusi, Ojaja II, the Ooni of Ife, former President Olusegun Obasanjo were present at Ode Itsekiri, to honour the new monarch. It was indeed a glorious day for the Olu and his people.

Thirty-four years ago, Chief Awolowo had also led a high delegation from the West to attend the coronation of the late Olu of Warri,, Godwin Toritseju, Olu Atuwatse II who is the father of the new Olu of Warri.

Two of the most prominent personalities from Yoruba heritage have also contributed greatly to how the new Olu of Warri emerged.

The newly picked Olu Prince Olusola (Tsola) Utieyinoritsetsola Emiko from the Ginuwa 1 Ruling House has a Yoruba mother. But there was a stiff opposition on that note from the conservatives. One of them, a highly respected leader and Chief, Emami and others were opposed to him.

Historically, there are 5 clans in Itsekiri- three of them from Yoruba and two from Igala and Edo. The Itsekiri law says any Olu MUST have Itsekiri or Edo mother. The idea is to preserve the purity of the royal blood so that you hardly would have someone that will enslave or sell the people now or in the future.

But the new Olu has a Yoruba mother, so they opposed him. The late Chief Obafemi Awolowo who is a Yoruba man never joked with Itsekiri. His last public assignment was the installation of the late penultimate Olu of Warri in May 1987. When Awo died, Warri received his body to lie in state on the extension of his ancestral land. No Yoruba man has ever been given such a rare privilege.

On this Warri issue, the Yoruba link with Itsekiri had been severed after Awo’s demise though sustained by Pa Adesanya and Pa Ajasin, two last icons who had a deep sense of history, same with Yoruba link with Oworro-the owners of Lokoja-Ilu ko Jo and Ogohi, Okun all in Kogi, and Olukunmi in Delta.

So it was Ooni who rose to the occasion to meddle the notion of how Itsekiri and Yoruba should unite together and make sure the young prince emerges as the new Olu of Warri despite that his mother is Yoruba. Ooni is a remarkable Oba who has impressive knowledge about his people. The request of Itsekiri was for Ooni to assert the Yorubaness and also send a high powered delegation to the Itsekiri General Global Congress.

Ooni had delegated Oore of Otun, HRM Oba Adekunle Adeagbo, a wonderful natural leader and another Oba from Osun, HRM Oba Akinola Akinrewa to represent Arole Oduduwa, Adimula Ooni Adeyeye Enitan Ogunwusi Ojaja 11. They attended the event and asserted that Itsekiri are Yoruba in the face of thousands of Itsekiri people.

The new Olu of Warri, Ogiame Atuwatse III, was crowned as the 21st Olu of Warri at Ode-Itsekiri, Isekiri’s ancestral home, in pomp and grandeur.

The monarch succeeded his father Ogiame Atuwatse ll, who died in 2015. Before ascending the throne, the 37-year-old worked in a government petroleum company and the private sector. During the coronation and thanksgiving service at the palace chapel, comments made by these two dignitaries caught the attention of guests.

The Ooni of Ife, Adeyeye Enitan Ogunwusi, spoke on behalf of traditional rulers in his capacity as the co-Chairman, National Council of Traditional Rulers of Nigeria (NYCN). Welcoming the Olu into the fold, the Ojaja II said the NYCN and the Oduduwa race were excited about his emergence.

“We are all very delighted to welcome you on board as one of our brother kings. I want to appeal to you, you are the father of the entire Itsekiri Kingdom now. “You are the father to the good and the bad. You have to embrace the entire kingdom of Warri and extend a hand of fellowship to all. Make sure your leadership is a fatherly leadership”, the Ooni said. In his remark, former President Olusegun Obasanjo urged the Olu to unite his people, seek elders’ counsel and stay close to God.

“Two things: Do not shun the experience and advice of elders; experience is wisdom. Be very close to God.

“You must diligently perform the task God has entrusted to you as this position was given to you by God.”Obasanjo told the Olu of Warri to always remember that “His Majesty” carries a lot of responsibilities. The Ogun-born retired General made headlines for kneeling before the monarch.

Obasanjo said he wishes not to see the fourth coronation of Olu of Warri because he has seen three in his lifetime..He called on the newly installed king and people of Itsekiri to work with the new monarch to work together towards achieving greater development in the kingdom.“I am one of the happiest on your installation because God has especially favoured me to see three Olus and I don’t pray to see the fourth one.

“I want to emphasise that the position you occupy today is given to you by God but with your own people surrounding you and you must always remember that.

“If God has given you a role to perform you will be offending God if you fail to perform that task,” he said.

Prince Omoba Tsola Emiko became the monarch of the oil-rich Warri kingdom at the young age of 37. He was born 2 April 1984 into the family of Prince Godwin Toritseju Emiko, the late Ogiame Ikenwoli Atuwatse II, and Gladys Durorike Emiko in Warri. He was born into royalty three years before his father became the Olu of Warri. He attended the Nigerian National Petroleum Corporation (NNPC) Primary School Warri, Delta State. He went to Adesoye College, Offa in Kwara State from 1995 to 2001. He attended Case Western Reserve University in Cleveland, Ohio where he earned a Bachelor of Arts in International Studies and Political Science with minors in History and Economics between 2002 to 2006.

He obtained a degree in  Masters in Science in Management from Case Western Reserve University in 2007 and returned to Nigeria in 2008 for his NYSC. He worked at the National Petroleum Investment Management Services (NAPIMS), Sahara Energy, Shell Nigeria Closed Pension Fund Administrator (SNCFPA). He went into private business and established Noble Energy Ltd and Corral Curators Ltd. He also sits on the board of companies such as Ocean Marine Security Ltd, Gulf of Guinea Ltd, and Vessellink Nig Ltd, among others. He is married to Ivie Okunbo, Olori Atuwtse III, the daughter of late billionaire Capt. Idahosa Okunbo in 2014.

How OBJ & OONI Rallied Round OLU Of WARRI was last modified: August 30th, 2021 by Tayo Oyediji