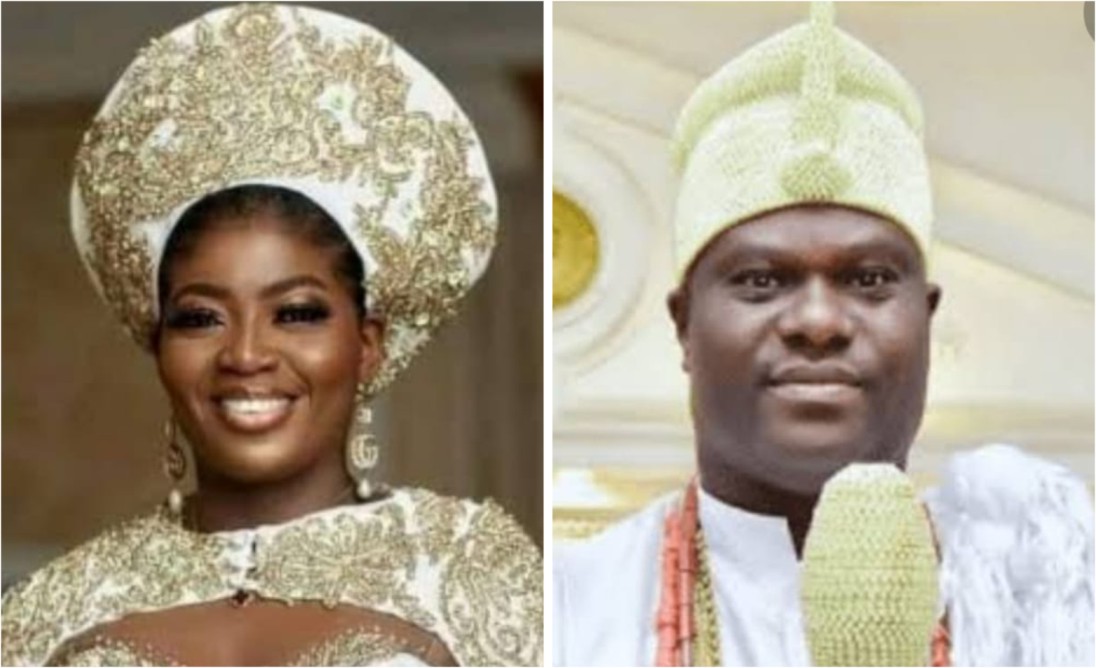 Princess Afolashade Adegoke is one of the beautiful and deeply cherished Queens of Ooni of Ife. Popularly known and called Princess Ashley, she is the latest big thing that has happened to Ooni of Ife in the last few days. She is the new queen of Ooni of Ife though she has always been a regular feature in the king’s life. In fact, they have been together for a little over 7 years now.

From a royal family in Ife, Princess Ashley Adegoke has relinquished her princess title for that of a Queen and not just a Queen, but Queen of the Source. She is now Queen Afolashade Ashley Ogunwusi. To say Queen Ashley is beautiful is simply stating the obvious; she is also very fashionable. She has some good qualities that have endeared her to the heart of the Ooni of Ife. Their royal wedding, which was classy in all ramifications, held on Friday, 14th October, 2022 in Ife. The wedding invitation which surfaced online was from the bride’s family, and stated as follows:

“The royal family of late Prince Adebiyi Adegoke of the Adagba Compound in Lafogido Ruling House cordially invites you to the traditional wedding of their daughter, Her Royal Highness Omo Oba Afolashade Ashley Adegoke and His Imperial Majesty Ooni Adeyeye Enitan Ogunwusi, Ojaja ll on Friday, 14th October, 2022 at 11am to meet with the groom (Ooni of Ife) at Enuwa Square, Palace of his Imperial Majesty. Marriage rites follows immediately at the residence of late Prince Adeniyi Adegoke, Ile-Ife, Osun State.” Queen Ashley isn’t a new entrant at the Ile-Ife palace. She is not a new lover in Ooni’s life too.

She has always been in the handsome monarch’s life even before he married Olori Wuraola (who left the palace and divorced the king). Queen Ashley also took a part of Oba Adeyeye’s heart before the last Queen that left the palace, Naomi Silekunola even became his Queen.

In fact, the Ooni of Ife, Oba Adeyeye Enitan Ogunwusi, who will be clocking 48 years, this week, would have married Ashley before Naomi but because Ashely is a single mum and the Ife tradition forbids such, especially if the person is coming in as the First Queen.

The love story between Ooni of Ife and Queen Ashley is well over 7 years. They have always been an item. In 2017 when Olori Wura left, everyone thought Ashley would replace her but the fact that she had become a mother before meeting the Ooni became the obstacle. Ashley relocated to Ile-Ife from London the moment Oba Adeyeye ascended the throne and has refused to leave the palace ever since.

Though Olori Naomi was then recognized as the first of Queen in the palace, she and her family members who lived with her, knew that Ashley was not one to be toyed with. They all know Ashley is a no-go area and the Ooni doesn’t tolerate any form of disrespect towards his beautiful Ashley.

Recall Ashley was unveiled as the latest queen during Ooni of Ife’s 47th birthday a year ago, Even Olori Naomi then acknowledged the presence of some queens in the palace, while giving her vote of thanks at the surprise party organised for the king last year. She referred to Ashley as the Princess of the Source and prayed for more queens in the palace, which is what is happening right now.

Queen Ashley has constantly celebrated Ooni of Ife on his birthdays over the years and the messages are always loaded with love notes. In fact, she often reveals that Ooni is her crown jewel.

In one of her birthday shout-outs, Olori Ashley referred to the monarch as ‘my crown.’ She refers to herself as the King’s wife as well, “Omo Olofin, Aya Olofin, Aya Osha, Aya Adimula’.

She wrote in the birthday message to the Ooni, “To know you is to LOVE you… Father to the nation, husband to many… Oko Osho… Oko Opo.. Oko Aje… Ekun Omo Giesi.. Orisha Oke ti gbogbo Orisha ile ngba fun…Orunmila Oko ODU…Dagunduro…Akande Ajiwe fun’osha… Olori Alade Gbogbo…Okirikiribiti….Igba Odun Odun Kan ni. If I could give you a gift, it’ll be to see yourself in people’s eyes and see how special you are to many. Cheers to many more years in good health and abundance of wealth ni Ase Olodumare. Happy Birthday, my Crown Jewel ODU Aya Osha… Aya Olofin…Omo Oba”.

Not a few followers of the Ooni on social media were surprised when Olori Ashley referred to the monarch as ‘my crown” in her birthday shout-out. Even on her Instagram page, she wrote, “I am a princess of the source of Oodua… Aya Osha, Aya Adimula, Aya Olofin, Omo Olofin who can NEVER be duplicated, imitated or intimidated… Call me PAAA. Afolasade Ashley ODU Aya Orunmila.”

Moreover, she also shared a throwback photo of her sitting on a royal chair in the Ile-Ife palace as far back as in 2017.

She wrote on the post, “#throwback2017 .To be a shinning STAR… it comes with confidence… you must know WHO you are, WHERE you are from and WHAT you carry… don’t run anyone’s race… run yours.. shine your own light, follow your own path, don’t worry about any darkness or negativity because that’s when the stars shine the brightest… Aya Osha … Aya Adimula… Omo Oba… So proud of who I am… Afolasade Ashley ODU Aya Orunmila.”

This definitely confirmed that her love affair with the king had been functional before the past and current queens. Another hint into their years of romance was when Ooni Ogunwusi marked 6 years on the throne.To mark the sixth anniversary of the king on December 7, 2021, Olori Ashley wrote on Instagram:

“Six years has flown by so quickly, I see and pray for many more years to come on the throne of your forefathers Omo Ajinaja Ogun. Akande Mii Ajiwe Fun’Osha, Okirikiribiti, Dagunduro Oko ODU… Iti Omo Irumole, Ekun ton fin tori tori, Ekun ton fin tiru tiru, Adigimala awo funfun, while others search for what they can take, you have taken the weight of the world on your shoulders and always search for what you can give back. Your ascension on the throne has changed a lot of lives, not only in Ile-Ife but the entire black race. A true king’s power is his compassion which you show effortlessly. We acknowledge the good that we have in Yorubaland which is you my crown jewel and for us, it is the foundation for all abundance. Ade a pe lori yin, Ase a pe lenu yin, thank you for all you do for humanity. To many more years on the throne of your forefathers, in good health and in abundance of wealth. I remain Aya Oba, ODU Aya Orunmila, Aya Oosha, Aya Olofin Adimula, Omo Oba.”

The palace is not new to Queen Ashley and she has never disturbed any other queen who comes in.

She is about the longest person that has been with the  Ooni, won his heart, and stayed till their marriage was consummated. Queen Ashley is a Chartered Accountant and currently runs an NGO that caters for less-privileged kids and widows through the Ashley Adegoke Foundation.

She has a Masters in Accounting and Finance from the University of Greenwich, and currently runs her businesses in the United Kingdom.

The beautiful mother of one is a dazzler anytime and this has shown in the way she combines her outfits and dresses up generally. No wonder she slayed in all her outfits for the royal wedding!

The new 4th Olori is a Princess of the royal clan of Ile-Ife from the Lafogido Royal House and Adagba Compound. For that matter Lafogido is one of the 4 ruling houses of Ile-Ife. He late dad, Prince Jacob Adebiyi Adegoke was a true born Prince of Ife. That explains why she refers to herself as HRH Ashley Afolashade Folakemi Adegoke.

According to her bio, she is a Chartered Accountant and a philanthropist. She has a Bsc in Accounting and an Msc in Accounting and Finance from the same university, University of Greenwich. She is a UK-based businesswoman and the CEO of RisenCrown Ltd and a franchise owner of Triple Two Coffee Intu Lakeside Essex.

In terms of her philanthropy, she is the founder of the Ashley Adegoke Foundation, which was so named to honour the memory of her beloved father. She is a blue-blood who has succeeded in putting smiles on the faces of orphans, widows, single mums, and the less- privileged in the society.

Meet The Candidates For The 14 OYO House Of Reps Seat